Why do teenagers rebel? Thoughts from a 19-year-old who didn’t

If you recall, Older Daughter just turned 19. She's been a model kid -- respectful, helpful, not given to angst and drama.

It's the same thing with Younger Daughter (age 16) -- no angst or drama, lots of respect. We definitely lucked out in the kid department.

Adolescence is always a dicey prospect for any parent. I've known kids with lousy parents who turned out great, and I've known kids of terrific parents who were anything from a handful (at one end of the spectrum) to horrible (at the other hand). Teenage rebellion is always tough, but eventually it's up to the teens themselves to decide whether to straighten out by the time they're adults (as most do) or whether to embark on a lifetime of bad choices and rotten behavior that will affect them (and their own children) for decades.

There is no cut-and-dried formula to get kids through their teenage years without rebellion. Variables include the personality of the child, religious influences, schooling methods, and of course parenting strategies. There is absolutely no one-size-fits-all approach that works for everyone.

But recently I found a fascinating column in which a mother asked her 19 year old daughter to articulate just why she didn't rebel. In response, the daughter wrote an astoundingly insightful essay (they're Canadian, hence the slight variation in spelling). 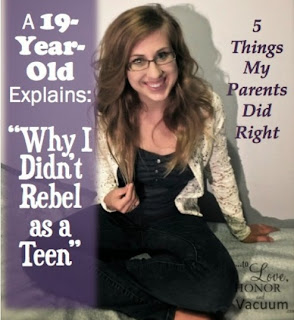 Here are the five primary points this teen raised:

• My parents instilled in me a sense of family honour

• My parents were extremely encouraging, but also demanding

• My family talks about everything

• We were never expected to rebel as teenagers

• God was centre in our home

While this young lady's explanation won't guarantee a home free from rebellion and strife, I found her insight fascinating. Well worth reading.
Posted by Patrice Lewis at 7:22 AM