I'm in shock. Sticker shock, that is.

We're working on an order of tankards. The customer would like them later this week, so Don's finishing up sixty pieces. He shot them with the first coat of varnish, then waited until they dried so we can scratch them (with 000-gauge steel wool) and brush them, then shoot them a second time with varnish. 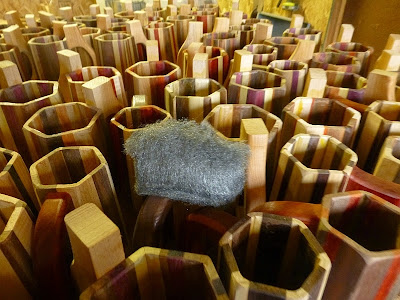 But we were out of steel wool, so I volunteered to go to the hardware store to get some.

"While you're there," said Don, "could you pick me up some tomatoes?" My hard-working husband asks for very little, so a few out-of-season tomatoes is a treat I'm not going to deny him.

So off I went -- with $18 in my wallet. No problem, right? I mean, how much could a few tomatoes and some steel wool come to?

Well as it turns out, $19. I had to scrabble some coins together from the dashboard of the car to finish paying for everything.

The tomatoes were $2.99/lb. The total for five tomatoes came to $7.05. This was so startling to the checkout lady that she rechecked both the weight and the price, then shook her head sadly as she bagged them up.

At the hardware store, I confidently expected my remaining $11 to cover two bags of steel wool. Wrong. Steel wool, it seems, is now $5.99 per bag. As I said, I had to scramble for the last few coins to complete the sale. 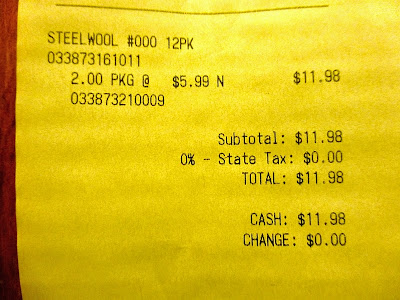 I got back into the car stunned at the cost of these two items. It's not like I haven't had sticker shock before. But for Pete's sake -- $19 for two things...??!! 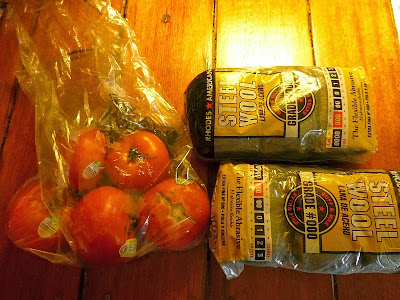 Therefore it was with grim amusement that Don forwarded me a ZeroHedge article on the official "lack" of inflation. This came on the heels of two articles linked on Drudge about the increases in food and electricity prices.

The ZeroHedge article is amusingly entitled There Is No Inflation (Unless You Eat Food, Use Water, Live In A House, Get Sick, Go To School, Or Do Taxes). It illustrates how deliberately manipulative government statics on inflation are for the common person. These number-crunching bureaucrats apparently never take a jaunt to the store for tomatoes or steel wool and leave with moths flying out of their wallets. 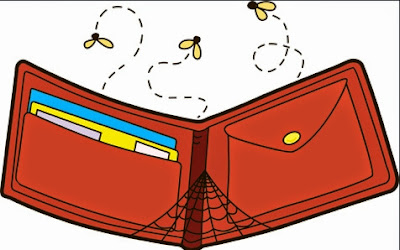 The article had a table showing the annual price increases for items that might impact your life on a daily basis, such as meat (up 12.7%), eggs (10.7%), fruits and vegetables (up 4.1%), butter (22.5%), and hospital care (up 4.9%). The funny thing is, ZeroHedge got these figures from an "official" government site. We already know they massage numbers -- so these price increase represent the massaged numbers. Are we having fun yet?

Yet another article noted, "Data released today by the BLS indicates that the electricity price indexes hit all-time highs for the month of December and for the year. 2014 was the most-expensive year ever for electricity in the United States."

But remember: "Inflation? What inflation?"

The bottom line, folks, is we are having the (steel) wool pulled over our collective eyes by those who want to convince us the economy is just ducky.

I challege the pencil-pushers at the Bureau of Labor Statistics to go shopping for two items with $18 in their wallet, then tell me to my face there's no inflation.

Okay, rant over.
Posted by Patrice Lewis at 6:53 AM