A friend sent me a link to an article called Parents' Worst Nightmare: Kids Are Jealous of 'Teen Mom' Stars. My friend called it a tragic piece of journalism.

It seems there are reality TV shows depicting teenage mothers and what their lives are like. We don't have television reception so I was unaware of this genre of reality programs. 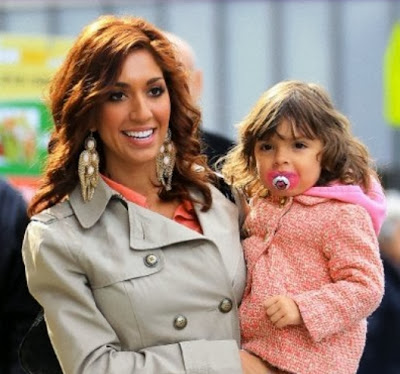 Apparently the shows were filmed as cautionary tales against teen pregnancy. However a study found -- what a surprise! -- that "young fans of these two series are shockingly envious of the shows' stars." The reason, apparently, is because these teen moms "have an enviable quality of life; high incomes; supportive, loyal romantic partners; and children who are cared for well."

Even though the shows are supposed to be "cautionary," impressionable viewers doubtless get these reality teens mixed up with single celebrity moms who "have the time, money, and hired help to squeeze in red-carpet appearances, European vacations, date nights and parenting duties."

I hate to break it to teens, but motherhood -- especially single motherhood before you're 18 -- bears absolutely no resemblance to Hollywood moms. In other words, reality trumps reality shows.

The article states, "What could possibly be enviable about the lives of single, teenage mothers? Let's see. Janelle Evans, 21, mother of a 16-month-old son has battled a heroin addiction and has multiple arrests under her belt. In 2010, she lost custody of her son, and she is currently pregnant with her second child. Farrah Abraham, a 22-year-old with a 3-year-old daughter, made a sex tape with porn star James Deen and is now starring on VH1's "Couples Therapy." And Amber Portwood, 24, mother of a 4-year-old daughter, was arrested for domestic violence in 2010 after beating her child's father in front of the little girl. She recently admitted to Us Weekly that she was high on drugs for most of the filming."

I wonder if any of this misbehavior was documented on the show?

My friend who sent me this link confirmed these dire statistics. She wrote, "One of the show's 'stars' resided a county over from our hometown. She is constantly in the news for probation violations, arrests, etc. Awful to think she is a role model for young girls. Grrrr."

Up to this point I thought the shallow writers at Yahoo handled the subject quite well. But toward the end of the article I saw this... and my jaw hit the floor:

Let's be clear: There's nothing inherently wrong with choosing to be a single mother if you're mature, responsible, and financially independent.

Okay. There's "nothing wrong" with intentionally depriving your children of a father's love. I see.

Idiots.
Posted by Patrice Lewis at 5:28 AM