"An era of indulgent slothfulness..."

Right now the midwest is having historic bitter cold. New England is seeing massive amounts of snow from blizzards. Chicago just had an enormous snow dump as well. In short, in many parts of the country it's good weather to hunker down, if possible. Drink hot tea/chocolate/coffee, simmer a big pot of soup on the stove, listen to music, play board games or cards with the kids, or read a good book.

Now maybe I've lived in the country for too long, but when reader Rob forwarded me an article on the etiquette of ordering takeout food during a blizzard, at first I thought it had to be a joke. Who in their right mind expects food delivery during a blizzard? 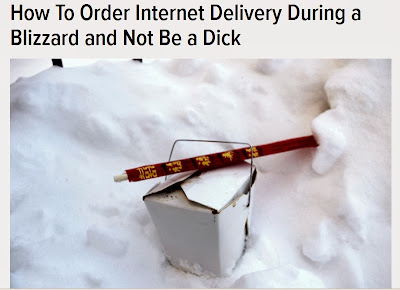 Is this something peculiar about urban living? Do people think food delivery is done by machines who don't feel cold or experience wind-chill? Whaaaaat?

But no, this was a serious (more or less) article (with an occasional expletive) with advice for people who don't want to put on pants and walk across the street to get orange juice and a bagel.

"If you live in the blizzard-ridden United States," it begins, "you might be looking out your window at a harsh, desolate, snowy wasteland. Cars in the middle of the street. Frosty despair. But you're also hungry. Here's how to order in, guilt-free."

The "guilt-free" solution, apparently, is to call ahead to see if your favorite restaurant is even delivering (this is because apparently there are now intermediary websites that take your order and relay it to your local restaurant). You're also supposed to NOT complain when your food is two hours later than normal, and please tip very generously.

"[I]t's important to reconsider, just a bit, the way you deal with the Internet Instant Food God," the article gravely informs us. "Namely, that it's powered by the service of human beings, who on snowy days in particular, deserve some extra consideration. Above all, consider the fact that delivering food to you is going to really suck for the exact reason that you don't want to go out and get it yourself. Pants will become snowy and wet, bicycles will slide around on ice, and beards will be caked with vicious snow. But this will all happen to someone else! Someone bringing you food. Tipping reasonably is always the decent thing to do, but under conditions that might look like a scene from a science fiction movie, you've got to keep others in mind. This ain't business as usual."

Um, then why the heck are you asking these hard-working delivery people to venture out into the blizzard you yourself don't want to risk? Am I missing something here?

Or, as Rob bluntly puts it, "Buy a flippin’ cookbook. Start here if nothing else. If you can use the internet to order food, you can use it to learn to do your own!"

These are not hardship cases we're discussing. These are not people who are destitute and hungry. Besides Rob's obvious point that if you have the internet to order food, then you clearly have power, I'll add: If you have the money to buy takeout food, you have the money to buy the ingredients for a hearty chili. In other words, there's not much excuse to drag some poor fellow through a blizzard to your doorstep just because you're too lazy to cook your own meal.

The article author admits, "The advent of online food delivery has ushered in an era of indulgent slothfulness..." No argument there, bub.

Not incidentally, Rob's subject line for this article was, "Why cities are set to starve out."
Posted by Patrice Lewis at 8:51 AM