A few years ago, our neighbors got a beautiful Jersey cow. Since she was lactating but didn't have a calf on her, they were plunged into a strict twice-a-day milking schedule that got a bit overwhelming at times. After a few months they asked if I would be interested in milking twice a week (and keeping the milk) in order to give them a bit of a break. 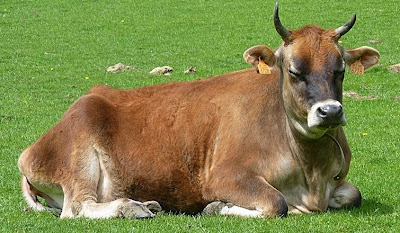 Since I wasn't milking at the time, I said sure. This was my first introduction to the lovely Jersey breed, whose rich creamy milk is justifiably famous.

Eventually the neighbors got a single-cow portable milking machine. One day I watched as this contraption was strapped on top of the patient cow's back, with straps going around her belly and little suctions that attached to the teats. Turn the machine on and vroom crank crank crank crank -- the cow was miked out in above five minutes under very sanitary conditions. Then they had to unstrap the entire machine, take it into the house, and spend -- I'm not kidding -- about 45 minutes cleaning it. 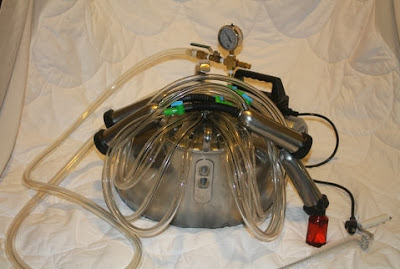 I vowed then and there that I would never have a milking machine. Such devices are obviously necessary for large commercial dairies, but seemed totally useless for a single cow.

...Unless, of course, your physical health does not permit you to milk a cow. And that, sadly, is the situation far too many people face. Lots of folks would love to get a cow or goat and have their own fresh milk, but the repetitive strong hand motions necessary to milk might be painful or impossible due to arthritis or other conditions.

Under these circumstances, the bulky, noisy, and hard-to-clean portable milking machine might be worth it. But sheesh, wouldn't it be nice to have some sort of compromise?

Now fast forward to last April. I was writing a dairy article for Backwoods Home Magazine, and in the interest of covering all possible scenarios, I interviewed a sheep dairyist. It was a fascinating afternoon since, quite honestly, I had never considered the merits of sheep as dairy animals. 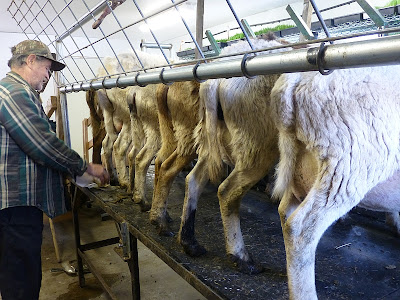 One of the questions that got answered during that afternoon is how -- physically how -- a sheep is milked. The teats are so small that efficiently grasping them must be a trick! (So says a cow milker.) The answer was to use a gizmo called an EZ Milker. 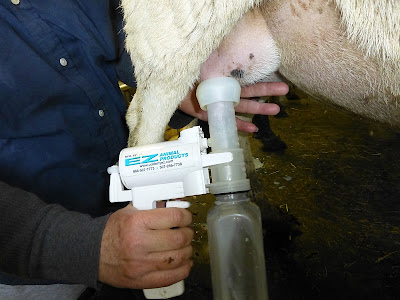 The EZ Milker, it turned out, was the "missing link" between hand milking and a milking machine. It's a hand pump that creates a vacuum that efficiently milks a cow, goat, sheep, horse (yes really), or just about anything else that will stand still long enough for you to grab their udder. Like a milking machine, the EZ Milker keeps the milk very sanitary since it never sees an open bucket.

So anyway, I wrote up the dairy article for Backwoods Home Magazine, and I also put up a blog post on my afternoon with the sheep dairy. Rather to my surprise, the blog post garnered quite a bit of interest among niche-market dairies and got passed around more than I would have thought possible.

Which is how, in July, I received an email from a fellow named Buck Wheeler, the inventor of the EZ Milker. A charming older fellow (whose birthday is today -- Happy Birthday, Buck!), he offered to send me an EZ Milker in exchange for a review. 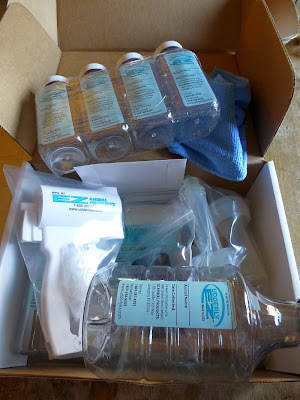 However that was my only complaint about the EZ Milker. I have seldom come across a product that so clearly lives up to its claims. At the time I received the milker, I was milking Polly, our young Jersey. She has nice small teats, and once I figured out how to insert the cup over the teat so the proper suction formed, I gave the pump handle a few squeezes and wow! The milk came right out! 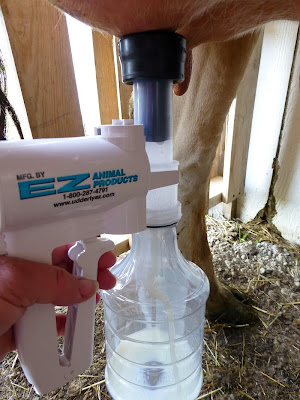 The sensation must be reasonably comfortable for the cow because Polly, despite being a novice milker, didn't have any problems with the EZ Milker. It was a strange for me, though, to get milk without the work. I just sat there and held the bottle and let the suction do the work. Once in awhile I gave a few more squeezes to the pump, and then it was good to go for another couple of minutes. It felt odd to milk a cow without the familiar "zing zing zing" of milk streams hitting the bucket.

I quickly realized how useful this gizmo would be for those whose health won't permit them to actively milk an animal. Hand strength simply isn't required. 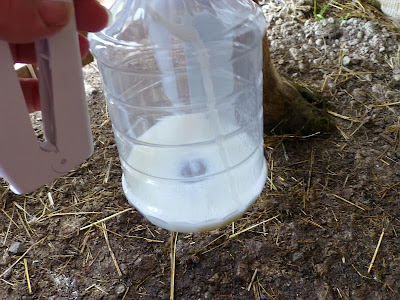 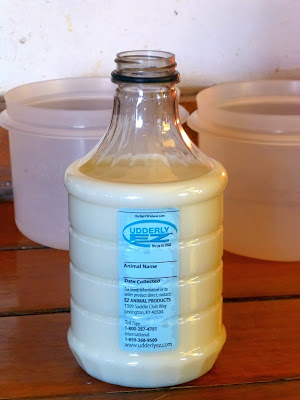 Nor is cleaning a problem. In fact, the milker was an absolute snap to clean. In contrast to the absurd cleaning requirements for the portable milking machine our neighbors had, all I had to do with the EZ Milker was submerge the various components in hot soapy water, slosh them around, and upend them to dry. For obvious reasons, the pump itself is not washed, just the parts that come in direct contact with the milk.

However if you DO get milk into the pump (which you'll know because your hands will get wet with milk), there is a way to safely clean the pump, outlined in detail here. 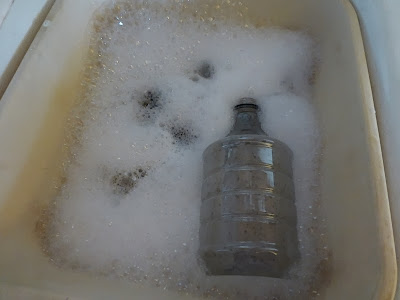 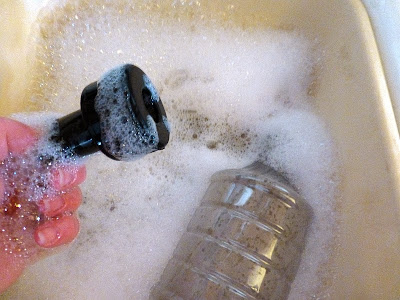 Now since I don't have hand-strength problems when milking cows, I continued to milk Polly by hand as the summer progressed. But then something interesting happened.

My beloved older Jersey, Matilda, gave birth to little Amy in mid-September. Because Matilda's udder is poorly attached, it swells and hangs very low after she gives birth. This time it hung so low that Amy couldn't nurse, necessitating an emergency milking of Matilda's colostrum and bottle-feeding the calf. 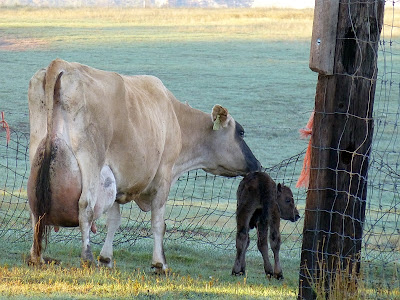 I tried using the EZ Milker to milk out the colostrum, but Matilda's udder hung so low that I couldn't fit the milker underneath it. Buck Wheeler later said, "I wish you would have called me because the pump is set up as vacuum. It will work sideways very effectively. It does not have to be straight down or under the bag, you could milk her laying down."

Now that's what I call a versatile product!

Despite my ignorance on this strategy, I milked enough colostrum to feed the baby... and this time the EZ Milker kit became a literal life-saver. You see, among its many fine accouterments, there are bottles of various size and, most critical, a rubber nipple just the size for a baby to grasp. I used those bottles exclusively for three weeks until Amy "found the faucet" and got the hang of nursing (which also correlated to when Matilda's udder resumed a less-massive size). 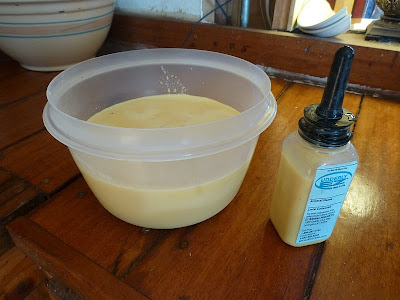 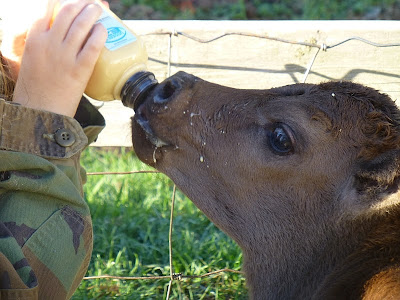 I wish I'd had an EZ Milker when we first got Matilda and were fighting teat scabs as well as a life-threatening case of mastitis. Milking her was a nightmare which gave me a bad case of carpel tunnel that took me months to get over. An EZ Milker would have eliminated that problem.

All in all, I must say this EZ Milker is a phenomenal invention. It opens up the possible of home-grown milk to a whole segment of people whose physical conditions may have previously excluded them from the joys of milking an animal. 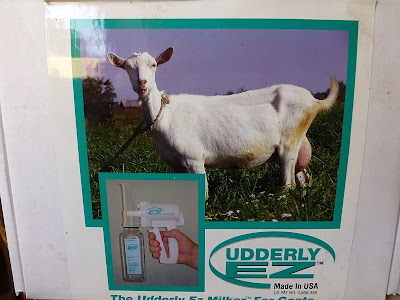 The EZ Milker website has lots of info as well as videos on how to use the product. The link called EZ to Use has lots of additional info (as well as video instructionals) on how to use, clean, and care for the milker. There are different kits available depending on what kind of animal you're milking (i.e. horse, cow, goat, sheep, or even more exotic critters like llamas and reindeer). There are also additional accouterments available (extra bottles, replacement parts, etc.) on the website. And Buck Wheeler is a font of information for anyone with questions.

It's always nice when a product lives up to its claims. In this case, the EZ Milker far exceeds its claims and is, I feel, a valuable tool for any homesteader. It may even allow people to become homesteaders who were unable to milk because of health considerations.

The EZ Milker kit comes in at under $200. While that might seem pricey, the quality and usefulness will easily offset the price. And the customer service for all aspects of the product and its various uses is superb.

If I was a person to give a "star rating" to something, I'd have to give five stars to this baby. Over the years I've had readers express regret that they couldn't get a milk animal because of some sort of physical impediment. Can you imagine the whole new world that might open up for these folks?

All in all, I can highly recommend the EZ Milker.
Posted by Patrice Lewis at 5:21 PM