Along with much of the rest of the nation, we've been locked in a bitter cold snap for the past week. We've "only" gotten down to -2F (I know a lot of folks are in double-digit subzero weather) but last night we also had a brisk north wind that made life pretty miserable. We've been feeding the critters a lot of extra hay, since metabolism is what helps keep them warm. We haven't let the chickens out of the coop in four days.

Yet despite (or because of) the cold temps, the days have been clear and sunny. This afternoon, when the wind died and the temp rose to a (cough) balmy 8F, the girls and I decided to go for a walk. We've been cooped up a lot, and a brisk walk sounded good. 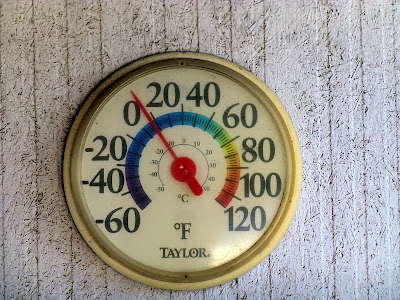 Appropriate dress was in order. 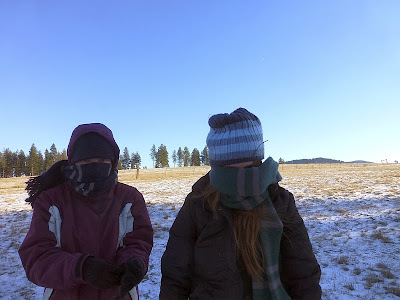 We decided to take the dogs. Well, at least Lydia. Major is an old man and couldn't handle either the distance or the temperature, so before embarking on our venture, Older Daughter walked Major to the end of the driveway, let him sniff around a bit, and then walked him back. It's about as much as he can handle these days. 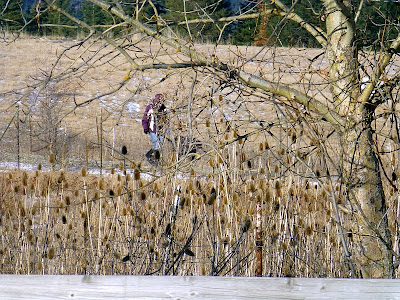 That accomplished, we set off across the frozen fields toward a neighbor's pond to check out the ice. 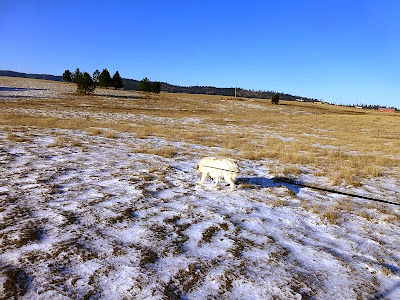 As you can see, we have the barest amount of snow. It's just been too cold to snow lately. 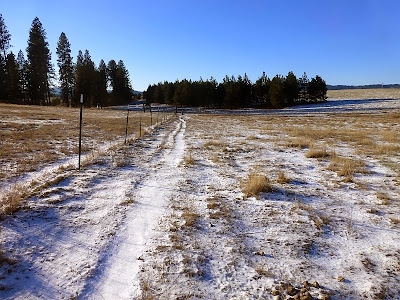 Here's the neighbor's pond, frozen solid. We were curious how thick the ice was. 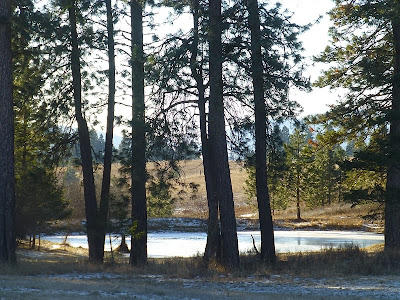 The sun peeked through the trees. 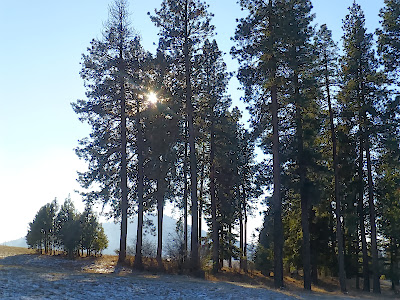 The ice was, indeed, very thick. (Pity we didn't have ice skates.) 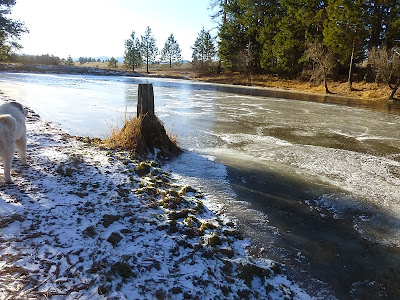 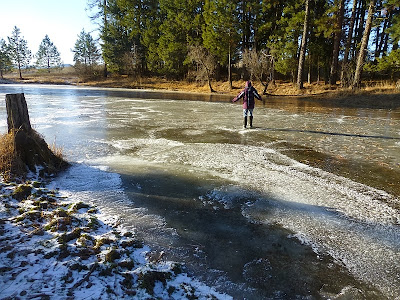 The girls spent a lot of time studying the frozen bubbles, vegetation, cracks, and other phenomenon. We estimated the ice to be about seven inches thick. 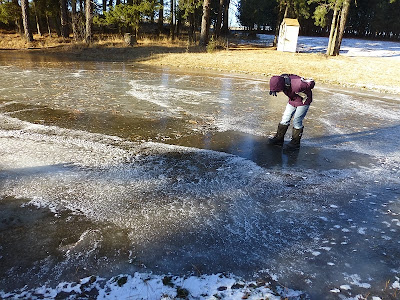 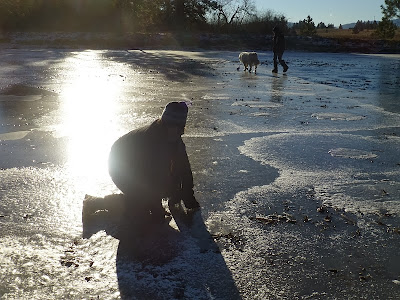 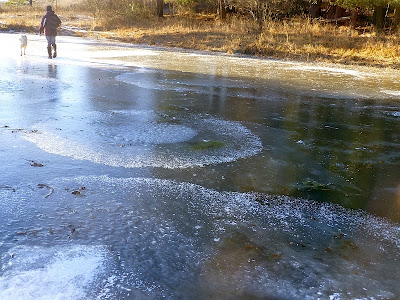 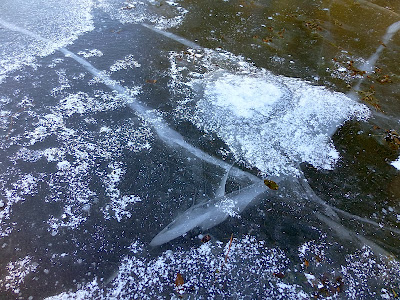 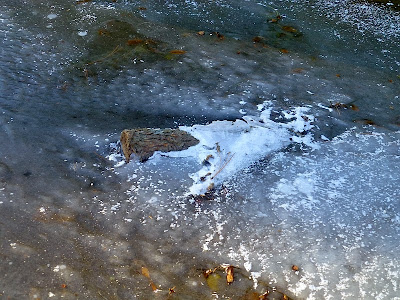 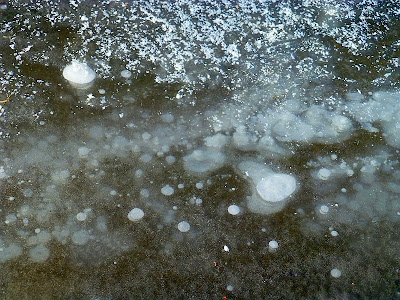 After a little coaxing, Lydia went right out onto the ice. 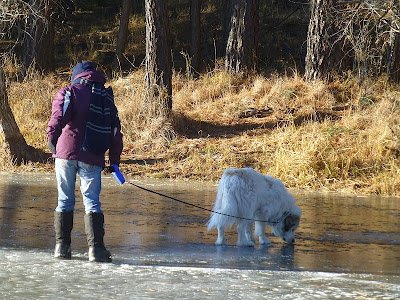 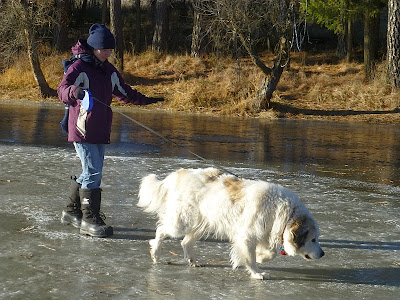 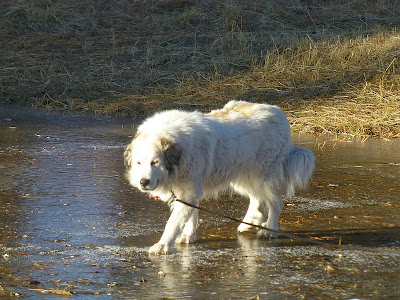 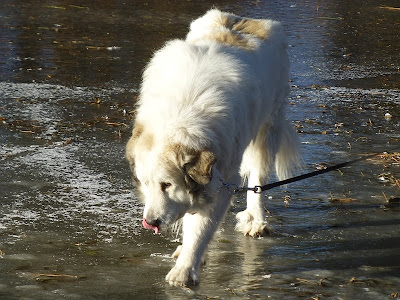 She was having fun, despite the cold! 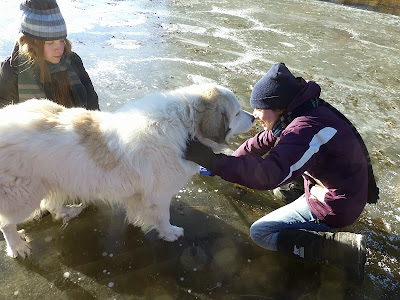 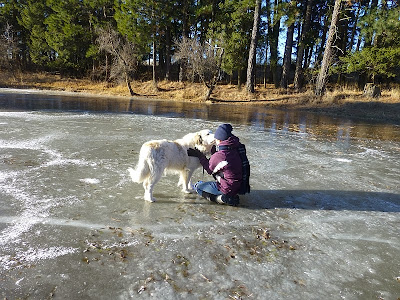 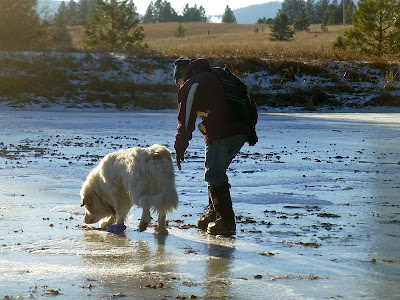 No, Older Daughter didn't fall -- she's examining the bubble pattern under the ice. 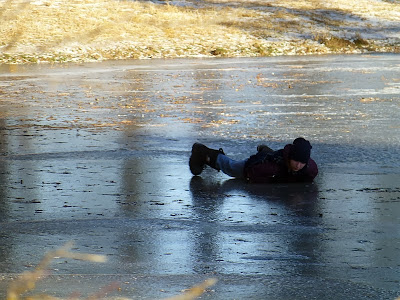 We only lasted about twenty minutes before we had to head home because of the temperature. 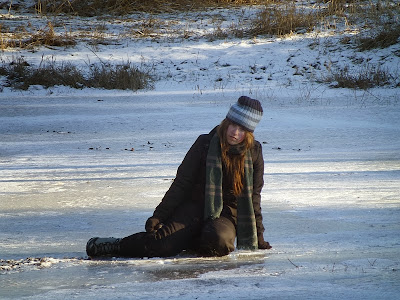 Back at the house, we saw this mixture of quail and turkey prints in the snow. 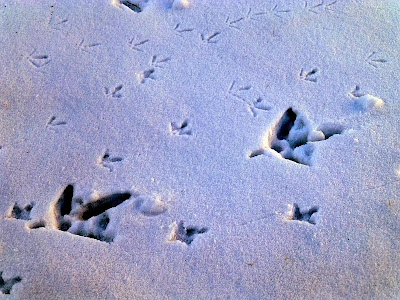 Lydia was pretty tired after her walk. 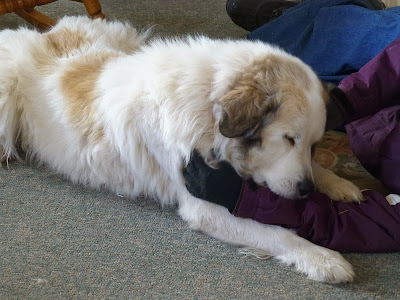 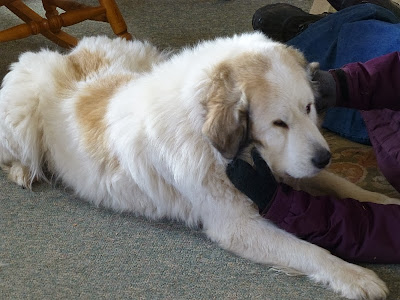 We're supposed to start easing out of this cold snap toward the end of the week. No argument from me!
Posted by Patrice Lewis at 9:03 PM