Of gravel and voles

Time's marching on, and if I want to get my tire garden into plantable condition, I need to keep moving' on it. So today I borrowed our neighbor's tractor and moved some gravel. 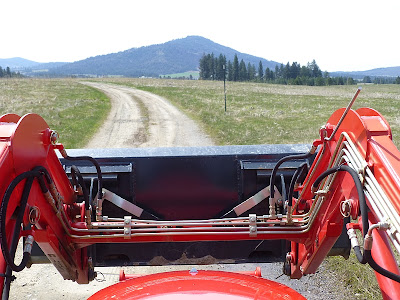 Since getting the gravel delivered a few weeks ago, Don was too ill to do any tractor work (he's usually the heavy equipment operator). But this is an easy-to-use tractor, so I decided to tackle it myself.

I needed to move gravel on top of the vinyl tarps in the garden. The tarps, if you recall, are for weed control. The gravel is to anchor everything down, as well as cover the colorful vinyl. But I quickly discovered that shunting gravel through the rows of tires is more difficult than it looks. Make a note: next time, lay down the tarps and gravel before putting in the tires. (These tires were in place from last year, so we didn't have much choice.)

Don gave me a primer on bucket use. Throttle, levers, speed... I felt like I was 16 again and just learning to drive. My first attempt at scooping and moving gravel was so pathetically lame that Don climbed into the driver's seat and showed me how to do it. It was something he later regretted, as tractor work is NOT compatible with a catheter. 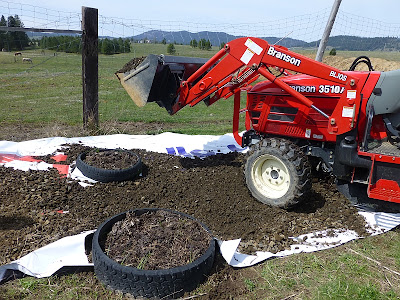 Nonetheless his example set me on my way, and I managed to do all right. However it certainly made me appreciate the skill and artistry with which Don handles the tractor! You should have heard me muttering directions to myself under the rumble of the engine: "Bucket low, throttle up, PUNCH IT, lift bucket, tip back..." Every time. Seemed to help.

Anyway, in theory the girls' job was to spread the gravel as I dumped it. However we rapidly realized this wasn't going to work. The gravel was devilishly heavy, and I could dump far faster than they could rake. So we developed a pattern where I'd dump two or three loads, then hop off the tractor and tackle spreading with the girls. We originally thought we'd spread the gravel about two inches thick; that rapidly changed to spreading the gravel thinner, the goal being to merely cover the colorful vinyl. The gravel is certainly heavy enough that the wind wouldn't whip the vinyl away. 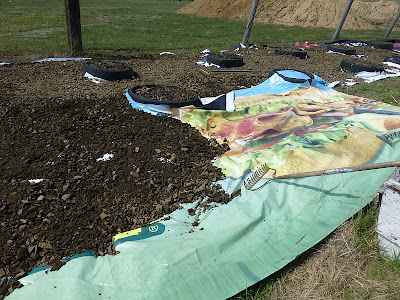 When laying down a new tarp, it was necessary to anchor it so it wouldn't blow away in the wind before I could get travel on it. The girls accomplished this by lying down full length. Hey, whatever works. 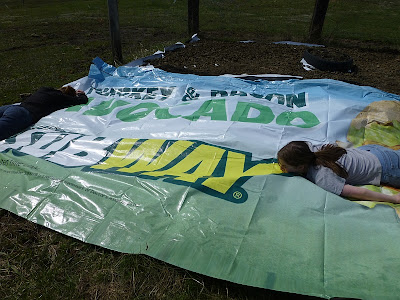 Here's one thing we learned: do NOT lay tarps down before we're ready to put on the gravel. The reason is, voles will set up entire metropolises underneath. We decided to move a tarp that Don and I had laid down a few weeks ago, and low and behold dozens of voles were underneath, tunneling into the compressed grass and the dirt. Here the girls are watching the voles scamper away. 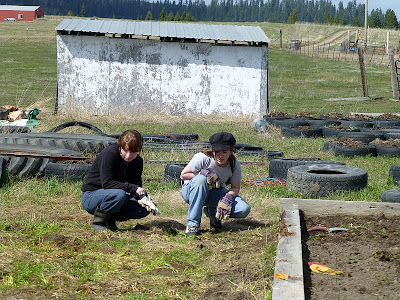 Voles are common in our area and there's not much we can do about them. They're cute, though. 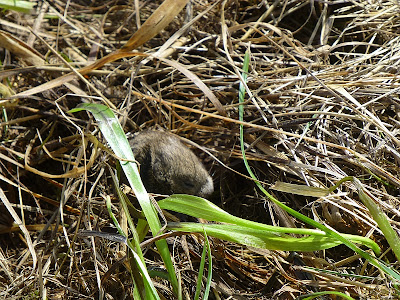 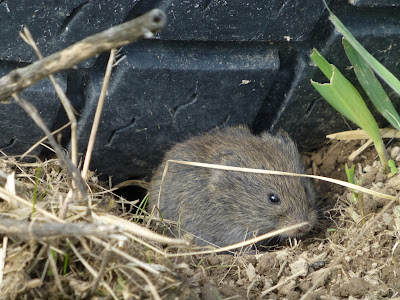 The kids ended up scooping up some babies and moving them elsewhere. It was a good thing they did, because the tractor unfortunately squished a few of the voles that didn't move out of the way fast enough. My compassionate girls were distressed by this, but it was unavoidable. 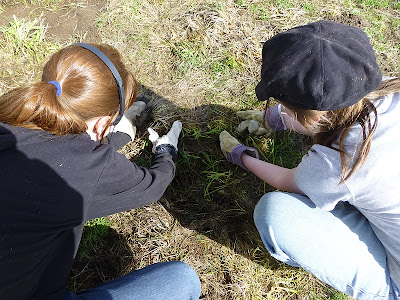 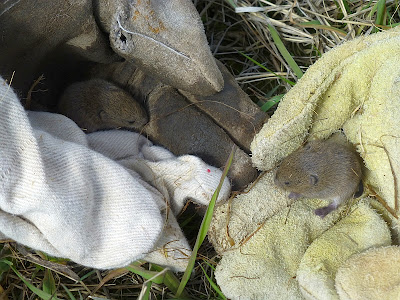 Once we decided merely to shunt the gravel but save the raking for later, the kids had a lot of waiting time between loads. 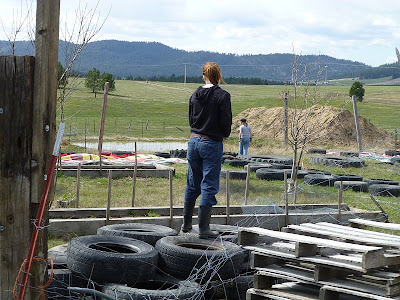 Here the kids are capturing a tarp that went billowing away with a wind gust. I juuuust missed photographing the dramatic moment where it was puffed out like a kite and was ready to go airborne. 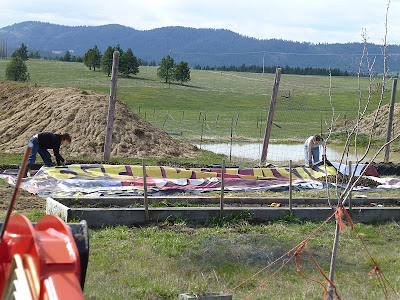 By the end of a couple hours' work, we had a lot of gravel in place, ready to be raked flat... 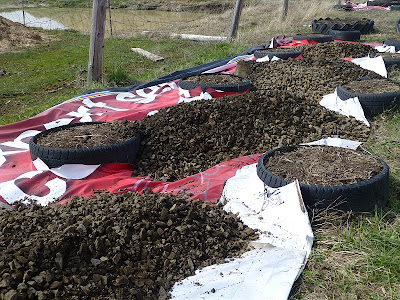 ...and I had made decent inroads on the gravel piles. 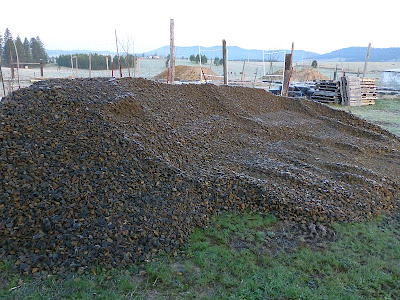 Before finishing for the day, though, we decided to minimize the chances of flattening any more voles by removing some tarps that we'd laid out several weeks ago. We merely lifted them up and pushes them aside. Needless to say, dozens of voles were underneath. 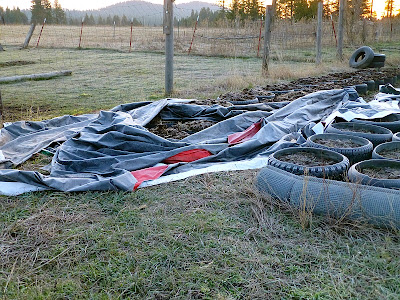 Since it will another couple of days before I can borrow the tractor again to move more gravel, this will give the voles plenty of time to move elsewhere. Trying to control them would be an exercise in futility (except possibly through the widespread use of poison, which I prefer to avoid), so we just have to accept them as an indigenous pest and move on. It does make me glad, however, that I took the precaution of laying down hardware cloth while building the berry beds. Voles (mostly) come in from below rather than above, so the hardware cloth, as expensive as it was, was a good investment.

As for the efficacy of the tarps... well, when we pulled aside the tarps that had been down for a few weeks, even though they weren't anchored by gravel, we could already see a difference in weed control. I'm confident I'll have a LOT less weeds in the garden this year. 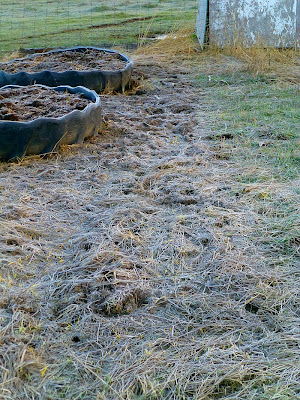