This is Thor (left) and Matilda. Thor is Matilda's two-year-old steer. 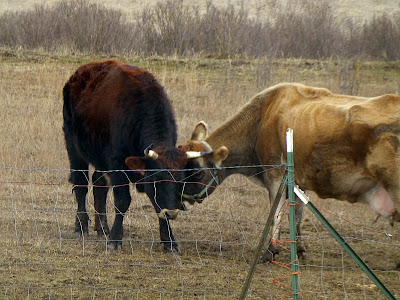 Lately Thor has been getting spring fever. This means he is forever bulldozing over fences in an effort to get to the grass on the other side, which everyone knows is always greener. 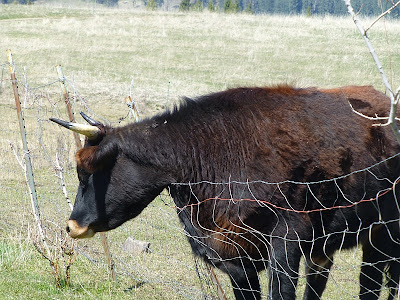 We have patched and patched and patched fences in Thor's wake, but he keeps bulldozing over different spots. He's so durned big, you see -- a lot bigger than our Dexters -- and frankly he's getting on everyone's nerves. In fact he has a date with the freezer next Monday and I, for one, can't wait.

So today when he bulldozed down yet another spot on the fence, we'd had it. Don is not yet up to chasing down a snarky teenage bovine determined to tick us off, so we knew we had to do something different.

So we decided to chase everyone down into the pasture. It's a month sooner than we want -- the pasture grass hasn't grown up much yet -- and putting the cows on it too soon would stunt the grass even further. But it was either that or babysit Thor until next Monday.

So... we called all the beasties, opened a gate, and got out of the way. Most of the animals know exactly where to go.

Brit was the first to dash through. 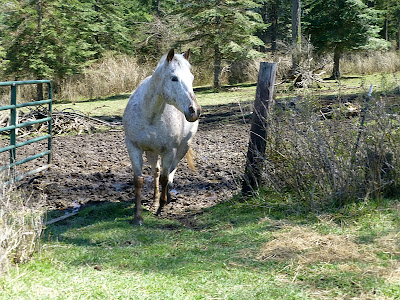 In twos or threes, the animals made a dash around the barn toward the pasture gate. 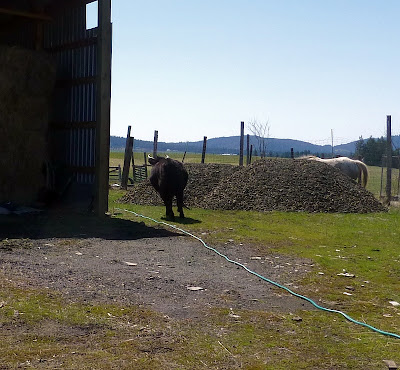 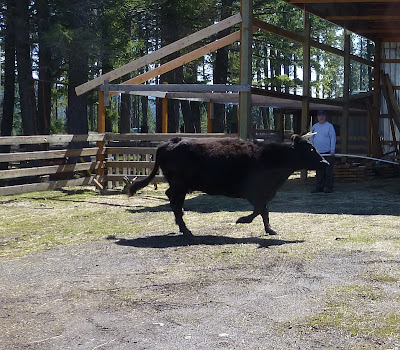 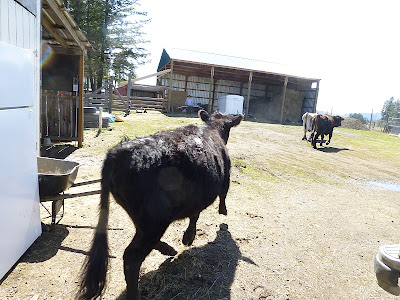 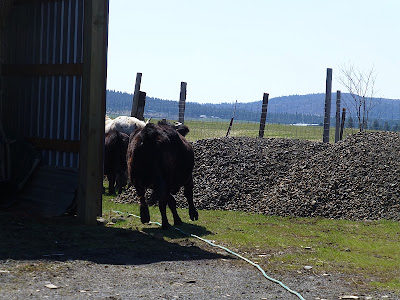 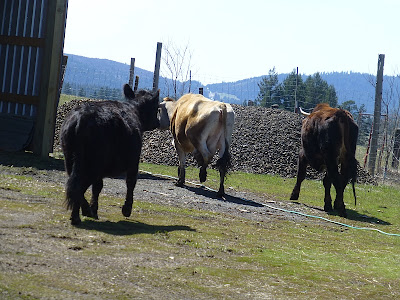 In short order, everyone was grazing hungrily in the pasture... except Atlas. He's young and not as familiar with the spring and fall routines on the farm, so he got confused and didn't make it through the gate. 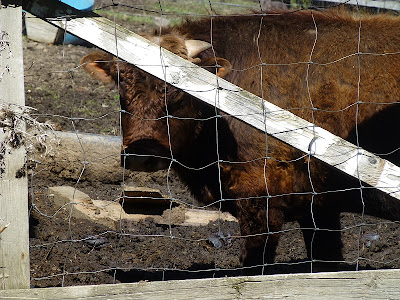 Took him about an hour to find his way out and join the others. 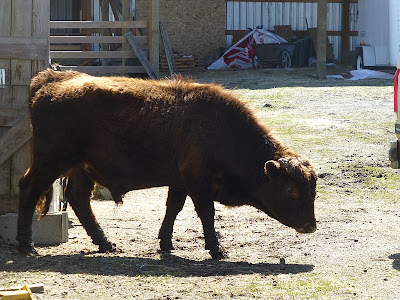 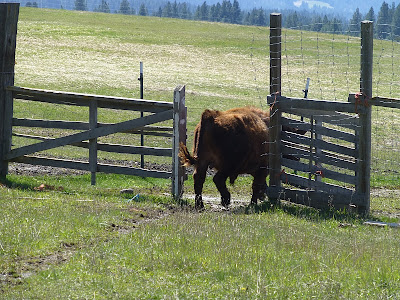 Atlas is a surplus bull and also has a date with the freezer next Monday. Time to cull our herd a bit.

After the chaos of the morning, the cows settled into a contented afternoon. We're not going to keep them on this pasture for long -- probably just until Thor and Atlas get dispatched -- but for the time being, peace reigns once again. 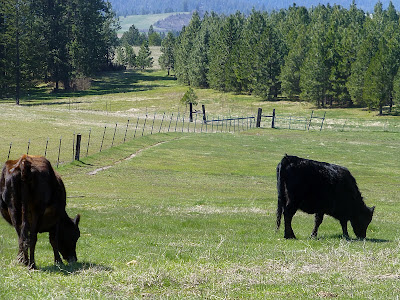 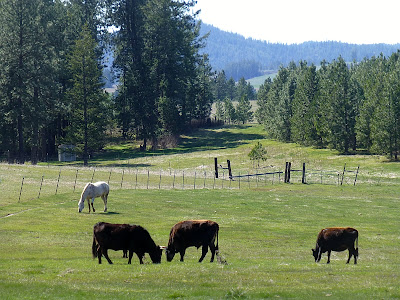 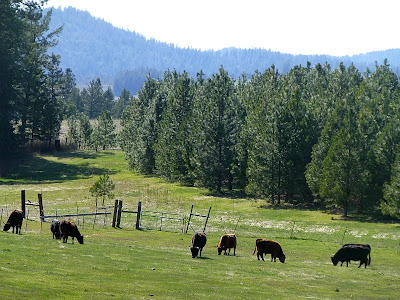 Atlas was delighted with the pasture and kicked up his heels all afternoon. 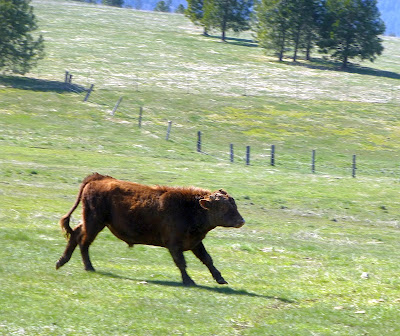 Atlas and Thor are good buddies and spend a lot of time wrestling. Boys will be boys, after all. 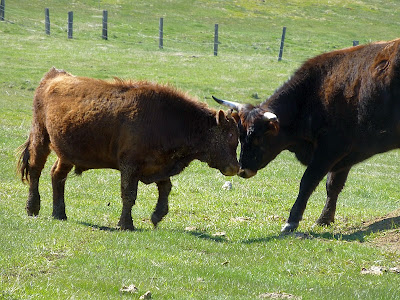 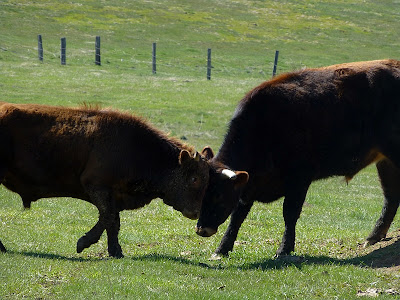 Just one more thing to do, which was to bring the water tank into the pasture. 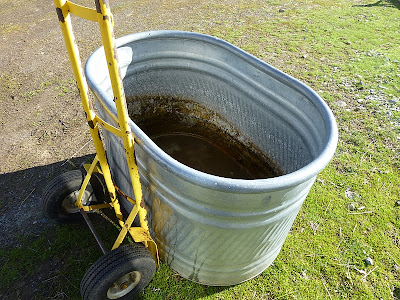 But first it needed a good scrubbing... 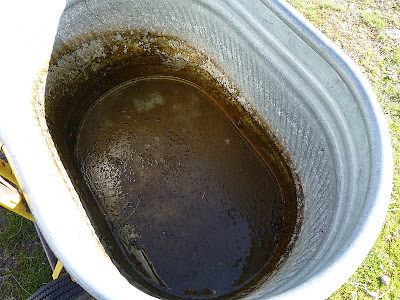 ...with the help of a brush and some elbow grease. 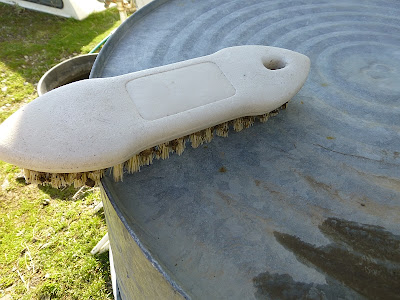 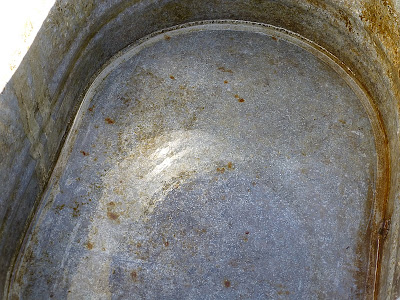 We'll probably keep the beasties down in the pasture until Thor and Atlas are dispatched, then shoo everyone back into the woods for a month so the pasture can grow up lush and green. 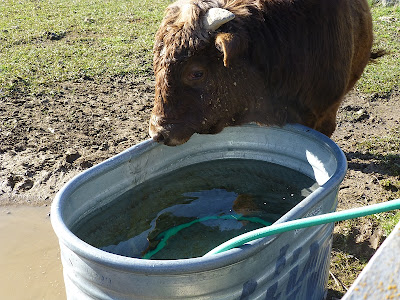 But for the moment it's nice not to have to put up with Thor's snarky shenanigans. 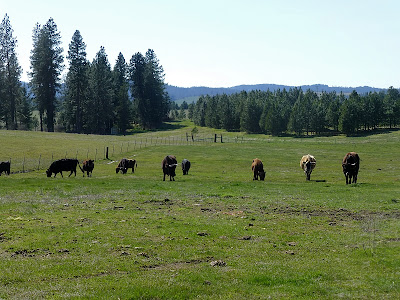 Posted by Patrice Lewis at 8:44 PM