Younger Daughter and I are still diligently working on our Great American Novels through NaNoWriMo (National Novel Writing Month).

In fact, Younger Daughter has been whompin' my fanny when it comes to word count. She's putting in hours every day, balancing my old laptop on her lap and pounding the keyboard. I long ago gave her the gift of privacy when it comes to her writing, so I don't know how her book is developing; but I do know that the only way she (or anyone else) can improve their writing is to write. Copiously. So more power to her.

Unlike me, Younger Daughter has been following the regional NaNoWriMo forums for our area, and she learned they were hosting "write-ins" twice a week, either in the Coeur d'Alene library or in a place called Calypso's Coffee Company. Despite the distance, she had her heart set on attending one of the write-ins.

So on Thursday, with the excuse of having the girls stay with their grandparents one last time (before my folks return to California for the winter), we drove into Cd'A. I dropped Older Daughter off with my folks, and then Younger Daughter and I went the short distance to Calypso's, a place I'd never been before. Beyond the pretty sign, it sure doesn't look like much on the outside -- just a plain cinderblock building. 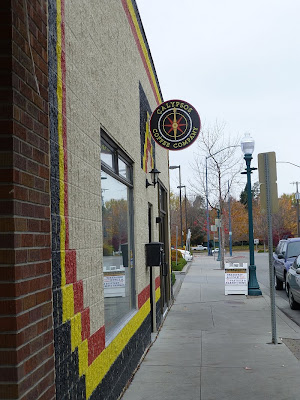 But on the inside -- oh my! The place is huge, casual, comfortable, and delightful. (Sorry for the blurry photo, I didn't want to be too obvious as I snapped this shot.) 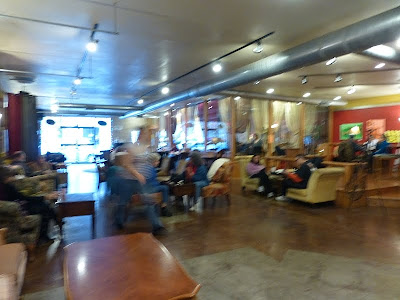 I was amused by this sign on the wall. 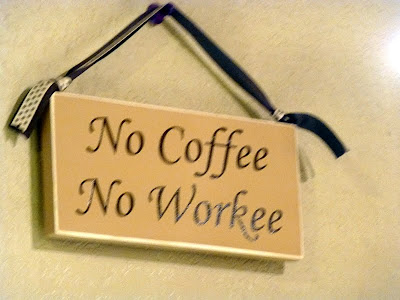 The coffee house had a glassed-off conference room in which the NaNoWriMo writers gathered. It also had a few individual corrals with electrical outlets, so Younger Daughter set herself up in one of those. 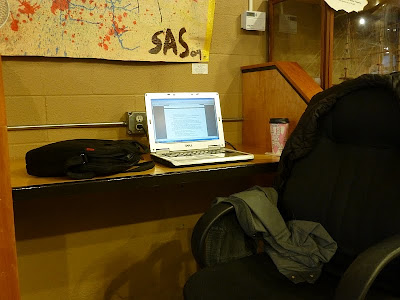 I parked myself at the conference table since I had my AlphaSmart, which is battery-powered.

I treated Younger Daughter (and myself) to a chai tea latte (an enormous treat -- on our budget, purchasing hot drinks is nearly unheard-of) and we joined the other writers.

Well, we had a fine time. A wonderful time. There is something truly invigorating about being in the presence of other writers. We laughed and typed and asked each other questions ("I need a name for a doctor! Any ideas?") and got a tremendous amount of work done.

I asked permission to photograph the group. Twelve people eventually showed up. (My chair is the empty one in the front-right.) 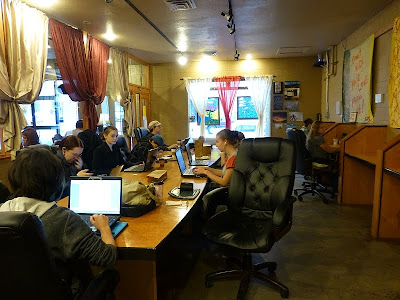 Younger Daughter hit a milestone while we were there -- 25,000 words, the halfway mark! She got a warm round of applause from the group, and an invitation to take a prize from a grab-bag (she chose some fuzzy gloves in shocking pink -- I'll post a photo later).

Someone took the trouble of typing up a bunch of "words of the day" from Dictionary.com and putting them in a paper bag. The idea is that if we got stuck in our writing, we could reach in and randomly draw a word, which we could then incorporate into our manuscripts. (Harder than it sounds -- not too many opportunities arise in a manuscript to use words like "abderian" or "exuviate" or "cantrip" -- but a fun idea.) 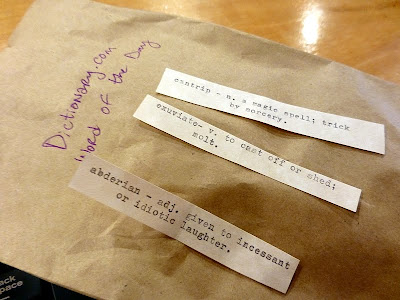 I wish we were closer to these write-ins, but alas we're not. My folks are returning to California next week, and with them goes the frequency of our trips to Coeur d'Alene. That's why I'm so glad Younger Daughter and I had the opportunity to attend at least one.

Now if you'll excuse me, I need to catch up on my word count for the day.
Posted by Patrice Lewis at 5:55 PM