The sound you hear is the sound of keyboards clattering all over the planet as hundreds of thousands of people launch themselves into their version of The Great American Novel.

NaNoWriMo is this hare-brained scheme of writing a 50,000 word novel in one month (which amounts to 1667 words per day). The idea is not to let trivial issues like plot, character development, or talent slow you down -- you just write. And write and write. Let plot and character development and even talent take care of themselves.

As any writer knows, the best way to learn to write is to actually write. A surprising number of aspiring writers don't understand this. You can take endless classes and read endless books on the subject, but the best way to hone one's writing skills just to pound the keyboard and keep pounding that keyboard until you start learning what works and what doesn't.

The advantage of participating in NaNoWriMo is it encourages all participants to leave their nasty and overly-critical "inner editor" locked away in a box so it can't disturb the free-flow of words that come from our fingertips.

It's a crazy concept, but rather surprisingly it works. I've done NaNoWriMo a few times, including last year. Also last year, to my surprise, I learned that Younger Daughter was shadowing me and doing her own writing project (though not officially signed up with NaNoWriMo). By the end of the month, she'd written 30,000 words -- and she was ashamed that she hadn't made it to 50,000! But how many thirteen-year-olds, I asked her, have ever written anywhere near 30,000 words, much less in one month?

Nonetheless she wanted to prove herself, so earlier this year she did her own private NaNoWriMo and completed 50,000 words in thirty days. Wow.

NaNoWriMo has a Young Writer's Program available, in which young people under age 17 can set their own word-count goals. But Younger Daughter didn't want to participate in this -- instead, she registered as an adult this year and is challenging herself to write the full 50,000 words. More power to her! 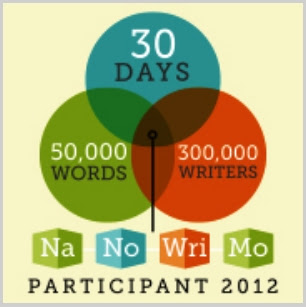 NoNoWriMo takes place in November to "take advantage of the miserable weather." (I might point out that when it was created, the founder was a single guy who never had to plan or cook Thanksgiving dinner, much less homeschool, batten down a farm for winter, or take care of kids. But I digress.)

So this morning Younger Daughter and I made sure we got our word count in. We'll see how our novels unfold and progress throughout the coming months. 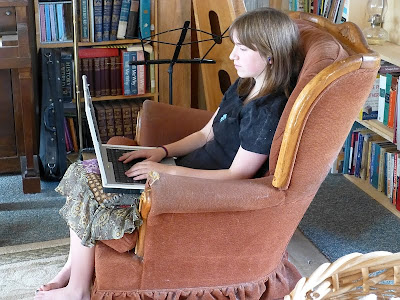 Who else is participating?
Posted by Patrice Lewis at 12:42 PM