If there's one thing I love to grow in the garden each year, it's garlic. 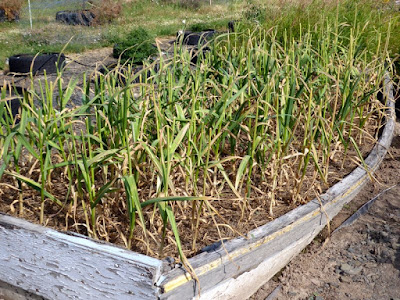 Year after year, this beautiful allium produces a dependable crop of huge cloves. 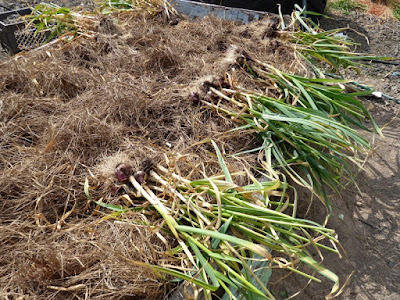 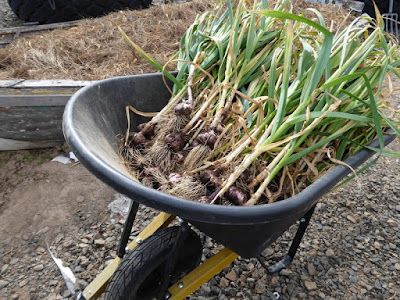 After harvesting, I work in the shade of the barn where I trim off all the stems. I grow a German porcelain-neck garlic. Rather than those annoying cloves that get smaller and smaller toward the center, this kind of garlic has large (and sometimes huge) cloves around a central stiff (or "porcelain") stem. It's got a nice bite to it, just as garlic should. 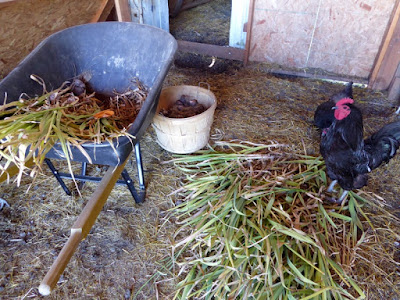 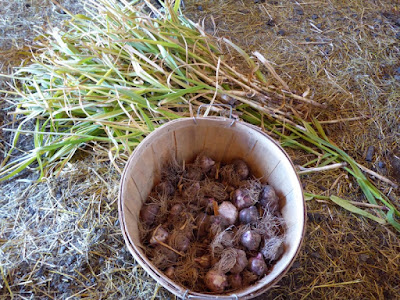 A friend wanted to grow some of her own, so I passed on several heads for planting. 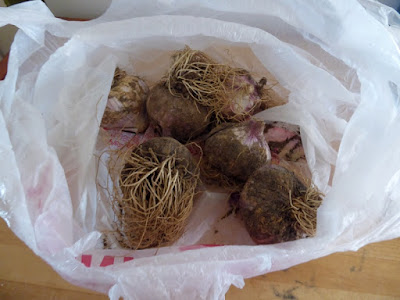 After pulling garlic, it needs to dry out for a few days. I laid the garlic out on cardboard on some wire shelves we have in the house. 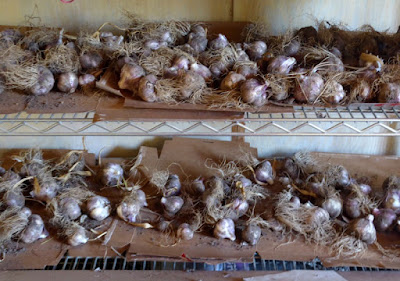 Over time, I peeled the garlic. It's kind of a laborious task, but for some reason I don't mind it. I do a bit at a time and rather enjoy pulling shining creamy-white garlic cloves from the dirty skins. 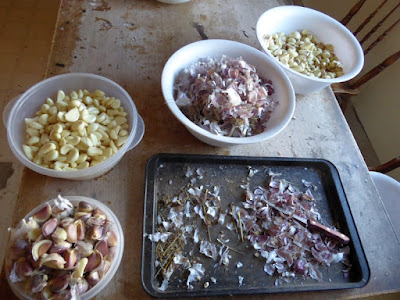 I kept back 150 of the largest cloves for planting, and on October 29, I went out to plant them in the garlic boat. Mr. Darcy was a huge help. 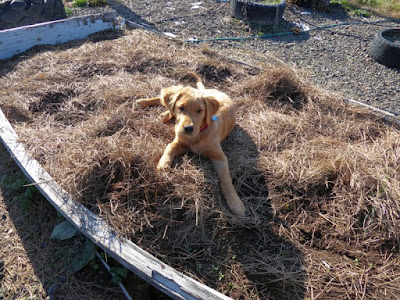 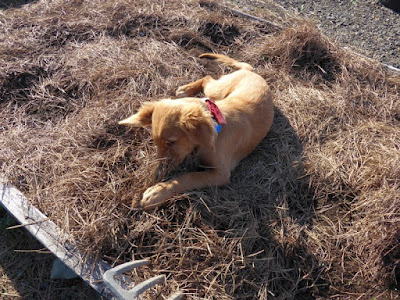 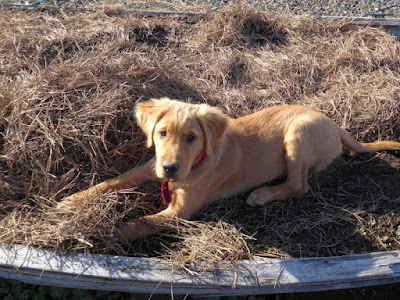 So huge, in fact, that I had to put him back in the house until I was finished. There's only so much help I can take, doncha know.

I started by scraping back the pine needle mulch, thinking I could plant half the bed at a time. 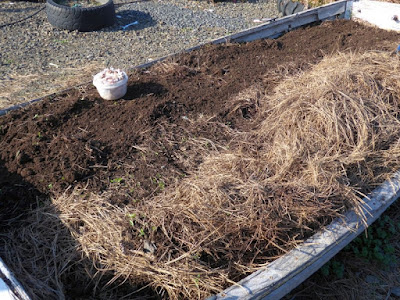 But since I like to lay the whole bed out before planting, I ended up removing all the mulch for the moment. 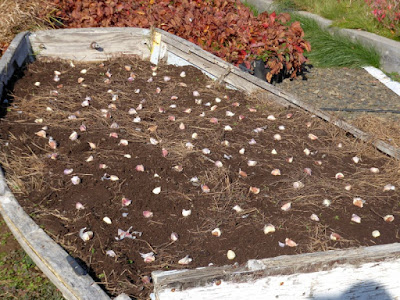 Planting takes no time at all. Shove a trowel into the dirt, angle it out to create a space, drop in the clove (root side down), remove the trowel, and it's on to the next clove. 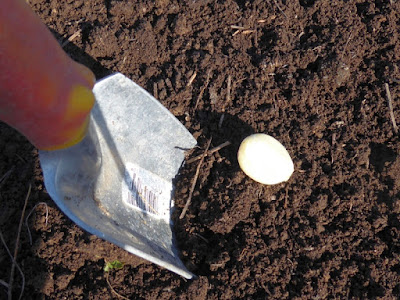 Then I recovered the bed with pine needle mulch, and that's it for garlic in the garden until next summer. 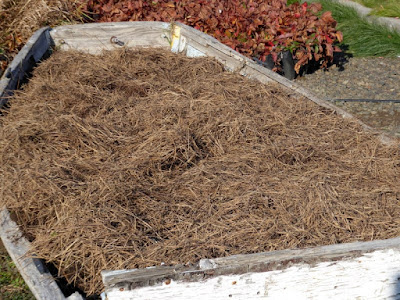 But I still had to preserve the garlic. I usually can my garlic, since we don't have a basement or root cellar for long-term storage of cloves. This year's harvest was kinda light, about 7.5 lbs altogether. 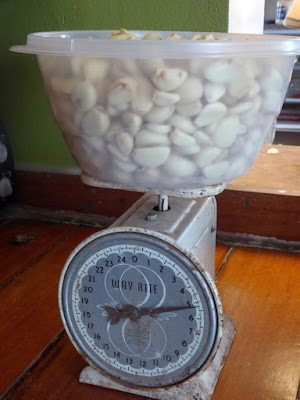 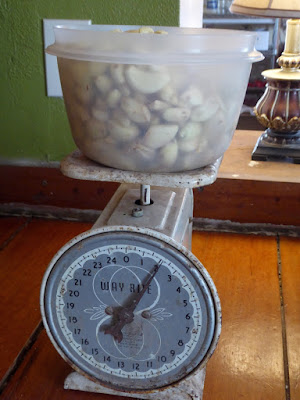 To can it, I start by chopping it up using a food processor. 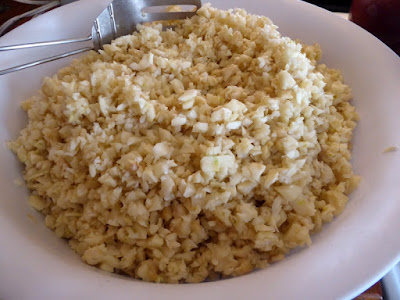 Then I parboil it by heating water to boiling, turning off the heat, then adding the chopped garlic and letting it sit for about ten minutes. 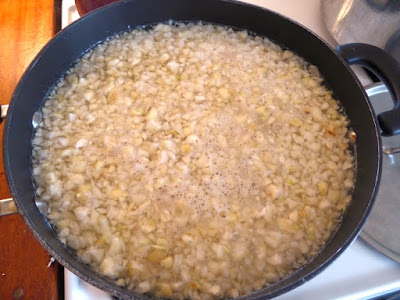 Then I drain the pot, reserving the cook water. 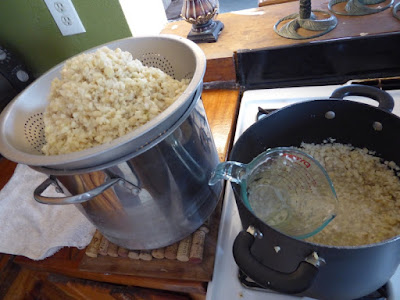 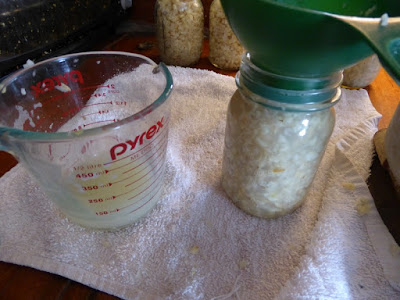 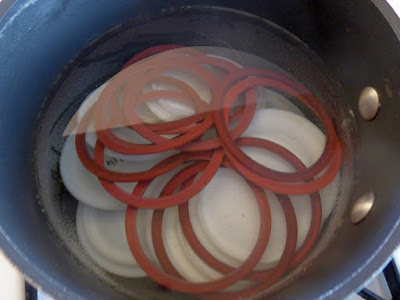 I ended up with twelve pints. Garlic is low-acid, of course, so I used the pressure canner. 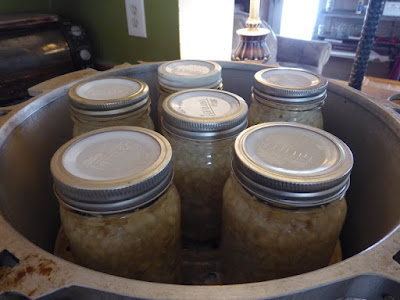 Adjusted for our elevation, I held it at 12 lbs. pressure for 25 minutes. 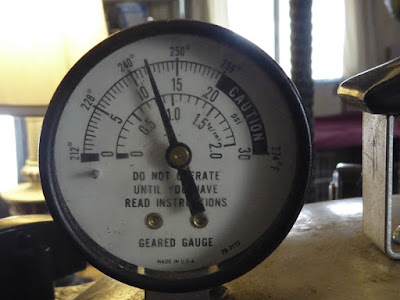 During the course of canning it, I heard a loud "PANG" from inside the canner. "Lost a jar," I remarked to Don. Sure enough, after things had cooled down and I removed the canner lid, I had a jar which broke out its bottom. I didn't dare keep the garlic from the jar since I didn't want to risk ground glass. Eh, this stuff happens. 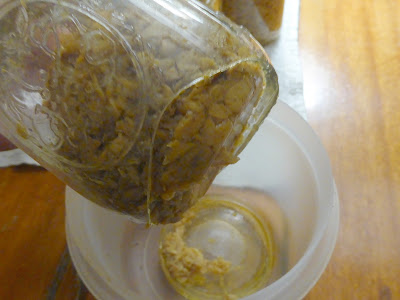 And meanwhile I had 11 other jars of beautifully preserved garlic to last us over the next year. 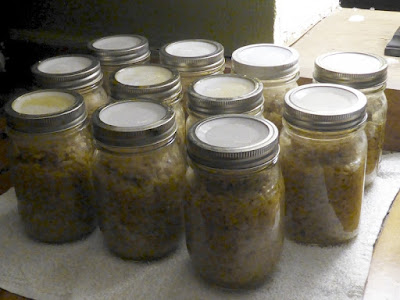