Some of you have been asking for an update on Younger Daughter.

Our dear daughter, if you remember, is now in Navy boot camp in Great Lakes, Illinois. She was able to make her one phone call upon arrival to let us know she'd arrived safely and to let us know she would be shipping her personal effects home. She would also be permitted a phone call in a couple of weeks. 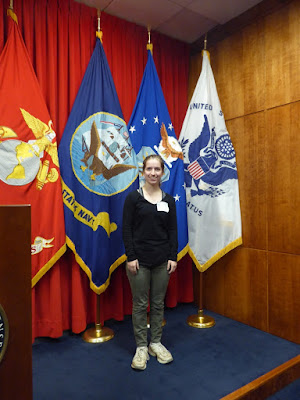 After a bit we got her mailing address, and we all (meaning, friends and relatives) have been blitzing her with mail, to her great delight.

Bottom line, she's doing fine. Really fine, in fact. During her brief (ten minutes) phone call a few weeks ago, she said things were sometimes crazy in the barracks with 90 women sharing eight shower heads, but she actually likes her RDCs (Recruit Division Commanders) despite the obligatory yelling; and though there is an expected amount of angst and drama among the women in the barracks, on the whole she gets along with everyone. (She's good at not getting involved in angst and drama.)

And on her first written exam, she scored 90 percent.

Then out of the blue last week, she called. Yes, called -- when such a call was NOT expected. "Hi Mom," she said. "Long story short, I'm in the hospital with double-pneumonia."

Turns out conditions in boot camp are rather dirty, despite the general tidiness. Plus, of course, she's "racking" with 90 other women from all over the country. Early one morning on her fourth night of "mid watch" (midnight to 4 a.m. watch duty), an RDC looked at her sharply -- she was swaying -- and asked if she was okay. She snapped to attention and replied she was fine.

But the RDC departed, learned this was her fourth all-nighter in a row, realized she looked like death warmed over, and told her to leave her post. Later that morning she was transported to the hospital. (I have a sneaking suspicion she may have impressed the RDC because she refused to complain and was willing to do her duty despite being tired and sick.)

Once I got over the shock of her being in the hospital, it turns out she was actually feeling pretty well, considering an IV was pumping antibiotics into her and she had to stop to cough and gasp every so often. But she felt like she was in a luxurious resort: her own bathroom and shower, room service, and visits from the RDCs with smiles rather than the obligatory yelling.

And she was able to call people! In fact, I think she spent four days solid on the phone. She called us twice a day, she called her grandparents, she called friends. It was hilarious.

She expected to return to her division on Saturday (that was Oct. 28), and from the abrupt phone silence we expect that's exactly what happened. She felt confident she would be able to keep up with her Division despite the time in bed, rather than getting set back and having to complete boot camp with another division (she expressed great fondness for her group).

So that's the scoop so far on Younger Daughter. She's a trooper, I tell ya.
Posted by Patrice Lewis at 6:56 PM