A couple weeks ago, I did a long-overdue cleanup of our washroom, which tends to become a catch-all for a variety of stuff. It's not a large room, and some of the crowded floor space is taken up by two very important things: 50-gallon barrels of water.

We've kept these barrels in the washroom ever since the November 2015 windstorm devastated our region. We've dipped into those barrels more than once, notably last June when our well pump died and we had no water for a couple of days.

But it's important to freshen stored water once in a while, so I emptied the barrels (the water was crystal clear), rinsed them, then refilled. To each barrel I added five teaspoons of fresh bleach before tightening the lids. The combination of darkness and bleach keeps the water fresh and pure. 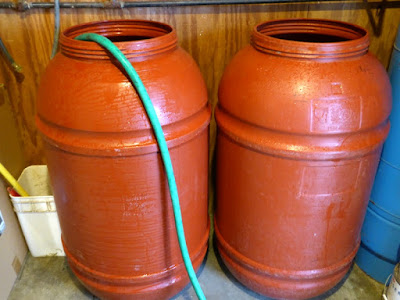 I told Don afterward that having those barrels filled with fresh water gives me a nice fuzzy comfortable feeling.

I have a cyber-friend in Maine who just experienced something similar to our 2015 windstorm. Thankfully this friend is a prepper.

She wrote: "We had most of the state without power for about a week. The windstorm last Monday caused quite a mess. It's amazing how unprepared my coworkers were for this. The power died last Monday morning and the general thoughts were, 'It's in the 60s so no problem with no electric heat.' No one thought about what was going to happen when it dropped into the 30s that night. We have a generator, which I am grateful for. It wasn’t cool enough to throw the freezer and fridge stuff outside during the day as it was in the 40s and 50s. No one appears to have learned their lessons either. You can't fix stupid." 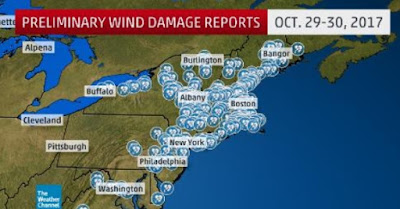 My friend added these staggering words: "I can't believe how some folks really have their heads in the sand. Our generator cost a lot but it's worth every penny. I have a coworker who said she would rather buy new clothes, furniture, etc. than a generator because a storm like that is likely not to happen for another 100 years!"

The lesson to be learned here is this: Don't bother preparing for a zombie apocalypse. That's science fiction, folks. It's best to prepare for what you're most likely to face, including natural disasters specific to your region.

I'm glad my cyber-friend is a prepper.
Posted by Patrice Lewis at 6:09 AM