My hometown (Napa, California) is in flames. 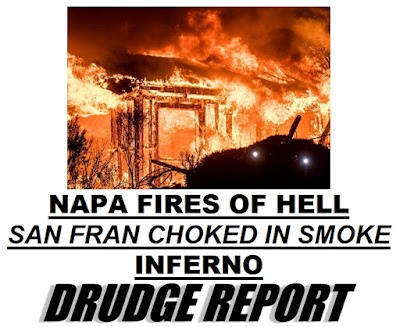 The sheer quantity of fires which sprang up overnight and roared into infernos before winds of 35 to 50 mph makes me think arson is the cause, though that's just speculation on my part and has not been confirmed. But whatever the source, fires through Napa and Sonoma Counties are clocking a tragic toll of burned homes, businesses, and wineries.

It's hard to follow what's going on from this distance, but familiar place-names are leaping out at me from every news article. My parents moved outside Napa in 1972 when I was 10 years old, and I grew up in a semi-rural area a couple miles up Monticello Road on the east side of the valley. I believe parts of Monticello have been evacuated, but I don't know the status of my childhood home. (My parents retired and moved elsewhere several years ago.)

It breaks my heart to think of Wild Horse Valley Ranch at one end of the region (where I took horseback riding lessons as a kid) to Stornetta's Dairy at the other end (where every schoolchild took multiple tours) being burned -- not just because of the structures and livelihoods, which are bad enough; but because of all the animals (horses, cows, etc.) unable to be evacuated. 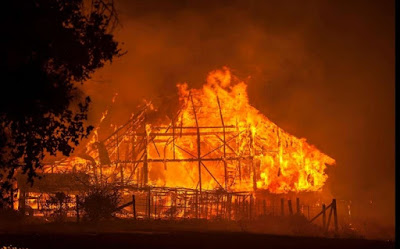 This article noted, "For long time Napa Valley residents the massive fire rekindled memories of the 1981 Atlas Peak wildfire. In that blaze, 23,000 acres were burned, $36 million was done in damage, 65 structures were destroyed and 11 people were injured."

I remember the Atlas Peak Fire eerily well since it nearly burned us out. It was terrifying.

Please pray for the hardworking emergency personnel and firefighters, as well as those displaced or burned out.

If there are any blog readers in the area, please check in to let us know you're safe and to give us news.
Posted by Patrice Lewis at 11:12 AM

Email ThisBlogThis!Share to TwitterShare to FacebookShare to Pinterest
Labels: fire