Here in North Idaho, winter is never far from anyone's minds, no matter how hot it is (and right now we're gasping in the low to mid-90s). Yesterday we took the first step toward winter preps by getting our hay in.

We have a neighbor who always keeps an eye out for a good deal on hay. This year he found some bluegrass for a very affordable price, so we ordered 15 tons. The driver was able to fit 24 bales (12 tons) on the truck at a time, and we'll pick up the remaining three tons ourselves.

So all day Thursday we cleared the landing in front of the barn, and cleaned up the barn as well to make room. At 9 am precisely yesterday morning, the truck rumbled up with our hay. 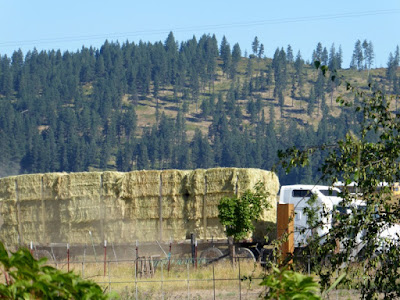 It only took the driver about a 12-point turn to get his rig turned around in the landing with the back facing the barn. Okay, maybe it was a 16-point turn. 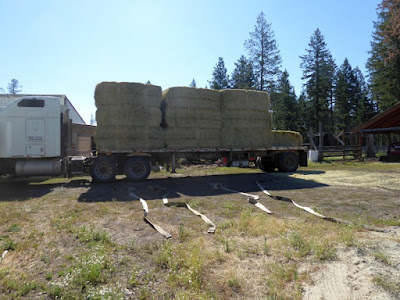 Don had borrowed a neighbor's tractor with a lot more oomph than ours -- it's capable of lifting 1000-lb. bales easily, plus it has tines -- and he handled it like a pro. Since we're only getting 15 tons this year (as opposed to last year's 30 tons), he only stacked them three high, instead of four high. We still have two tons left over from last winter, plus we're butchering three more animals this fall, so we'll only go into winter with six cows to feed (and a horse). (In case you're wondering, the animals we'll keep are Matilda and her yearling steer calf Sean, Amy and her yearling steer calf Armour, and Polly with her yearling heifer calf Pixie). 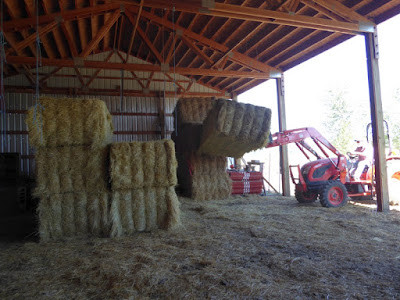 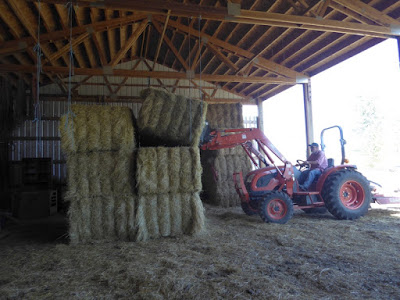 While Don was stacking hay, I checked on a hen I knew was setting in a corner by the older hay bales, and made an interesting discovery. Two hens are setting on the same nest. What, ladies, there isn't enough room around here for separate nests? 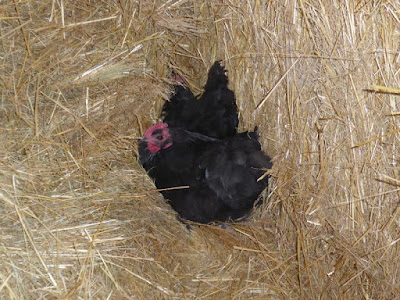 I tell ya, I've never seen a breed more likely to go broody than these Jersey Giants. I have no idea how many eggs are under them, nor do I have any clue how they'll sort out whatever chicks hatch, but I figure that's their business.

After unloading the first six bales, Don learned the easiest thing to do was get on the other side of the truck and shove the bales down. 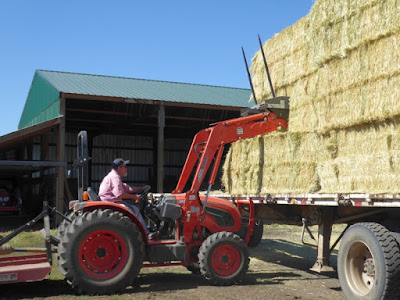 Here's what it looked like from the other side: 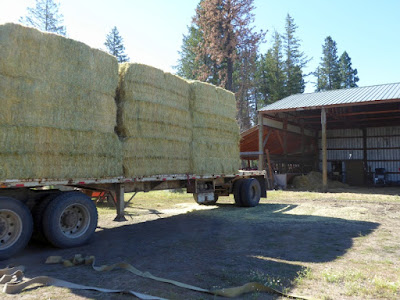 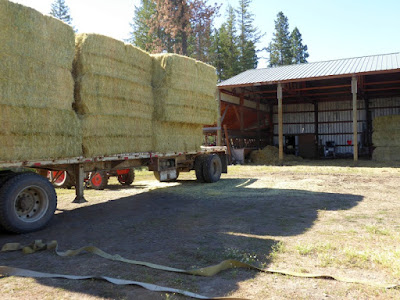 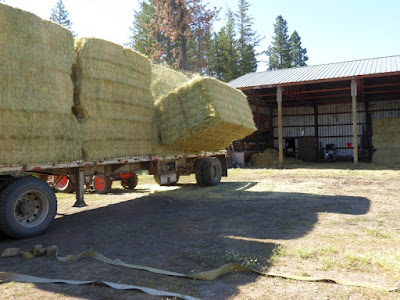 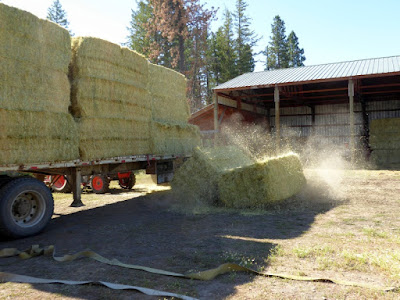 It's a pretty impressive whomp when thousand-pound bales hit the ground, let me tell you. 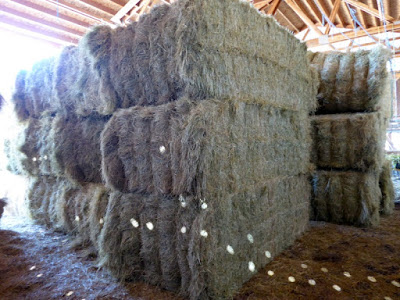 You'll notice there's a lot of room behind the bales in the barn. There's a reason for this. We had a bull calf who -- ahem -- came "online" sooner than anticipated, so it seems all the girls are bred and will calve sometime in late January or February. That's a really really lousy time to have babies. However we'll only have a maximum of four calves born, so we'll shuffle everyone into the barn or outside pens to keep them protected from the weather. Matilda and Amy can bunk together (they are mother and daughter) in the pens by the corral, and Polly and Pixie can bunk together here behind the hay bales, where they'll be sheltered from wind and snow. Ah, logistics.

This summer milestone -- getting the hay in -- is one of those "Whew!" feelings of security, knowing we can feed our animals through the winter.
Posted by Patrice Lewis at 4:59 AM