Out of the blue, you'll notice the sidebar photos and ads on my blog are now gone. Instead, we see an ominous sign: 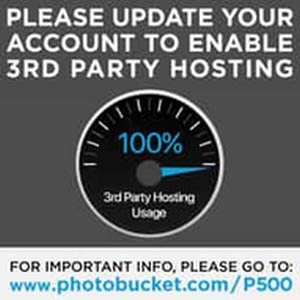 In the past, I believe we paid something like $9.99/year -- that's ten bucks per year -- to Photobucket (an image storage site) to maintain and store the photos used on this blog. But hey, maybe we missed an overdue notice and we owed them their $9.99....?

So Don hopped over to Photobucket and learned it would now cost us $399 per year -- that's FOUR HUNDRED BUCKS PER YEAR -- to store photos.

The amazing thing is this came literally out of the blue. All over the internet, people are furious that their photos have suddenly disappeared and are being held hostage by a company that now demands -- with no prior warning whatever -- a ransom of $400 to restore the photos.


Embedding images on a website or in a forum post is a very common practice, with those images usually living on one of the many well-known image hosting websites. One such host is Photobucket, but a recent change to its subscription tiers means many millions of images across the Internet are no longer going to load outside of Photobucket's own site.

The key feature of a Photobucket account we're talking about here is called "3rd Party Hosting." It allows you to embed images from Photobucket in another location on the Internet, e.g. in a forum post or on a website.

As Norvic Philatelics discovered, Photobucket changed its terms and conditions and removed the 3rd Party Hosting feature from the lower subscription tiers. If you want to continue using that feature then a Photobucket Plus 500 subscription is required. It costs $39.99 per month or $399 per year.

The worst part of this debacle, according to Ghacks.net, is the fact Photobucket users were apparently given no warning of the change. The subscription features simply changed, and images stopped loading without explanation.

I don't have the slightest problem with companies needing to raise their rates to earn a profit. But as far as a business model designed to create bitter anger among its customers, I don't think they could have done any better.

Fortunately every single photo on my website -- as well as ads and ancillary images -- are stored separately, so I won't lose anything. But I'm furious at Photobucket for pulling this low-handed trick with no warning and no negotiation and no options.

Um, here's a little head's up to the Photobucket folks: You aren't the only image-storage service available. Bloggers and websites have other options.

We'll be looking at other image hosting sites, of course, but I believe I can speak for many others in the Blogosphere when I say this: Even if Photobucket realizes the errors of its ways and restores their services to everyone tomorrow, their image is now trashed. No one will touch them with a ten-foot pole.

So my apologies for the ridiculous look of the blog's front page. Meanwhile, if any tech gurus out there can recommend an image hosting service, I'm all ears.
Posted by Patrice Lewis at 2:35 PM