Yesterday I heard, once again, the telltale squawks and alarmed clucks of chickens in distress. I dashed outside and through the barn. Peering out back into the corral, I saw the yellow eyes of a coyote peering back at me through the board fences. Being without the shotgun, I resorted instead to slamming out the barn door and yelling. "Ya! Ya!" The coyote ran off about twenty feet, stopped and looked at me again. I ran toward it, yelling. He took off into the woods.

The birds who had been behind the barn were cackling in alarm. I decided to leash up Lydia and walk her through the woods, letting her sniff out the coyote's trail in hopes it would keep it from returning anytime soon. Sadly, as soon as I went outside the corral, this is what I saw: 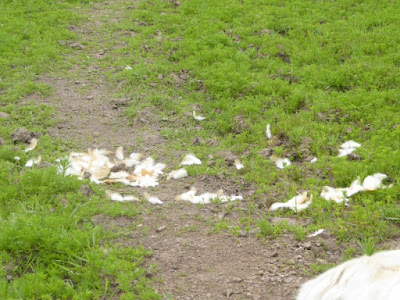 This is what was left of one of our two remaining Buff Orpington hens. I was bummed, as I'm fond of these ladies. 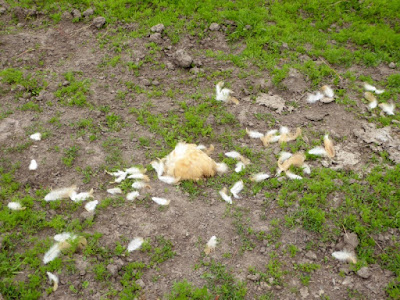 The entire tail had been pulled out in one unit, still complete. 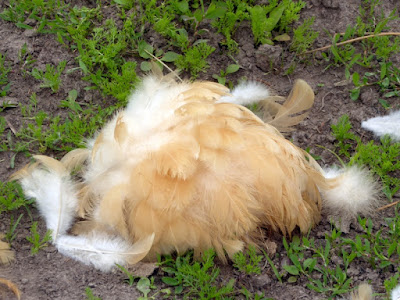 I walked Lydia throughout the woods, letting her choose her own paths, and let me tell you she was hot on the trail of the predator. However no glimpse of the wily creature could be seen, so after half an hour we made our way back toward the corral.

But then Lydia wandered into a small side pen off the barn we seldom enter. Immediately a series of squawks came from the depths. The hen was alive! 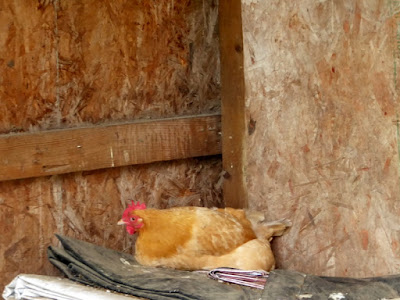 I pulled Lydia out of the pen, tucked her in the house, then went into the pen and gently picked up the hen. She seemed glad to be cradled in my arms and, though shaken, was otherwise uninjured.

Let me tell you, that is one durned lucky chicken.

I carried her into the new barn and put her down. She was still drawn and tense and is completely missing her tail (except for one feather sticking up). 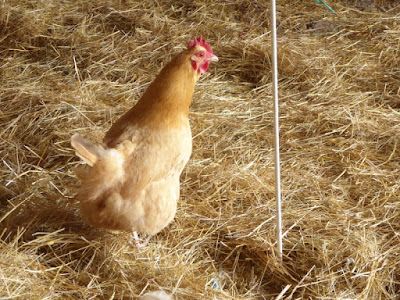 She was still shedding feathers too, as she walked. 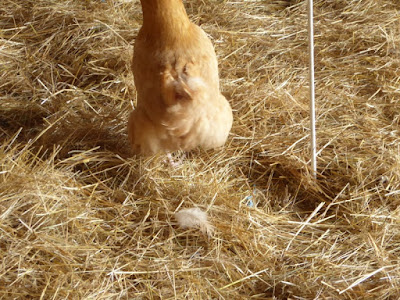 But she's alive and unhurt, and that's a whole lot better than most chickens end up after meeting a coyote. 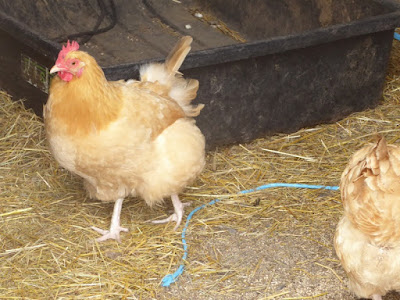 Now that we're apparently on the local coyote population's daily grocery run, attacks on our flock have been increasing. It underscores the need to complete an important project this summer: a large enclosed yard for the birds. I like having chickens scattered all over the property, but -- unfortunately -- so do the coyotes.

Such is life on a farm.
Posted by Patrice Lewis at 2:41 PM