Nesting robins in the barn

Lately, in an effort to discourage wandering early-morning coyote attacks on the chickens, I've taken to setting up my computer in the barn for a couple of hours when I release the birds just after sunrise. So far it's worked to thwart additional attacks. (But no opportunity for a clean shot, however; there's a reason coyotes are termed "wily.") 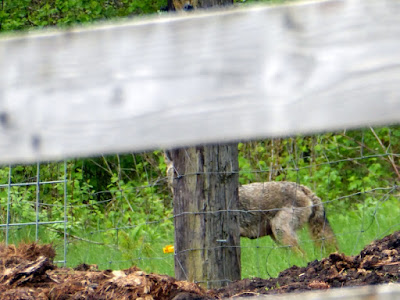 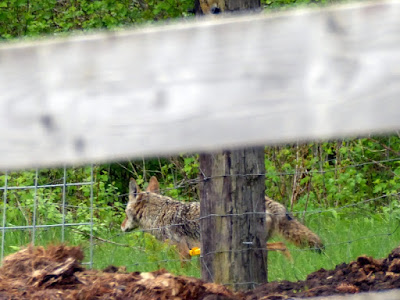 Setting myself up in the barn isn't quite the hardship it implies. Early mornings have always been my favorite time of day anyway, and since the weather is finally warming up, the mornings are pleasant. The air is fresh and clean. The birds are singing. The early sun shines on the budding leaves and flowers. I bring my computer speakers so I have my Baroque music quietly playing. I have hot tea. Life is good. 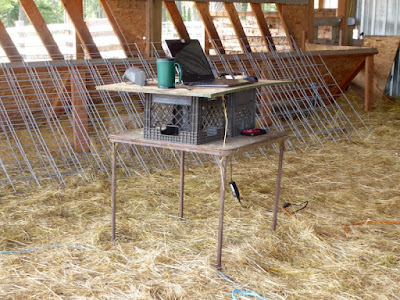 This early-morning time allows me to capture some nice pics of the chickens I might not otherwise get, including the obligatory "rooster on the compost pile" shots... 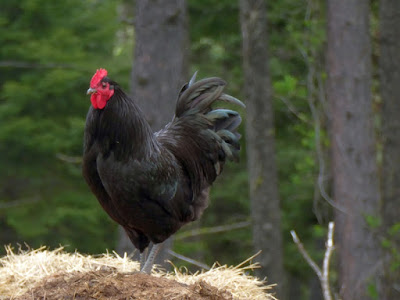 ...though since the compost pile elevates the chickens, it also allows them to spot the coyote early, when he (or she) is slinking around the edge of the woods, casing the joint. Paying attention to their alarm clucks is important (situational awareness!). 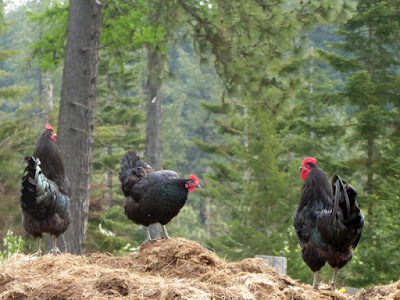 The nice thing about camping out in the barn for couple hours each morning is the little things that take place right under my nose I might otherwise not have noticed. Case in point, the robins who are nesting under the awning. 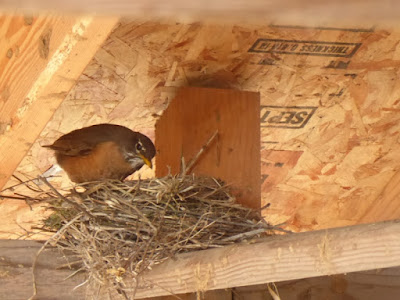 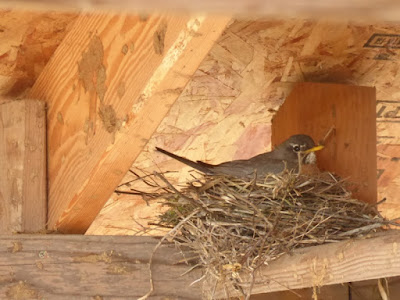 Robins have always been among my all-time favorite birds, so it's fun to watch both parents work hard to bring food to their offspring. 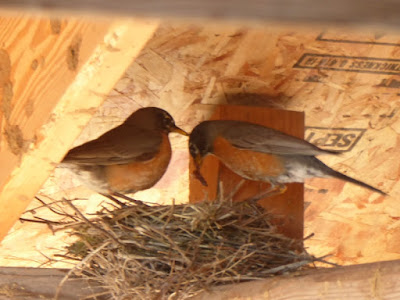 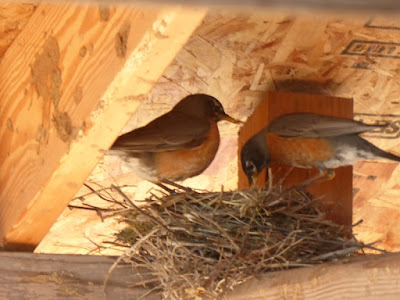 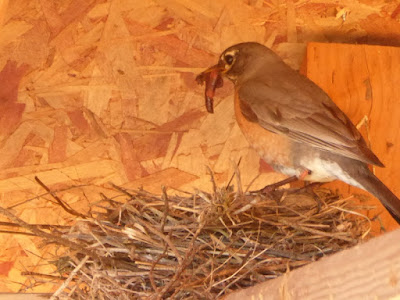 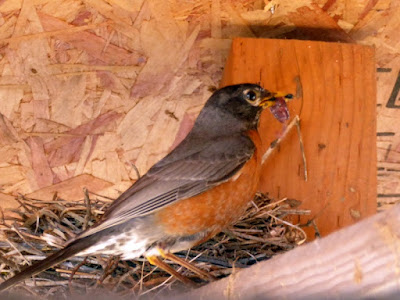 Look at those gaping gullets. 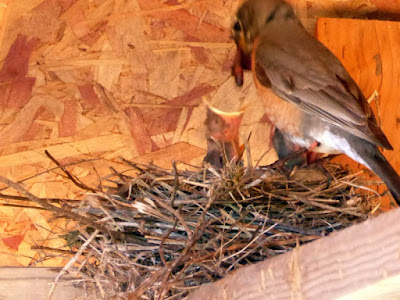 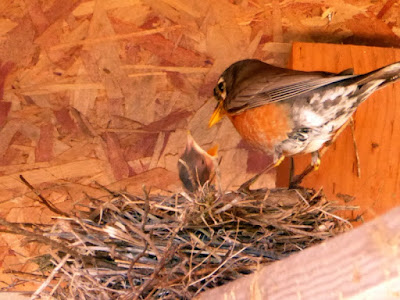 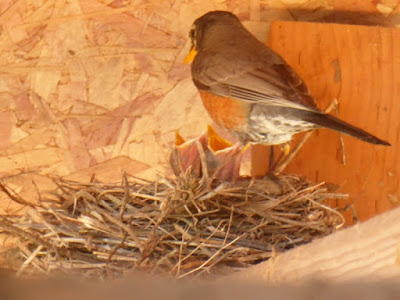 But I wanted to see the babies, so I leaned a ladder against the eave. 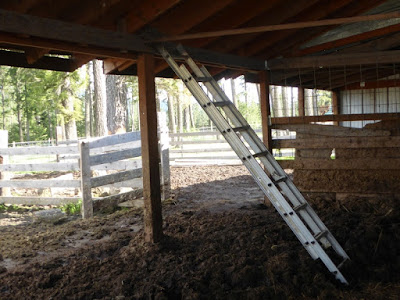 The mother flew away in alarm and watched me suspiciously from nearby. 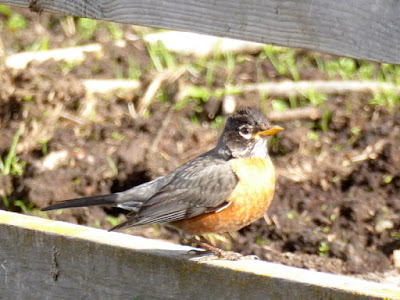 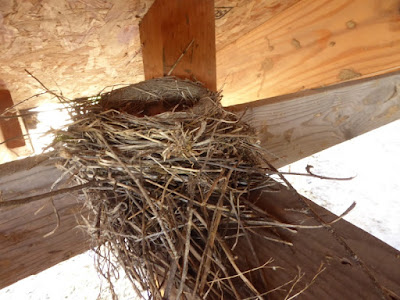 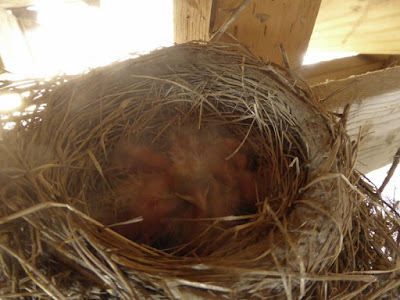 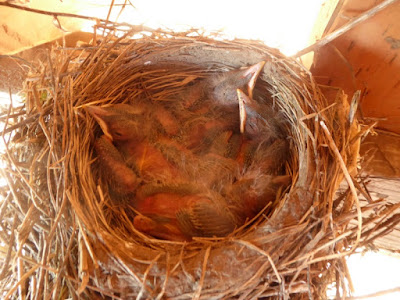 I sometimes catch the robins in moments of leisure, such as this fellow grooming himself between warbling his "teereyo" call. 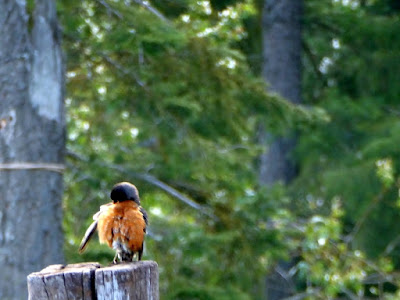 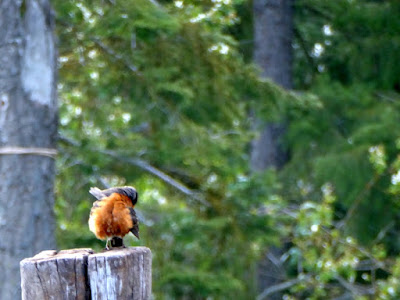 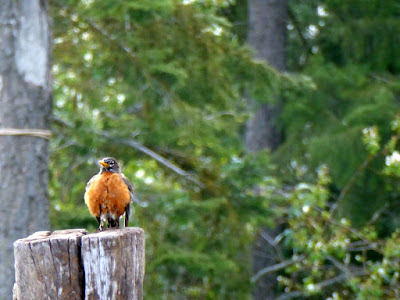 Sometimes the mother dozes while waiting for the father to return with a meal. 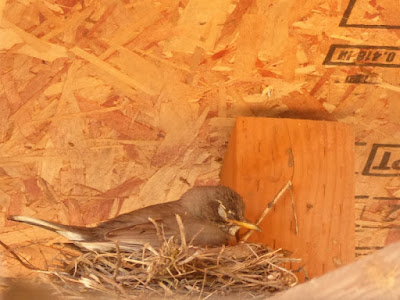 Then when he shows up, she steps aside so he can feed the babies. 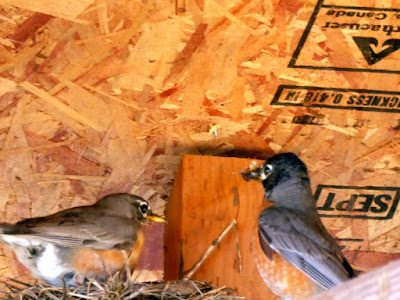 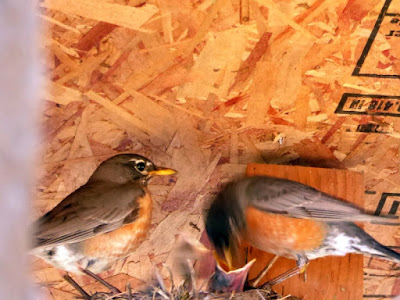 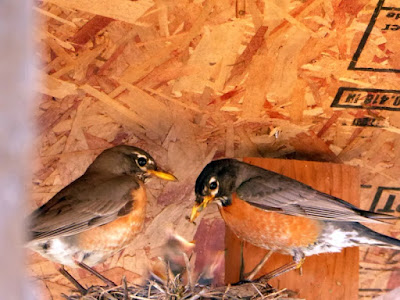 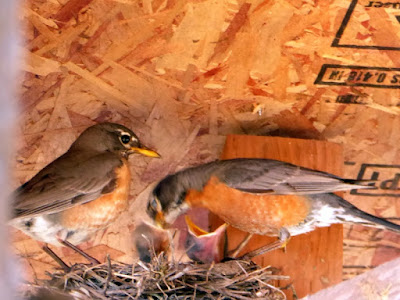 Then -- I wasn't sure I was seeing this right until I confirmed it online -- after feeding, the parents remove the babies' waste. According to Wikipedia: "Waste accumulation does not occur in the nest because adults collect and take it away. Chicks are fed, and then raise tails for elimination of waste, a solid white clump that is collected by a parent prior to flying off." I've watched this, but to be honest it looks like the parents swallow the waste globule, not fly away to dispose of it. I've seen this over and over.

This nest is located in a wonderfully sheltered spot, away from wind and rain. But we have magpies around here, famous for eating nestlings. I've seen bluebirds and robins lose their broods in the past, which is so sad. I'm hoping this family is successful in raising their babies.
Posted by Patrice Lewis at 6:57 AM