Why labels are good

Let me tell you a small story.

Many years ago, back when we lived in Oregon, we needed a chest freezer. Montgomery Wards was going out of business at the time, so we went and bought the biggest chest freezer they had (it was enormous).

Our Oregon house was old (1874) and small (850 square feet), and we had had absolutely no room for such a monstrous appliance. There was no question where it would go: the basement, which was little more than a dirt-floored half-space between the floor of the house above and the sloped hill beneath.

The basement was damp and dark, with no lights and only accessible by an outside door. Except for the darkness, it was a great place for a freezer, and we used it a lot. It allowed us to do things like freeze surplus meals and take advantage of inexpensive or past-its-prime produce.

One day Don expressed interest in some homemade onion soup I had previously frozen in individual-sized portions. "I know just where it is," I said confidently. Taking a flashlight, I went into the basement, fetched the onion soup in its baggie, and brought it into the kitchen where I put it on the stove to heat.

As the soup heated, I noticed a lovely, fragrant smell permeating the kitchen. It smelled delicious, but most decidedly NOT like onion soup. Further investigation revealed I was simmering puréed bananas from a too-good-to-pass-up sale the week before, which I had frozen for future batches of banana bread. We chuckled over the "banana soup" incident for a long time.

Now fast forward to yesterday. I had plans to make pizza for dinner, so the first thing I did was reach into the chest freezer for the shredded mozzarella cheese I always keep there. (You can guess where this is going, right?) 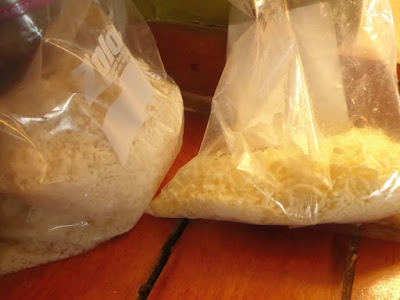 I let the cheese defrost for a couple hours. Meanwhile I made the pizza dough, let it rise, and formed the pizzas. 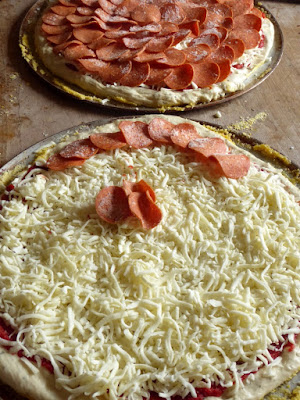 But when I reached into the bag of cheese to spread it over the sauce, I pulled out -- rice. Leftover rice I'd frozen a couple weeks ago. 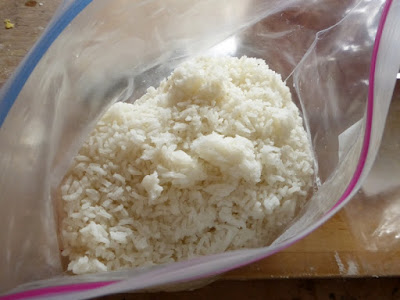 Labels. Yes, labels are good.
Posted by Patrice Lewis at 10:42 AM