I don't follow the daily ups and downs on the stock market -- after all, we don't own stocks -- but of course there are people who watch constantly. They chart, they predict, they explain, they apologize, and they analyze every wobble, every peak and valley, every move.

One such website is ZeroHedge. I dip into this website a couple times a week because it's interesting to read explanations about what the financial world is doing. And ZeroHedge, unlike other financial sites I've seen, tends to look at the overall picture. In other words, they tend to see the forest and the trees.

A couple weeks ago they put up an article entitled For The "Nothing Is Happening... Everything Is Awesome" Crowd in which they gave their views on why "nothing" happened to the financial world in September.

September, it seems, was considered a significant month. Many financial signs appeared to be coinciding in a way that made preppers and investors alike nervous. The stock market made wild swings, then straightened out. Stocks tanked and recovered.

But ZeroHedge saw it differently. To quote some portions (and leaving out some of the financially technical parts, which are well worth reading):

A lot of people out there expected something to happen in September that did not ultimately happen. There were all kinds of wild theories floating around, and many of them had no basis in reality whatsoever. But without a doubt, some very important things did happen in September.

As I warned about ahead of time, we are witnessing the most significant global financial meltdown since the end of 2008. All of the largest stock markets in the world are crashing simultaneously, and so far the amount of wealth that has been wiped out worldwide is in excess of 5 trillion dollars.

In addition to stocks, junk bonds are also crashing, and Bank of America says that it is a 'slow moving trainwreck that seems to be accelerating.' Thanks to the commodity price crash, many of the largest commodity traders on the planet are now imploding.

What we witnessed in September was not "the end" of anything. Instead, it is just the beginning.

Make of this what you will.

Me, I'm glad we haven't invested in the stock market. I'd rather invest in the "livestock" market. 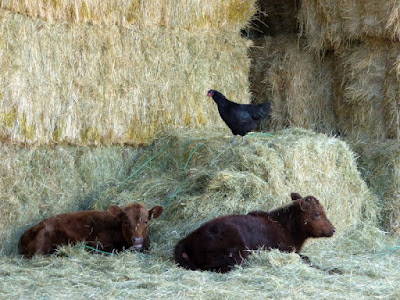 Posted by Patrice Lewis at 7:23 PM