The article introduced the Suttons and their three children. The parents "use a mobile app or go online to transfer money into each child's account" for allowance money. According to mom Julia Sutton, "We don't deal with a lot of cash. Even their lunches are now automated through credit cards, so they're very used to this and not used to cash."

Tracking spending. This is the precise reason why the Lewis family has gone nearly entirely to cash. 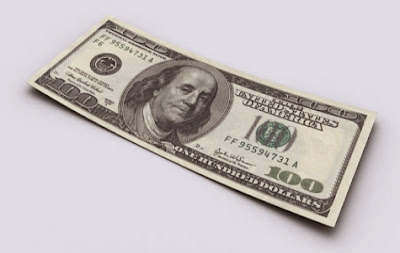 In the last year or two, Don and I have started conducting every possible in-person transaction with cash. We used to write checks for almost everything, but now we simply go to our bank, withdraw whatever amount of money we feel we need, and go about our errands peeling cash from our wallets. We never bounce anything, we never overspend, it keeps us on a budget, and no one can track our purchases.

It's not that our purchases are secretive. Far from it. We buy ordinary stuff -- groceries, livestock feed, supplies for our woodcraft business -- but we don't like the idea of having a little cyber-trail following us all around town, monitoring what we buy. We're kinda funny that way.

I suppose the "head clunk" moment for cash-only transactions came last year when we attempted to purchase some supplies for our woodcraft business at a large, well-known chain store. Every time we purchase something there, the clerks are persistent to the point of aggressive in trying to get us to sign up for a store card.

Nope. Won't do it. As far as I can see, store cards serve only one purpose: tracking. As I wrote earlier, "Tracking everything we do in this country is becoming so egregious and universal, that to refuse to participate is shocking."

So we started doing all possible in-person transactions in cash, and are much happier for it. We pay our bills with checks, and of course online purchases can be tracked since we have no option; but everything else is cash. We save receipts for anything that's considered a business expense.

Besides, using plastic is risky. Every time a non-cash transaction takes place, there's a possibility of data theft. This happened to Target on an enormous scale last December. Ironically I had been at Target the day before this story broke, where I purchased something in cash. It was nice to know I had nothing to worry about from this particular breach of security.

In fact, a recent follow-up story came out about Target customers suffering from identity theft in the wake of the security breach. Analysts say one in three Americans affected by a data breach ultimately became the victim of fraud last year, up from one in nine in 2010.

The article states, "In the past year, Target and other major retailers have said they're increasing security. President Obama has urged banks and stores to speed up adoption of 'chip-and-pin' payment cards, which are harder to hack. But reports of data breaches continue. And as Federal Trade Commission member Terrell McSweeney said recently, 'Disturbingly, the news has seemed to desensitize many people to the real risks created each time an event occurs.'"

So how's this for a concept: USE CASH INSTEAD OF PLASTIC.

I suppose I risk being robbed of my cash while I'm on my "city day" excursions, but (a) I'm not carrying that much cash at any one time, and (b) if someone steals my purse, I have a lot more to worry about than simply the cash, because it means my driver's license, concealed carry permits, and yes my single credit card have all been taken. Losing my cash will be the least of my concerns.

I suppose it's a natural thing for people to embrace the latest whiz-bang way of doing things, including going cashless. Certainly I think it's true when the article pointed out that children are growing up in an increasing cashless society. But being the stubborn old fart that I am, I don't see the need to join the parade of sheeple.

Along these lines, a funny thing happened back in 2012 when I was on my annual sales trip to Portland. Our woodcraft business has a merchant services account (in other words, we can accept credit cards), and I've noticed credit or debit cards are the preferred method of purchase for most customers. So I always bring my manual "chunk chunk" knucklebuster credit card machine with me, and run all cards on it.

The reason we have a manual machine is because I don't have a smart phone or any other means of running cards electronically (nor do we need any -- we only sell retail once a year). Besides, a manual machine works without electricity or phone service, though we do risk having a customer's credit card "bounce."

One day I was transacting a man's credit card, and when I turned to have him sign the receipt, I saw him staring at the machine. "What's that?" he asked.

"It's a credit card machine."

Okay, I felt old. But -- and I'm not kidding, this actually happened -- not thirty minutes later I was processing yet another man's credit card when I turned around and saw him also staring at the machine. "What's that?"

"It's a credit card machine."

"Wow, I don't think I've ever seen anything like it! Can I take a picture?"

I couldn't help it. I replied, "Only if I can take a picture of you taking a picture." 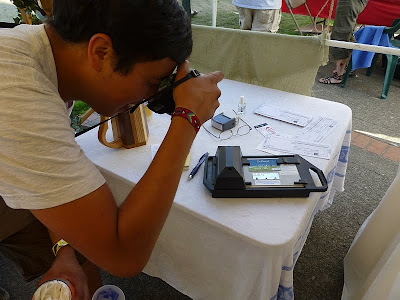 Notice the fellow's age -- a firm Generation Y kinda guy. So yes, ways of doing business do change, and perhaps some day cash will fade from use.

But not as long as I have anything to say about it.

UPDATE: Reader Holly emailed this little anecdote, which I asked permission to post:

I recently purchased a t shirt at kohl and handed the lady cash. She looked at me like I handed her a pile of dog poop. She wanted my email address, I replied I don’t have a computer. That look was even better. Then she was appalled that I did not want to open a credit card and save an additional 10%. I figured security was coming to get me next as I refused that offer. The whole transaction took over 10 minutes and ticked off the people behind me, waving their credit cards. My$20 bill was the only cash in the register!! I laughed all the way home.
Posted by Patrice Lewis at 5:37 AM