A reader saw a glimpse of Matilda in the Fall Cattle Roundup post and asked whether or not she'd had her calf.

If you recall, Matilda was due to give birth some time in September. Because she had trouble nursing her last calf, I wanted her close as her time got near, so in early September I fetched her into our corral until she calved. 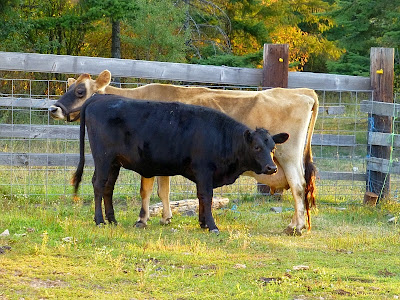 We kept Matilda in the corral for a few days but it became apparent she wasn't anywhere near ready to have her baby. Her udder was flaccid (cows usually "bag up" prior to birthing, and poor Matilda usually blows up like a beach ball) and her shape was lean, not rounded. So after a few days we released her with the rest of the herd.

(This is Matilda's udder a few years ago, shortly before giving birth to a calf.) 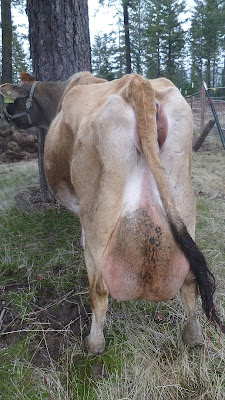 (This is Matilda's udder a month ago, allegedly when she was close to giving birth.) 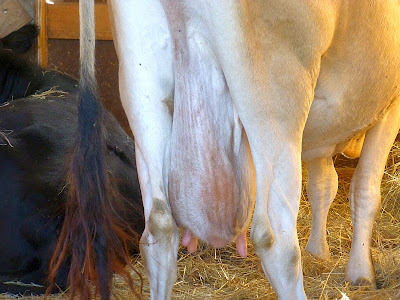 Nonetheless we stayed distantly vigilant about her condition. A couple of days after we released her, I heard her bellowing from the neighbor's property (which we lease every fall for the cattle to graze). Thinking this was it at last, I took a lead rope and walked over to pull her back into the barn, only to find... she was in heat.

So dear Matilda, despite being with the bull for about six weeks last winter, apparently didn't get bred. Our bull is a proven sire and has many calves to his name, so I guess for whatever reason Matilda's plumbing didn't "take." 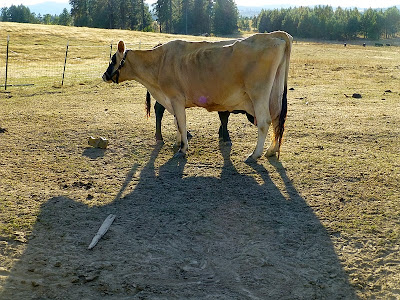 This is a shame on two scores: One, despite her physical flaws, Matilda is still my best milker; and two, Matilda LOVES being a mama and will miss having a new calf this year. 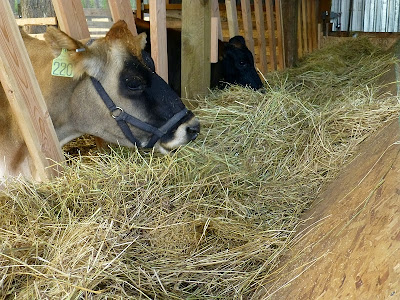 But oh well. We'll put her with the bull this December and try again.
Posted by Patrice Lewis at 5:37 AM

Email ThisBlogThis!Share to TwitterShare to FacebookShare to Pinterest
Labels: Matilda