The kindness of strangers

This is our new microwave. 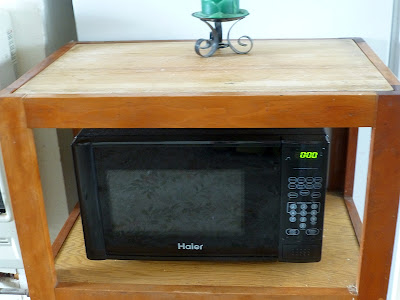 After our old one broke last week, I found this on sale for $40. Fits right into the hand-made trolley Don made many years ago.

But an interesting thing happened just after the old microwave broke. A reader named Ken was going to send me $200 for a new microwave.

I don't know Ken, but even if I did I would have had to reject his kind and generous offer. You see, shortly after beginning my column with WND and even before this blog was launched, Don and I decided on a strict "no gift" policy from readers. Sadly, generosity can be misconstrued, and we didn't want any aspersions cast.

This doesn't mean we're ungrateful for the impulse, or that gifts don't unexpectedly come our way. A lovely family sent us $100 over the holidays -- a total out-of-the-blue surprise -- so I took the money and donated it a pastor who oversees our local Second Harvest distribution, a humble and hardworking man who often puts in a lot of his own limited money into the program.

So I tried my best to let Ken down gently when it came to turning down his generosity. And then he told me the most extraordinary story. It was so wonderful that I asked permission to post it here.

If I may have a few moments I would like to tell you what happened to me long ago and why I made the offer I did.

In the spring of 1965 I was driving through the rain to my girl friend's house. I lived in a rural area and strangers were few. We pretty much knew each other by sight if not by name. I got a flat tire on the passengers side and pulled over to change it. After I had the car jacked up and the tire off, the jack sunk into the mud and the car tipped to the side and I barely jumped clear as it fell on the jack and spare tire I was just about to put on. The nearest farm was over 1/2 mile away and I knew they were not home. I stood there wondering what to do when a stranger pulled up in his pickup. I had never seen him before. Without saying much he got out his jack and jacked up my car so I could get my tire on. I started to pull out my wallet which didn't contain much, but I was going to pay him what I could for helping me. He held up his hand and said, "Oh no. I don't want any money. But when you see someone who needs help, you stop and give them a hand. And when you are done you tell them to do the same when they see someone who needs help and tell them to help whoever they find that needs it."

I promised to do so and he drove away and I never saw him again, nor could I find out who he was. So that is what I do and why. I've done it hundreds of times since and I hope that somewhere it has been a blessing to someone. When I see those stories about angels taking on human form and influencing people I can't say that I believe them. But I can say that I don't not believe them either.--Ken

Whoever this stranger who lent Ken a helping hand might have been, isn't it something that Ken took that impulse of generosity and ran with it his whole life? A true Hebrews 13:2 moment. And now Ken is the angel, passing on this unknown stranger's wonderful legacy.

I wanted to publicly thank Ken -- as well as the other family who donated some of their Christmas bonus to us -- for their kindness, and I urge everyone to follow the impulse of generosity which has so blessed their lives.
Posted by Patrice Lewis at 12:10 PM