Living paycheck to paycheck on half a million bucks per year

If I could hazard a guess, I would say most people live paycheck to paycheck. Things are pricey and it's often tough to make ends meet. Apparently this affliction also extends to the upper classes.

Consider an article a friend sent on the budget breakdown of a couple who earns half a million dollars a year and still lives paycheck to paycheck (hint: we're supposed to feel sorry for them).

"Sam Dogen of 'Financial Samurai' breaks down the budget of two New York City-based spouses, each of whom makes $250,000 a year as a lawyer," starts the article. "They're 35 years old and they have two young children. 'This one couple shared their story and I decided to anonymously highlight their reported expenses,' Dogen tells CNBC Make It, with a focus on why they end up feeling 'average' even though they’re such high earners."

We are then invited to peer into the expense report of this family, which breaks down as follows (the numbers are a little small, sorry): 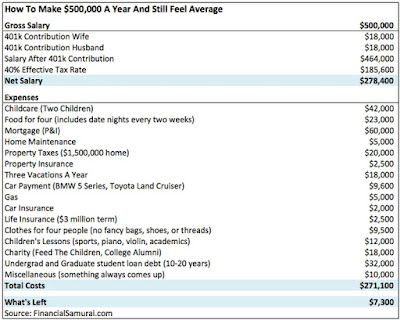 Having lived with extreme frugality for the last 25+ years, is it heartless of me to feel very little pity for this family?

Let's go over their numbers. New York City is clearly an expensive place to live, so it's a good thing they have salaries commensurate with their living expenses. Still, you can't tell me there aren't places they can economize. I will work on the assumption they're not interested in having a stay-at-home parent or moving to a less expensive area.

I won't mention taxes and insurance costs. Those are beyond this family's ability to control. They also contribute solidly toward their 401(k) accounts, so good for them. But here are some of their other expenses:

Childcare for two children: $42,000. Presumably they have a nanny. Our daughter is a nanny. This isn't an outrageous cost for NYC.

Home maintenance: $5,000. No argument, this is probably reasonable for where they are.

Three vacations a year: $18,000. Again, yowza. But from what our daughter reports as a nanny, this isn't an uncommon expense.

Car payments: $9,600. This is $800/month. I guess if you like nice cars, this isn't unreasonable, though I've always heard driving in NYC is redundant thanks to their public transit system.

Clothes for four people: $9,600. This is $800/month. I'm certainly glad Don and I don't have appearances to keep up, because even when there were four of us at home, we probably spent $200/year (not per month, per year) on clothes. Now, without growing children and with just the two of us, it's more like $50/year.

Children's lessons: $12,000. That's $1,000/month. I sincerely hope the kids are talented in their music and sports choices, because that's a lot of money.

Student loan debt: $32,000. That's over $2600/month, which staggers me and is a superb example of why I recommend avoiding student loan debt like the plague.

Miscellaneous expenses: $10,000. This is a bit over $830/month, probably not unreasonable for NYC.

"After taxes, fixed costs, childcare and discretionary expenses," notes the article, "there's only $7,300 left each year to go towards other savings goals, investment accounts or retirement funds. ... Ultimately, a hefty paycheck doesn’t always guarantee wealth or financial peace of mind. By contrast, budgeting and living beneath your means, no matter your income level, can help you out tremendously in the long run."

But another factor these people should consider in their budget is their ego. How much money do they spend trying to impress others? This is another difference between NYC and other less-crowded places: impressions matter. That's why they spend so much on housing, vehicles, clothes, and lessons for their kids. 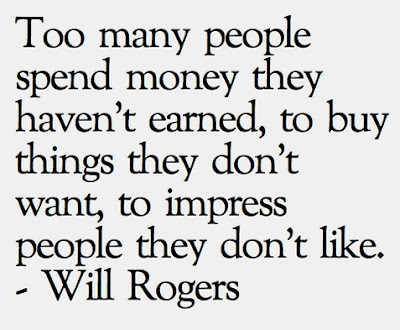 Now I realize I can't redesign everyone's lives according to my personal convictions, but let's take this family and do just that.

Let's take them out of NYC and put them in, I dunno, Omaha or Great Falls or Spokane. Wham, their housing costs and and taxes are probably cut in half. So, presumably, are their salaries (bringing them in the range of $250,000/year).

Now let's keep one of the parents at home to raise their kids. Sure, that halves their salary again (to a presumed $125,000/year), but it also eliminates childcare expenses as well as some of the discretionary spending such as food and clothes. Quit with the fancy vacations already (try camping). Pay off your cars and buy used next time. There's nothing that can be done about student loan debt, sorry. 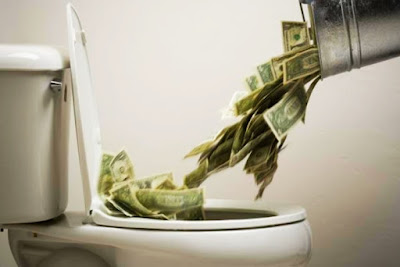 So can the average family live comfortably on this mythical $125,000/year? Let us hope so. Considering what we earned during our parenting years, raising two wonderful and well-balanced children and living a perfectly comfortable lifestyle, I sincerely hope so.
Posted by Patrice Lewis at 6:13 AM