Here are some random photos from the last couple of weeks. 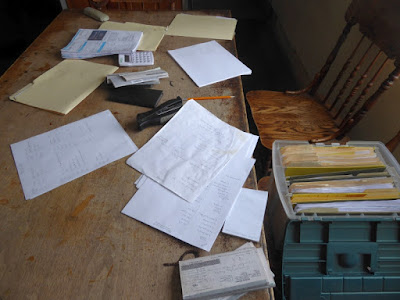 Burning shop waste in the woodstove. This gives us a two-fer advantage: one, it cleans out the shop; and two, the wood is hardwood so it gives a nice hot fire. 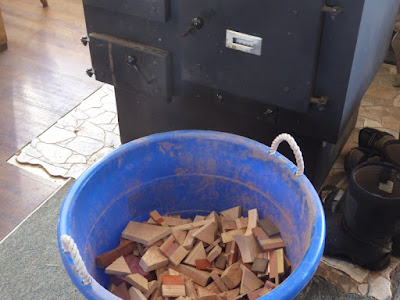 The temperatures are slowly, slowly rising. It's zero degrees (Fahrenheit) as I write this, but daytime temps are climbing above freezing, sometimes even into the high 30s and low 40s. As a result, the snow is starting to compact. It's down to about 18 thick on the ground (better than the 30+ inches of a couple weeks ago).

The other day I walked outside and saw a whole bunch of chickens clustered on a tiny little patch of bare ground. 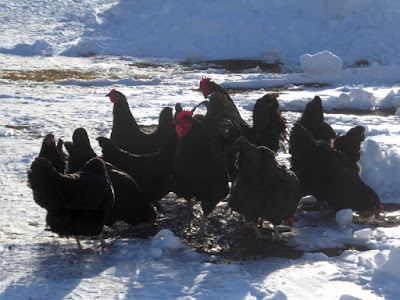 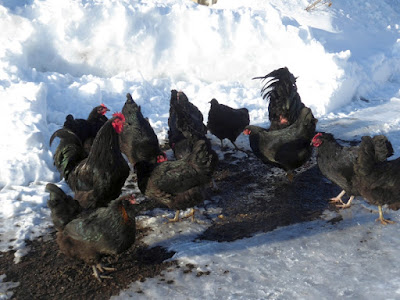 It was the first bare ground they'd seen in a while, so they were pretty excited.

Speaking of chickens, this fella is bottom of the rooster totem pole. As a result, he gets beat up if he stays in the coop, so he spends most of his daylight hours hanging around the (snow-free) barn. I give him a separate pan of food, and he eats it ravenously. 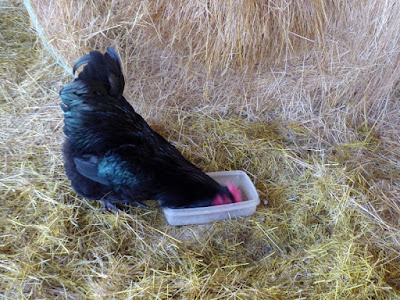 He's a very sweet and grateful rooster as a result.

Yesterday morning dawned cloudy, but one single shaft of sunlight broke through the clouds and lit up a snow-buried tank on a neighbor's property with an almost day-glo orange. 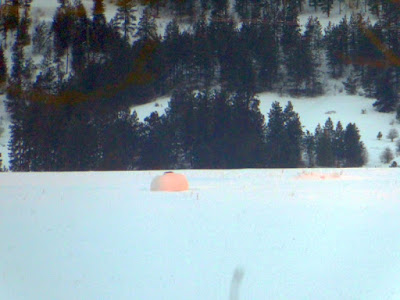 I tried to get a photo of the sunbeam itself, but by the time I booted up and got outside, the moment had passed. 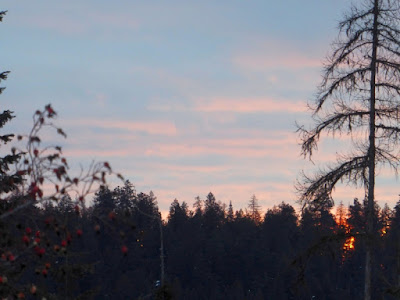 The weather goes back and forth. We'll have a few days of calm and relative warmth, then suddenly the wind will whip up and start drifting the snow. On Thursday we took Mr. Darcy for his morning run, and you can see the quasi-drifts trying to close the road. 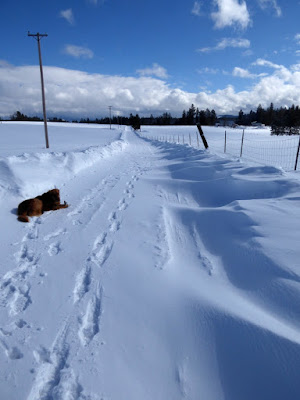 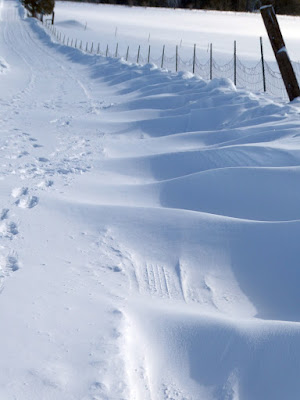 When the nighttime temps plummet but daytime temps get above freezing, the result is a crust on the snow. This morning it was almost -- almost -- strong enough to support me. For the first three steps I walked on the surface, then I plunged through. 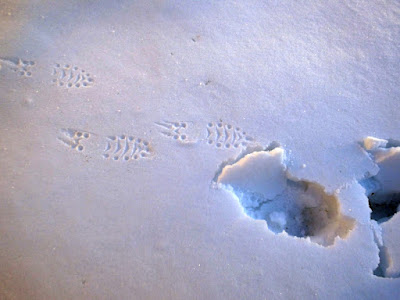 I've been photographing animal tracks as I see them, which surprisingly isn't very often. Here's a deer as it hopped the fence from our neighbor's property onto ours. 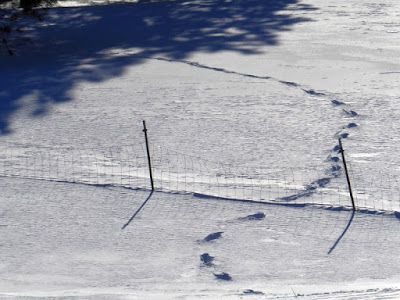 Deer tracks in less-deep snow, where it could walk. 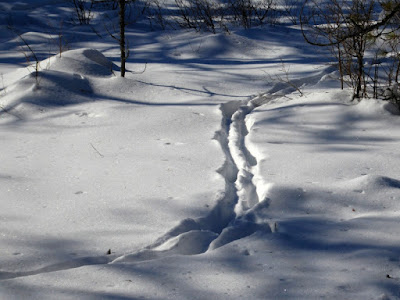 Deer tracks in deeper snow, where it had to leap. 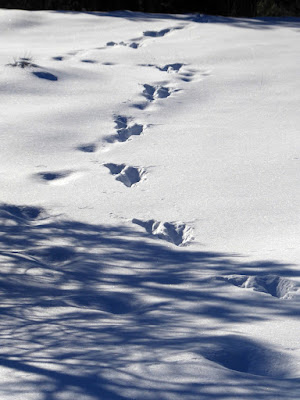 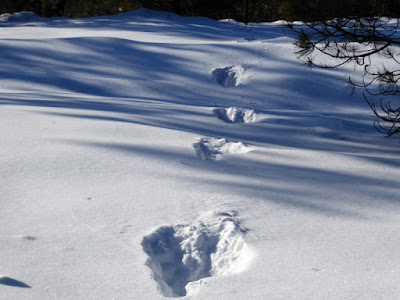 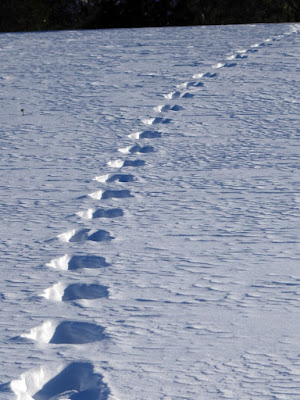 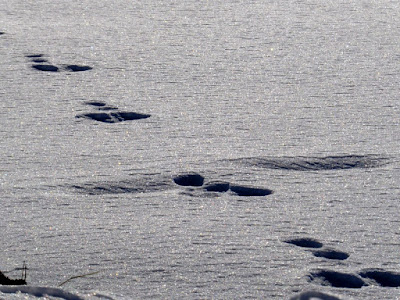 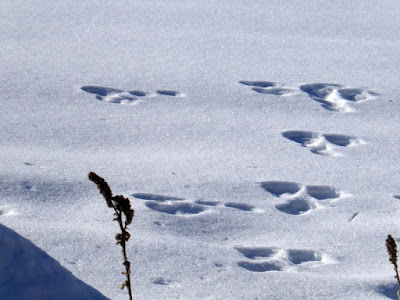 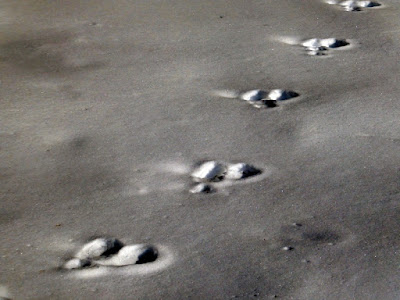 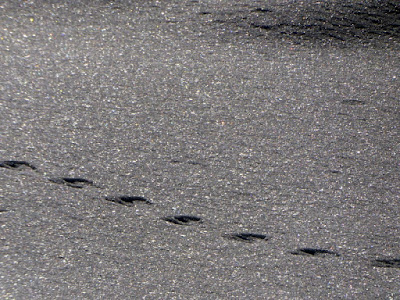 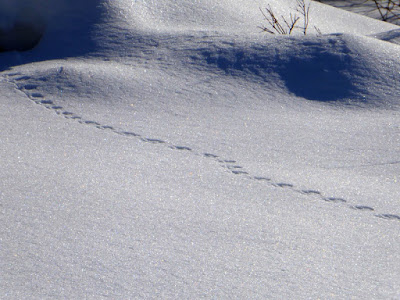 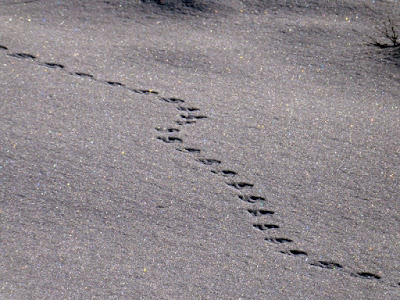 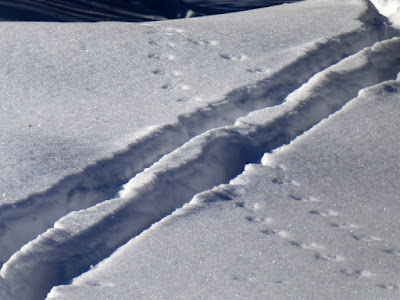 Tracks from Oregon juncos (from our front porch, where we're feeding them). 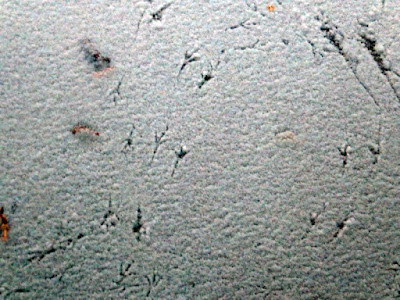 The season is changing, no doubt about it. Despite the snow on the ground, birds are starting to return. We haven't seen any robins yet, but I'm hearing blackbirds for the first time this year. 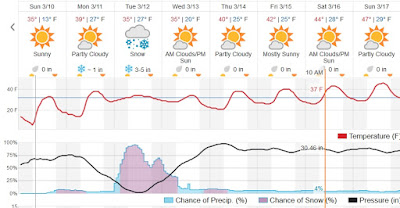 But it is what it is. Spring will be that much sweeter when it finally arrives.
Posted by Patrice Lewis at 8:35 AM