The Case of the Disappearing Chickens

Yesterday was a wildly busy day.

In addition to normal tasks around the homestead, I had my WND column due as well as some other writing deadlines. Plus we were expecting 30+ people for the neighborhood potluck, so we had to clean the house and grounds, and prepare dinner.

In the midst of this, Mr. Darcy disappeared. He had been in the yard, and the first hint he wasn't where he was supposed to be was when I stepped outside for a moment and heard him barking from a strange direction.

Because we had a howling wind (making acoustics tricky), it was hard to determine where the barks were originating. Don and I walked up and down the driveway, trying to find our missing dog -- and finally turned around to see him in the woods, on the other side of this gate. 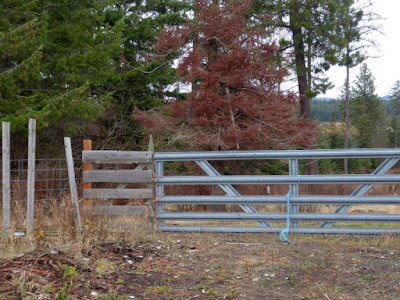 Huh? How on earth did he get there? He was without his collar and seemed wildly relieved when Don opened the gate and let him out. He came into the house and collapsed into a nap.

Okay, next question, how did he get out of the yard? Further investigation revealed the tie on a back gate had come undone. Don re-fastened the gate and made it secure.

Our next concern was the chickens. Darcy, given his druthers, would happily chase down and kill every chicken he could, so we braced ourselves to find a slaughter. We have about 27 birds at the moment, and after Darcy's little excursion, we would not have been surprised to find that number greatly diminished.

How did he get into the woods in the first place? There are gates and fences everywhere. The most likely answer is the gate into the feedlot, designed to keep cows in but not (necessarily) dogs out. The chickens often hang around the feedlot, so Darcy probably went chasing after them and slid under the gate. 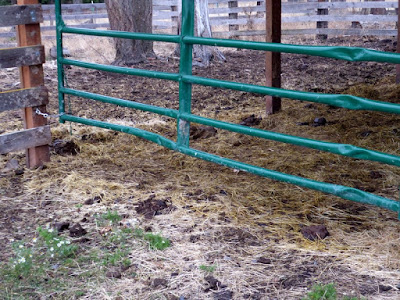 Grimly we went about searching the usual chicken haunts, such as the compost pile where a dozen or more birds are normally found. 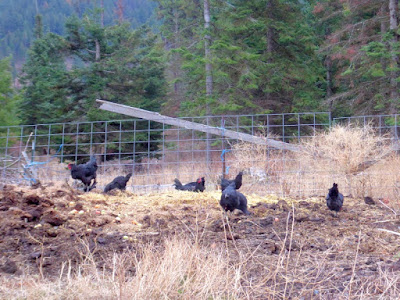 But the compost pile was deserted.

We checked the coop. There were a few birds in there, but they were unruffled and unharmed. 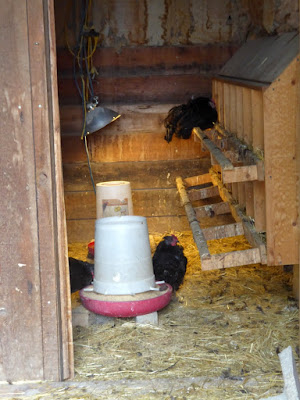 We walked all around the barn, feed lot, corral, and the gate where we found Darcy -- and saw no chicken carcasses or injured birds. No piles of feathers. No chickens at all, in fact. And -- this is critical -- Mr. Darcy didn't have the least drop of blood on him. So maybe he didn't kill any chickens after all...?

Since we had so much to do, we continued with our tasks for the day, but something kept nagging at me. No chickens. None. Not on the compost pile, not in the barn, not in the feedlot. Something was wrong.

Finally I put on my mud boots and walked down into the woods, looking a bit further afield in case we missed a scene of carnage somewhere.

I found Darcy's collar, wedged among the pile of logs we're gradually cutting up for firewood. 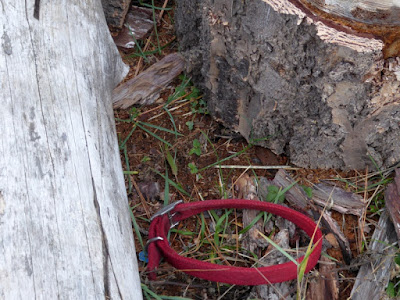 I searched carefully around the woodpile but didn't see any chickens, living or dead, wedged in among the debris. And so we had a mystery on our hands: The Case of the Disappearing Chickens. Where could they be?

Evening came and none of the missing birds appeared. We fed the cows and remaining chickens as usual. The house was cleaned and ready for guests. Dinner was prepared. But the coop remained sparse -- only 13 of the 27 birds showed up for bed.

Whatever happened to the remaining 14 birds was anyone's guess. But one thing was certain: If they were down in the woods during the night, they were highly likely to be picked off by owls and coyotes.

Don was more optimistic. "They're probably just hiding," he assured me. "They'll be back." I wasn't so sure.

People started arriving for the potluck -- more and more and more (our potlucks are growing). Over the chatter and happy conversation, I mentioned our Great Chicken Mystery, and everyone offered sympathy. There isn't one chicken owner who hasn't experienced a catastrophic loss of their flock through one means or another.

Late in the potluck, Don stepped outside for a few minutes. Then he came back in and made a general announcement: "The kids are home!" Everyone cheered.

He was right. After all the guests left, I took a flashlight and did a headcount: 27 birds, just as there should be. 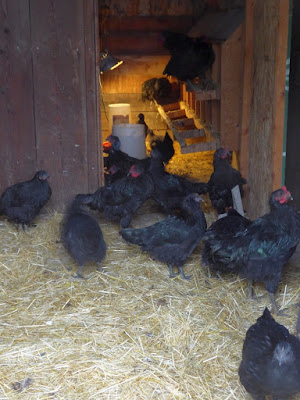 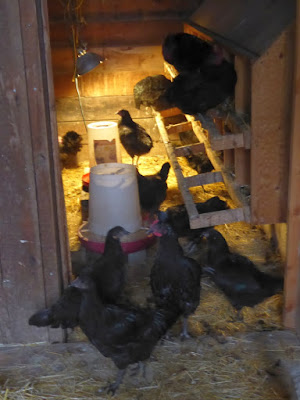 So while we're grateful to have our flock restored, I'm still baffled where those missing 14 birds could have been hiding for so many hours. Nonetheless, it's comforting to know that even when he was unrestrained and free to kill all the chickens he could, Mr. Darcy didn't kill a single one. 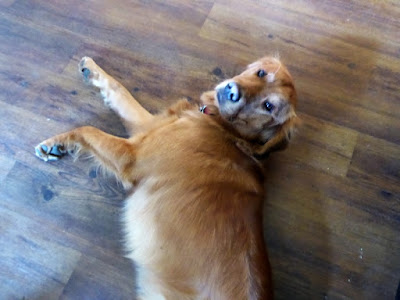 Not that we're willing to take a chance on that. He stays on a leash while in the driveway.
Posted by Patrice Lewis at 11:27 AM