A few days ago I put up a post about the horrifically bad wasp year we're having. Outdoor activities had to be suspended except before dawn or after dark because of how many stinging insects were swarming the area.

We're not alone -- everyone we know is experiencing similar issues. Recently Don was in a hardware store, and he noticed they had shelves and shelves of wasp traps for people desperate to control them. 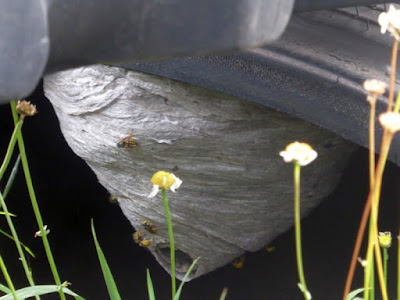 Wasps in this volume aren't just annoying, they're dangerous -- particularly for people who have reactions to stings. Everyone felt they were being held hostage indoors. Nearly every day, we would set a trap and it would fill almost to the brim. Every. Single. Day. 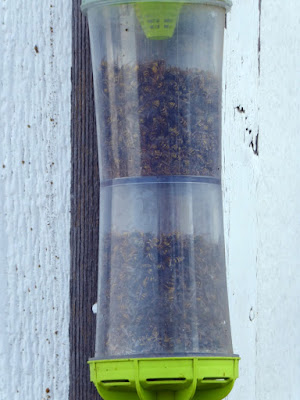 Then a commenter named "MissV" (and possibly a second commenter, Anon5:29) posted a sure-fire method of killing wasps using fibronil, the active ingredient in Frontline (and knock-off brands) tick repellent for dogs. We just happened to have some (since Mr. Darcy was getting ticks up the whazoo this summer), so we decided to give this a go. This is what is being passed around on Google:


Fipronil is a broad-spectrum insecticide that disrupts the insect’s central nervous system. Fipronil is the main ingredient in Frontline and other flea and tick killer used on dogs. Recall that Frontline is placed on the dogs back at the withers and keeps the dog free of these pests. It is not harmful to pets or humans in the dosage of casual contact. It will kill other yellow jackets that come into contact with it as it dies in the nest.

Several of the flea and tick killers available at your pet store or at Big R (Petco, etc.) contain Fipronil. But be careful to get the product that contains only Fipronil as its active ingredient. When Fipronil is coupled with other ingredients, the wasps will ignore it.

Mix 6 to 10 drops into a golf ball sized gob of raw hamburger (if you macerate it in a blender it works better). Place this gob of poisoned meat into a small plastic cup. Add 1/2 of a cotton ball on which you squirt half the contents of a tube of RESCUE Yellowjacket Attractant found at most hardware stores. Place the poison bait cup in the shade 2 to 4 feet off the ground and 10 to 15 yards away from doors, patios, grills – people trafficked areas. 80% of the Yellowjacket nests within 100 yards will be dead within 24 hours. 95% will be gone in 48 hours. Renew the bait every day (Yellowjackets don’t like dried or rotting meat). After 4 days 100% of the Yellowjacket nests within 400 sq. yds. will be dead. Repeat baiting after 4 weeks for a few days. It should end your problem.

As a monitor on the success of the project this person kept one of the Rescue Yellowjacket Traps in the yard and dumped it every night to check on the quantity of wasps in the area each day. The count dropped from several hundred/day to 2-4 wasps/day in 2 days and in the forth day, there were none.

1. Use only Fipronil – no other active ingredient. It’s found in flea and tick killers.

6. Repeat after a month for a few days.

We decided to give this a try and set two traps. We started with two golf-ball sized balls of ground beef... 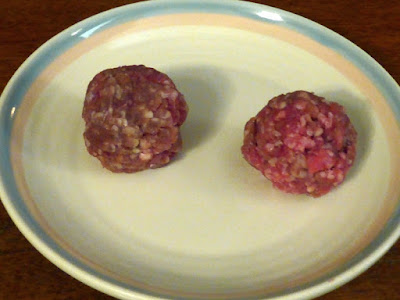 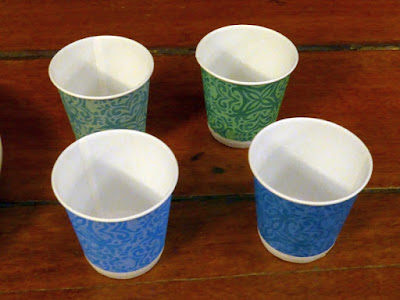 In two of the cups, we punched holes in the bottoms. 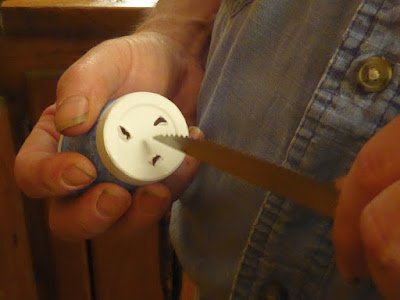 Then we got two cotton balls. 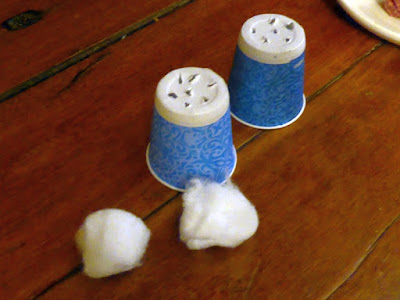 We already had on hand Rescue wasp attractant and Frontline Plus tick repellent. 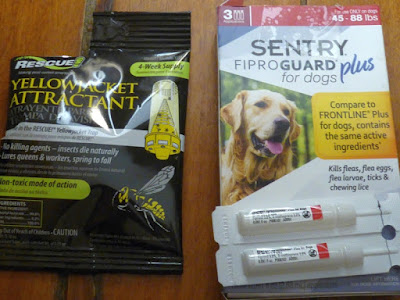 We put the cotton balls in the bottoms of the paper cups that did NOT have holes punched in them... 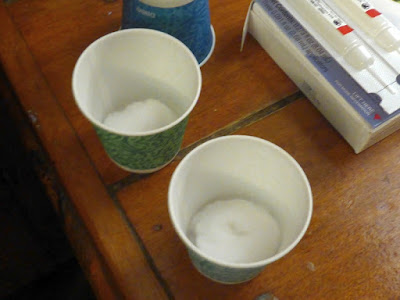 ...and added wasp attractant to the cotton. 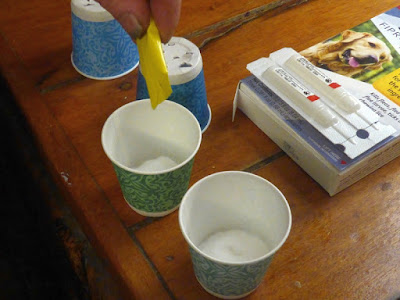 Then we loosely fitted the paper cups with the perforated bottoms over the other cups. 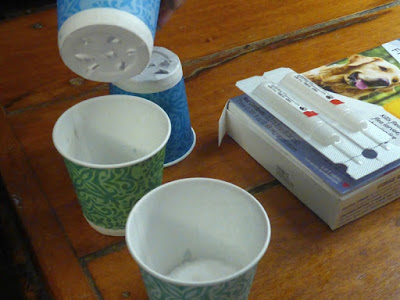 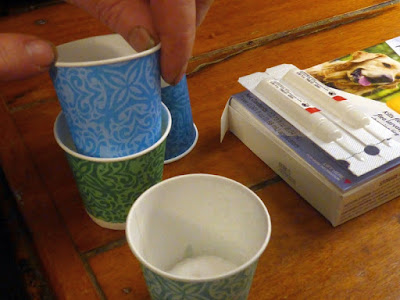 Next we took the ground beef and mashed it up a bit more in a food chopper. 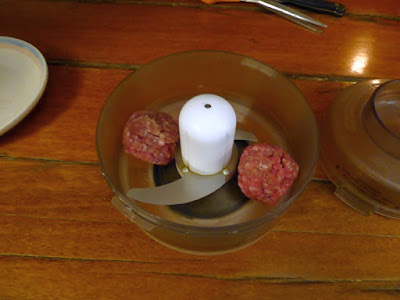 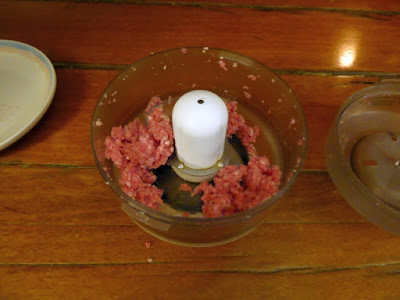 To this meat, Don added 16 drops of the fipronil tick repellent. Each meatball needs about eight drops of poison (I gather too much isn't good) and since we had two meatball's worth of ground beef, he added 16 drops. 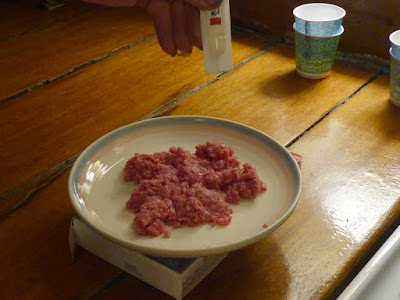 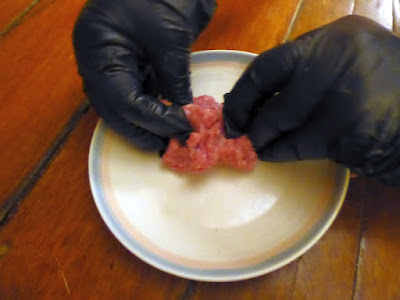 Then we re-formed the meat into two meatballs and put them in the upper cups (the ones with the perforated bottoms). We put these in jars, capped them, and put them in the fridge overnight. You never want to put wasp attractant out during daylight hours -- the stuff works instantly -- so we stuck it in the fridge overnight so the meat wouldn't go bad. 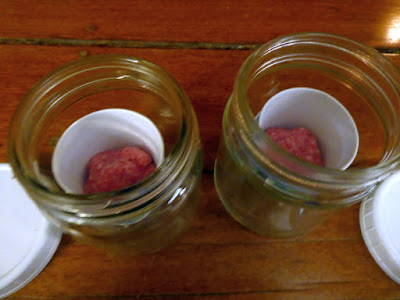 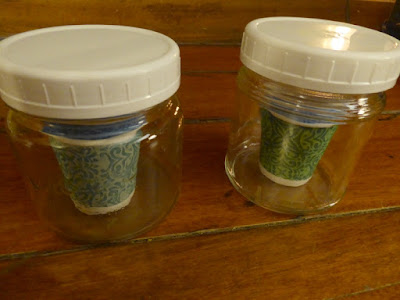 Early the next morning (well before sunrise), I removed the lids and put the jars in two locations, where doggies couldn't go. Both locations were in the shade so the meat wouldn't dry out too fast. One I put in the orchard, and the other I duct-taped to a small tree trunk along our driveway. In neither location were congregating wasps likely to bother anyone.

At first nothing happened. I think the chilled wasp attractant wasn't doing its job until it had a chance to unchill. But within a couple of hours -- my goodness -- the bait was swarming with wasps. 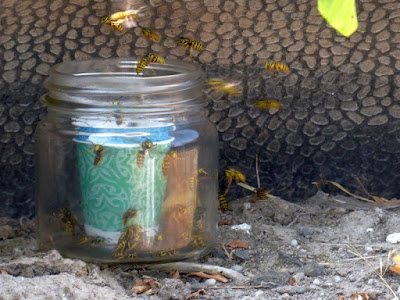 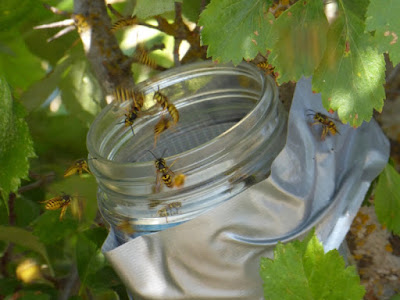 All day long the wasps carried snippets of poisoned meat back to their nests.

By the next morning, the volume of meat was reduced by more than half, and there were some dead wasps in the jar. 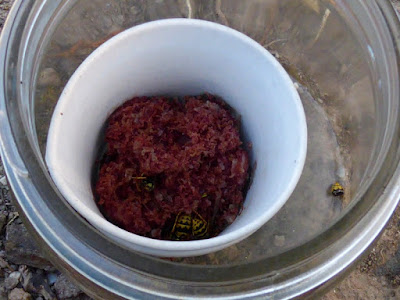 I checked on some nearby nests and noticed the insects looked very lethargic. They weren't moving much, and certainly weren't flying around. 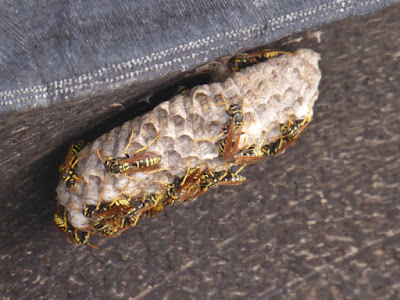 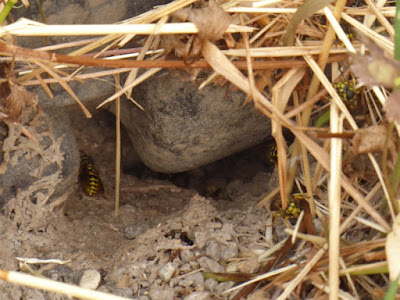 As the day progressed, the lack of wasps was extremely noticeable. There were a few, yes; but we estimate the quantity was down by 95 percent or more. To test this, Don baited a trap in the morning and set it out. by afternoon, it had caught maybe five wasps. Remember, previously this trip would be full to the brim. 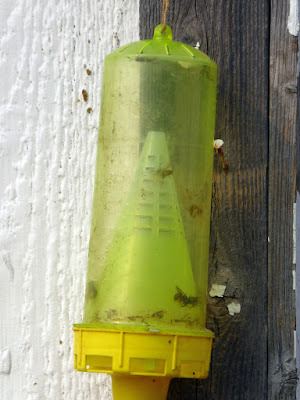 The difference outside is staggering. We can walk around without a problem. The tension is gone -- I didn't realize how tense we were until the threat was removed.

We still have some wasps, so we're going to repeat this procedure a second time, and possibly a third if needed.

This works, folks! If you're plagued by wasps, I urge you to try this to control them.

And the nicest part of all? It doesn't bother honeybees, which don't eat meat and aren't attracted to wasp attractant.
Posted by Patrice Lewis at 5:19 PM