We have a neighbor who keeps both horses and cattle, and at this time of year he's always on the lookout for Good Deals in hay. He's one of those people who simply knows everyone, and so Good Deals are likely to come down through the grapevine to him before almost anyone else. Such was the case this year when he scored round bales of bluegrass for $55/ton, an incredible price.

We just sold off two six-month-old calves, so we're down the seven animals we'll be over-wintering. In years past we've had as many as 23 animals (way too many for our acreage) and needed a proportionately high amount of hay, but this year we won't need nearly as much. In fact we have several tons of leftover hay in the barn -- it will be fine for another year of feeding -- and just wanted to supplement our supply with another three tons or so. Our neighbor, who was engaged in hauling hay for his own animals, agreed to haul three extra tons for us as well.

He pulled in yesterday with his gooseneck trailer loaded up. This fellow is a former long-haul trucker and we have never, but never, seen anyone more talented in backing trailers and maneuvering huge rigs in tight spaces. 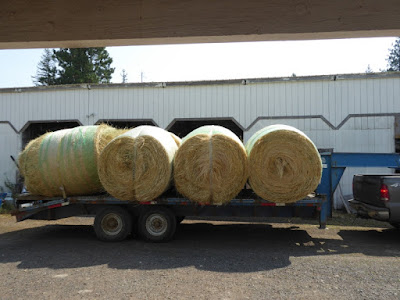 These bales are comparatively lightweight at about 800 lbs. each. Don shoved most of them off the flatbed with the tractor. 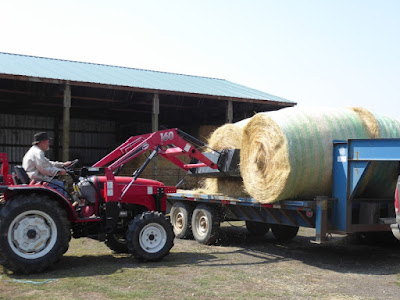 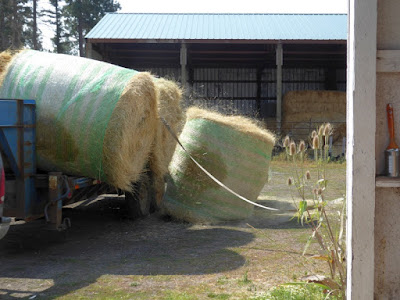 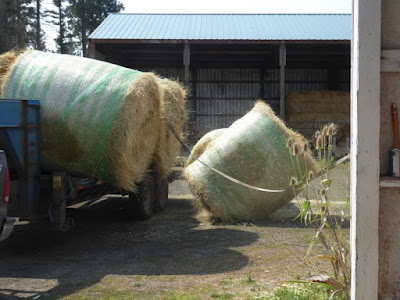 The last few bales were too far over for Don to reach with the tractor bucket, so the three of us -- Don, myself, and our neighbor -- climbed onto the flatbed where we heaved-to and rolled the remaining bales onto the ground. 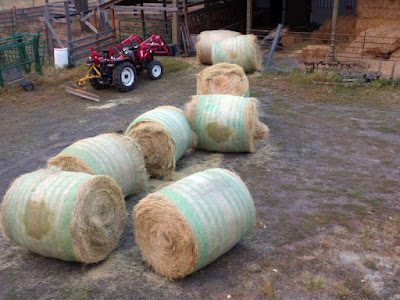 We have some cleanup work to do in the barn before we can put these round bales under cover, but rain is not expected anytime soon so they'll do just fine waiting outside until then.

And meanwhile, it's an awfully nice feeling to have our winter feed taken care of, thanks to our neighbor's help.
Posted by Patrice Lewis at 6:20 AM

Email ThisBlogThis!Share to TwitterShare to FacebookShare to Pinterest
Labels: hay