Ever since losing our Jersey cow Polly, as you know, we've been using Amy as a nurse cow to feed Polly's orphaned calf Anna. We kept Anna and Amy's calf Trooper in the corral, and twice a day we brought Amy inside to nurse them (the morning nursing was just a matter of releasing the calves from an inside pen). 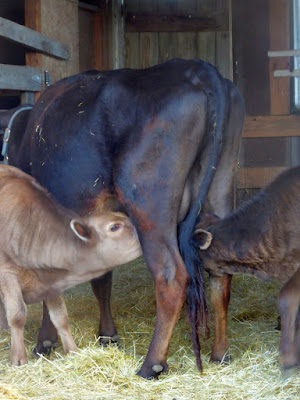 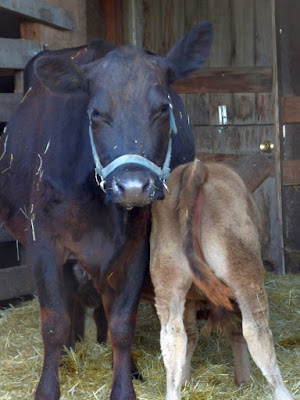 Well let me tell you, Amy hated acting as a nurse cow. (Notice her eyes slit into malevolent loathing for the task at hand in the above photo.) She would barely tolerate Anna nursing when her own calf was nursing, and often not even then. She was sulky, she was grumpy, she was disgruntled. Singing to her helped a bit, but it sure didn't help when it came time to fetch Amy up from the woods or field and bring her into the corral. No amount of cajoling, no amount of singing, no amount of grain worked to entice her to return to a hated task. Fetching Amy became a two-person job: I would haul on her lead rope, and Don would follow up from behind to whack her on the backside if she balked.

Then Amy developed a simple and effective new strategy: whenever she saw me coming with the lead rope, she would just walk away. Sometimes she would trot away, or run away. In all instances, the operative word was away. Believe me, you cannot catch a cow that doesn't want to be caught.

So we tried confining her to the feedlot, but somehow she managed to escape (don't ask me how). Bottom line, it was sucking up more and more of our time, energy, creativity, and patience to keep using Amy as a nurse cow. There is also the very real chance of making Amy hate our guts, which would be a shame since she's Matilda's calf and has the potential to be a very good milker. The one thing we didn't want to do was utterly ruin Amy's formerly sweet disposition.

So a few days ago we decided Anna was old enough to spring from the corral. She's a canny little lass, and hopefully would be able to sneak drinks of milk from other less-hostile cows.

So one morning after having Amy nurse the calves, we opened the gate to let Amy out -- and just left it open. Trooper followed his mama without a moment's hesitation. 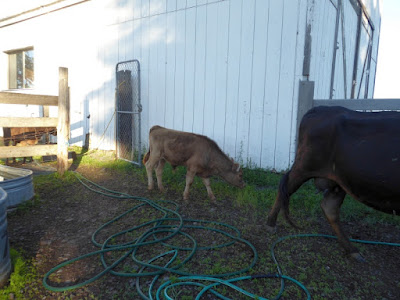 Anna didn't hesitate either, but she sure as heck wasn't gonna follow Amy -- not if she could help it! Instead she paused and started crunching on grasses. (To those concerned the calves' stomachs couldn't handle so much fresh grass after weeks in the corral, no worries; the corral had enough greenery in it they wouldn't have a dietary shock.) 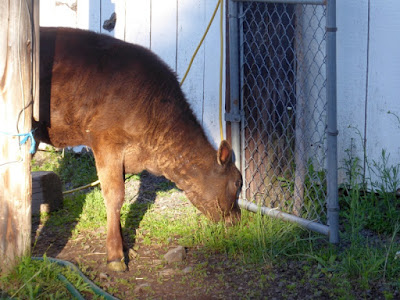 Trooper followed Amy toward the rest of the herd... 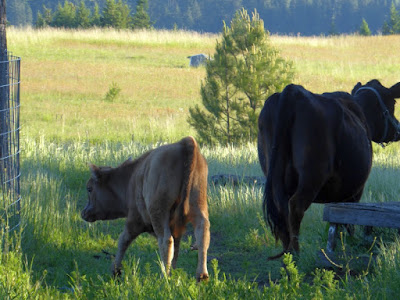 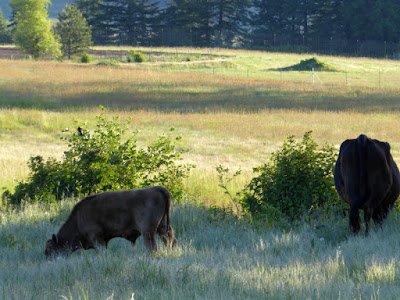 ...while Anna continued cropping the grass right by the gate. 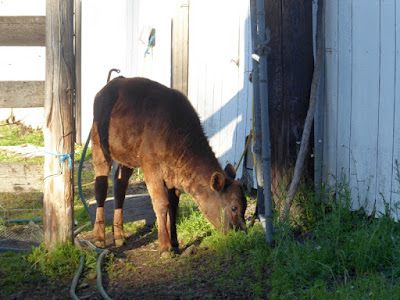 When Anna finally raised her head, everyone had disappeared. 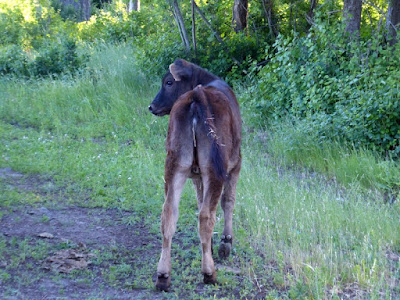 But soon enough her wanderings brought her into the midst of the other animals. I followed because I wanted to make sure no one picked on the orphan.

At first, Anna and Trooper stayed together. 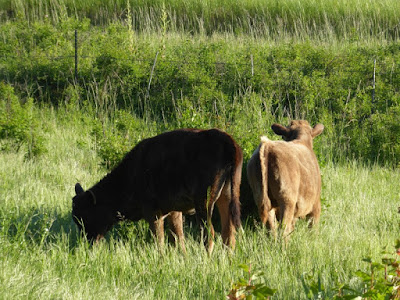 But soon the other calves came over to greet them... 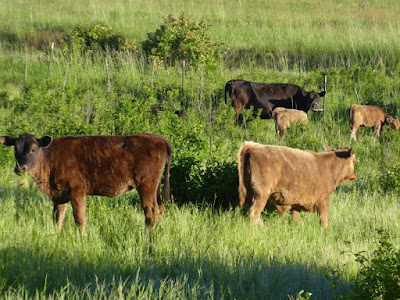 ...and in no time, all the calves were dashing around having fun. 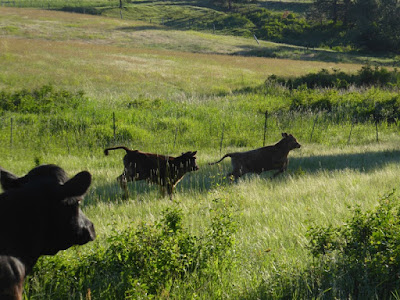 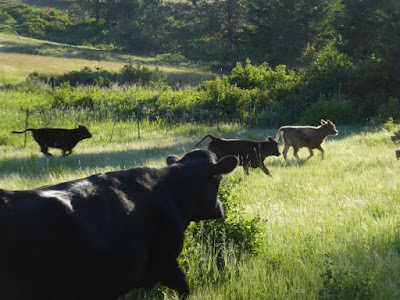 And that's when I left them.

We kept a distant eye on Anna as the day progressed. In the early afternoon, she was curled up next to Trooper amidst the rest of the herd, looking relaxed in the shade of the barn awning. So far so good. 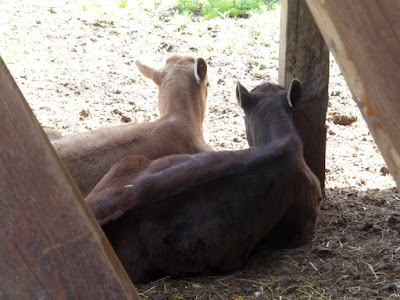 Amy also looked more relaxed and was able to groom her calf Trooper without the little brat interfering. 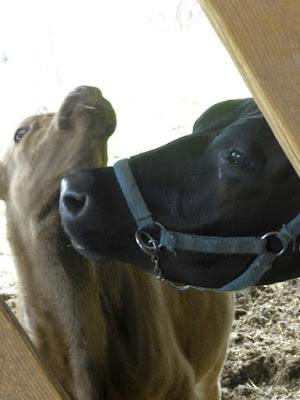 As the days went by, I noticed Anna seemed to have an affinity toward Victoria, a motherly older cow with a sweet disposition. Good. 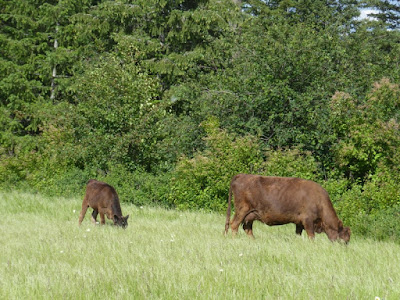 And then we started seeing solid evidence: Anna, always angled in the back and always waiting until a cow's calf was already nursing, busy filling her belly. Told you she was a canny lass. 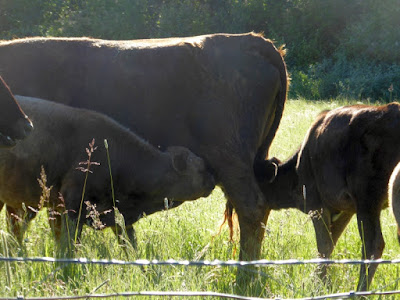 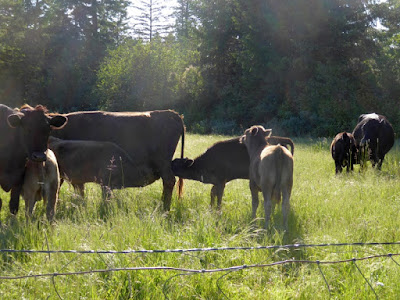 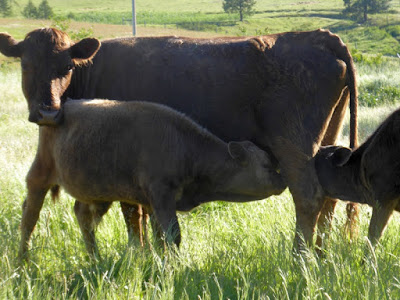 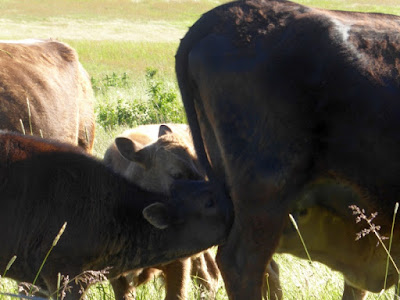 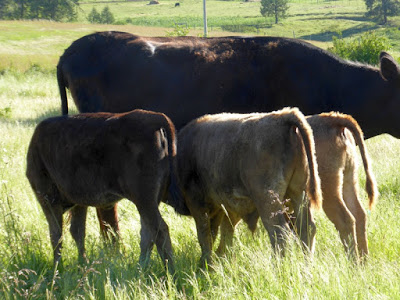 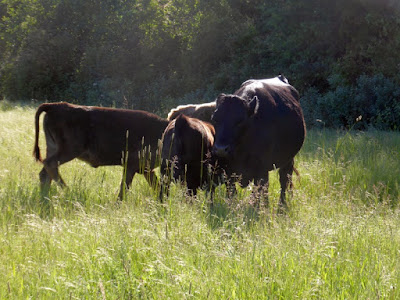 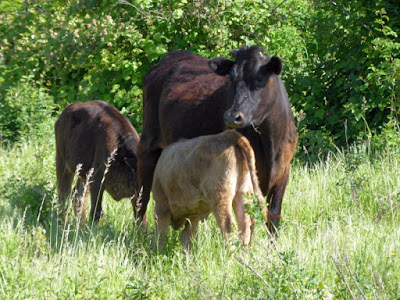 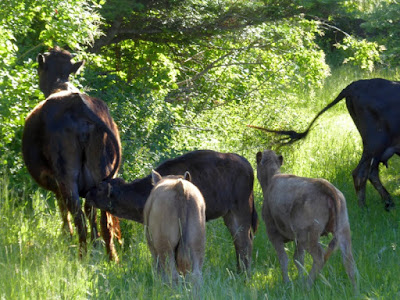 In fact, she's getting better fed now than she ever was with just Amy. She has a veritable smorgasbord of choices before her! Three fairly tolerant cows (Pixie, her older sister; Victoria; and Sparky) who (mostly) don't mind a little double-dipping.

So despite the crushing loss of Polly, it looks like Anna will grow up nice and healthy. As an added bonus from her weeks in the corral, she's quite friendly toward us, and someday may turn into just as good a milker as her mama.
Posted by Patrice Lewis at 3:15 PM