Well, it looks like the sun has set on another winter. 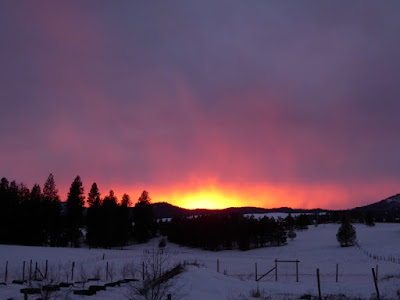 Suddenly the temps are well above freezing during the day, and the snow is melting rapidly. Bodies of water are losing their grip of ice. 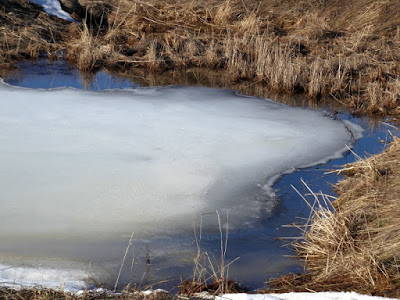 Everywhere we go, we hear the chatter of running water. 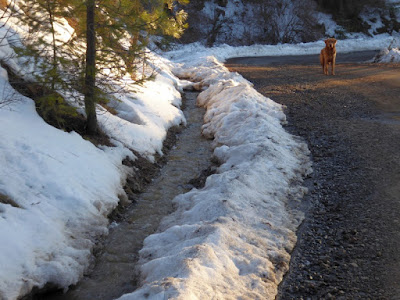 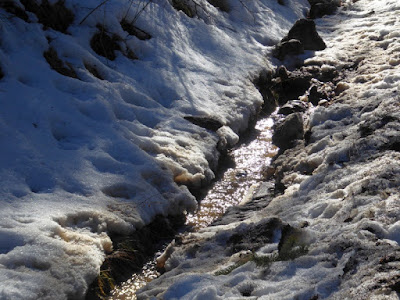 Sometimes it's more than chatter. Across the canyon, I heard the distant thundering of an ephemeral creek. 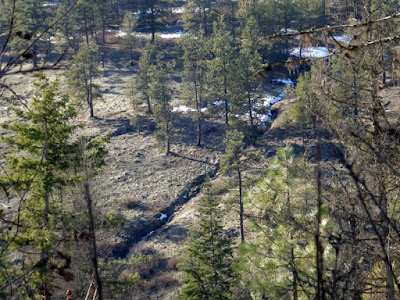 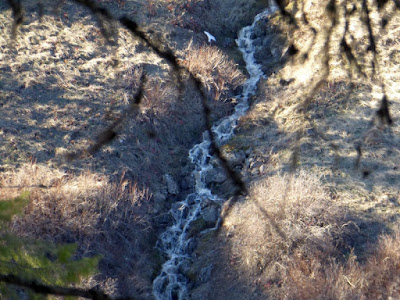 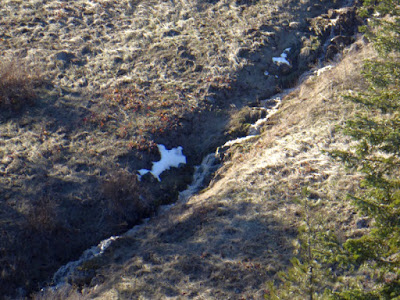 Yesterday afternoon, I just missed taking a photo of our neighbors riding horses along the road. Both these fine people have faced frightening health challenges in the last year, and to see them enjoying the simple pleasure of a horseback ride on an early spring afternoon was a welcome sight indeed. I captured evidence of their horses' passing. 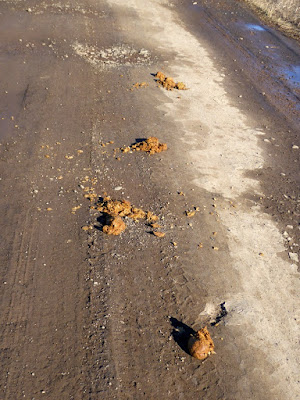 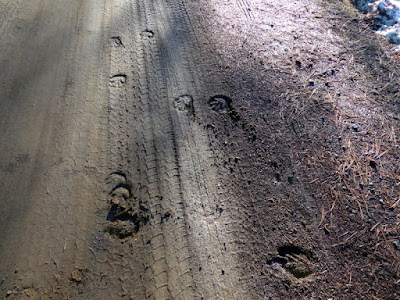 Suddenly we're dripping with birds: red-winged blackbirds, robins, kildeer, meadowlarks, and of course swans flying over us toward the lake. 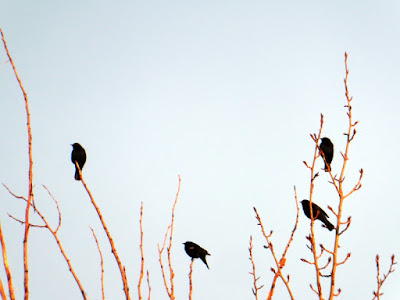 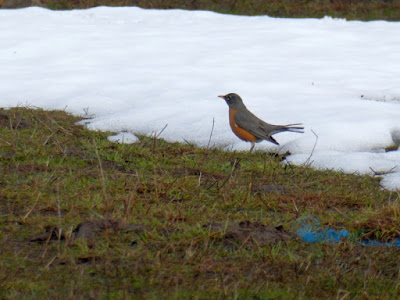 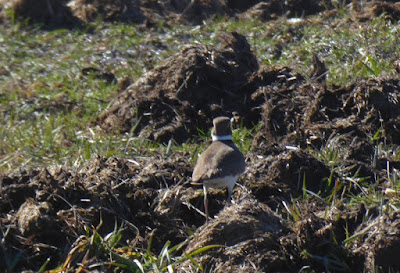 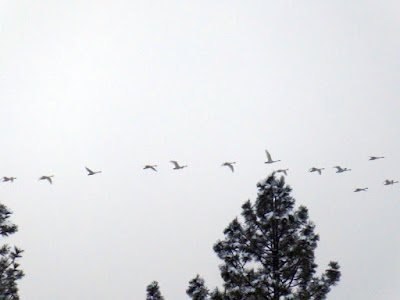 Everything is white and brown, blue and green as the snow recedes. 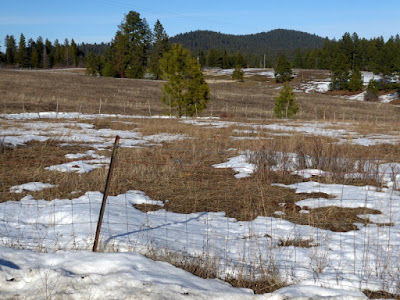 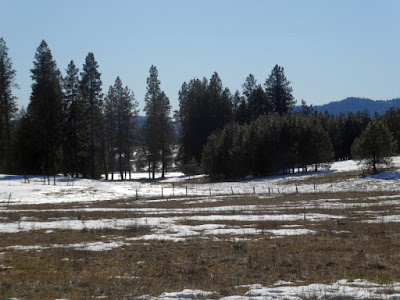 With this increased pulse of life, of course, we now find ourselves looking for any excuse to get outside. Taking Mr. Darcy for walks is one of those excuses of which he highly approves. 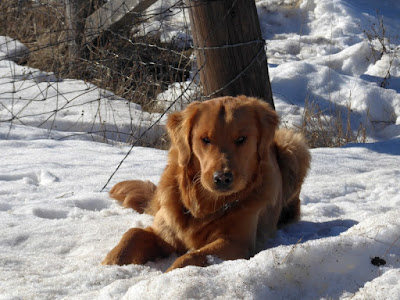 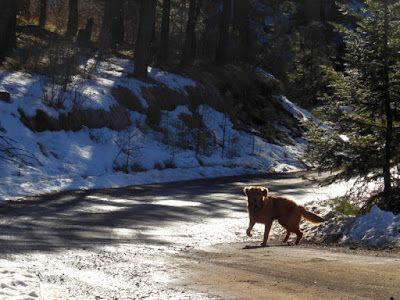 We dehorned little Anna, who was understandably not amused by the duct-tape helmet. We kept both mama and baby in the barn during this time. 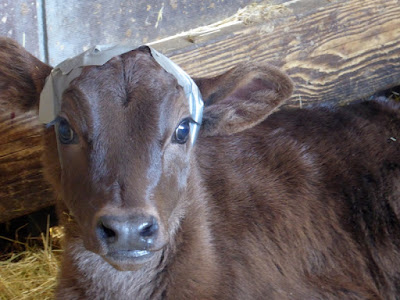 Later, when we could finally clip off the duct tape, Polly and Anna stepped back out into the welcoming sunshine. 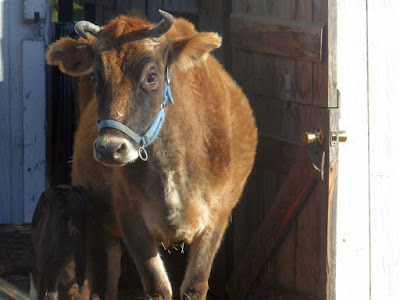 Meanwhile the rest of the cows and calves lounged in the warmth. 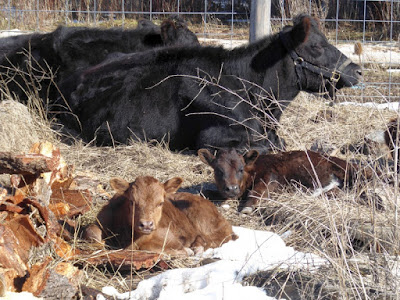 I decided to investigate the garden, much of which is still under snow. Here's the blueberry bed: 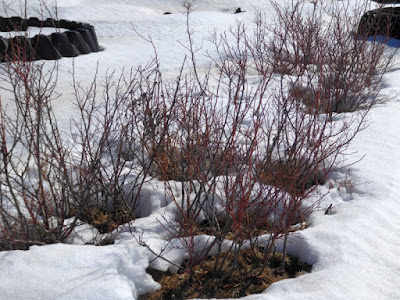 Some of the strawberry tires, with the garlic boat in the background: 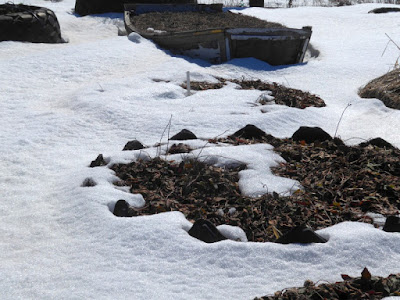 I walked into the orchard and was distressed to see our young Gala apple tree on its side. 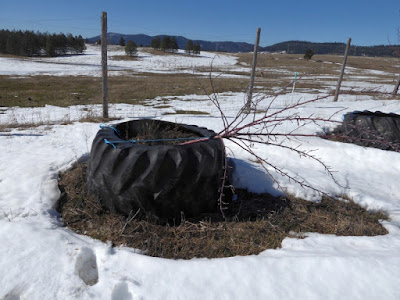 It must have just happened -- new buds were still looking healthy -- and probably occurred during a windy blast a couple of days before. 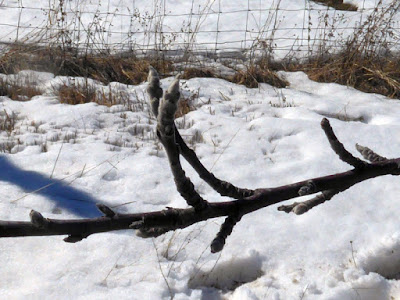 At least its roots were still (mostly) in the soil. I straightened the tree and re-staked it from four directions. I don't know if it will survive, so we'll see. 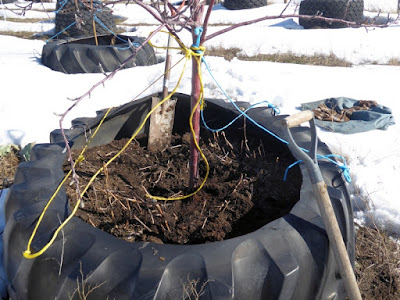 The rest of the orchard looked to be in roaring good health, so that's a relief.

I'm getting the itch to plant something, but it's too early even to start seeds in the house (since we couldn't transplant until late May or early June), so I'll try to be patient. But with spring in the air, it's hard going.
Posted by Patrice Lewis at 7:48 AM