Question from a reader:

I've been wanting to buy some Jersey Giant chickens for a while now. When I saw you got them I was thrilled. Could you tell me how they are doing? How do they deal with Idaho winters, their temper, how many eggs. Are they overall a healthy chicken? Would love some feedback on that. Thanks!

We've Jersey Giants for almost three years now. So far we've been very satisfied with them as a breed. 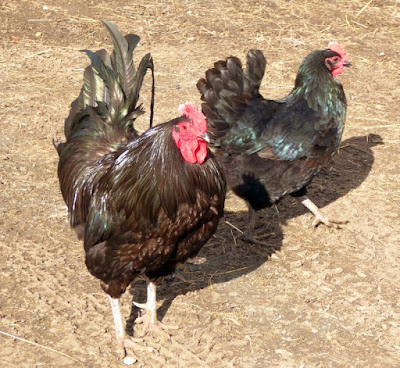 The females aren't especially large -- the same size as our one Black Australorp hen -- but the roosters are very big. At the moment we have way too many roosters -- five -- two of whom are our "herd sires" and the other three of whom we're waiting to reach their full size to butcher. We haven't butchered any of our own birds yet, but these boys look like they'll dress out at about ten pounds or a bit under. Jersey Giants take about nine months to reach their full growth, but unlike the fast-growing Cornish Crosses, they stay healthy instead of having their bodies fall apart. 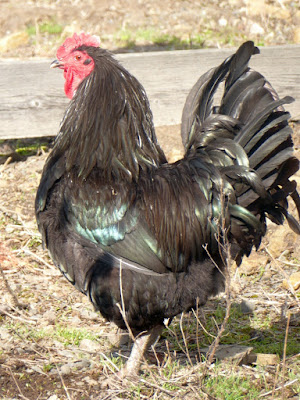 We have not found the roosters to be at all aggressive to people; which, considering their size, is a durn good thing. The roosters tend to fight with each other, so one of our future projects is a rooster house where we can raise young roosters away from the older boys (and the hens) until they're of butchering weight.

The hens lay brown eggs, sometimes faintly speckled, of regular size (not especially big). They're just as good layers as any other breed of hen we've ever had. 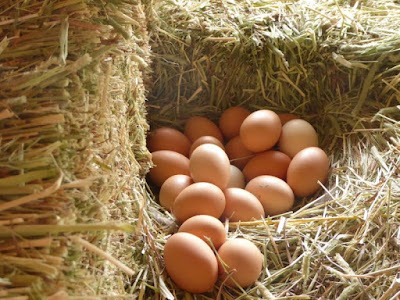 One advantage of the ladies is they go broody at the drop of a hat, which is why I've taken to calling Jersey Giants the triple-purpose breed: meat, eggs, broodiness. Having hens so willing to hatch and rear their own chicks is a great contributor toward a sustainable chicken venture, IMHO. 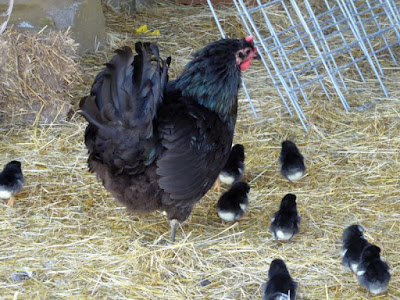 While this winter has been fairly mild so far, last winter was quite bad: Lots of snow, lots of cold. The chicken coop is not heated, and the birds all did fine.

They're a healthy breed and we haven't noticed any problems with how they grow or mature. Overall I've been quite pleased with Jersey Giants, and I'm sure we'll be even more so when we get into full meat production (hopefully this year).
Posted by Patrice Lewis at 7:19 AM