Yesterday -- a rare sunny day -- I mixed up some sugar syrup and went out to check the bees.

I thought I had put up a blog post earlier about our new bee yard, but I guess I hadn't; so here's a bit of catching up.

A few weeks ago, we knew we had to get the hive out of our barn, where we had tucked it for the winter. 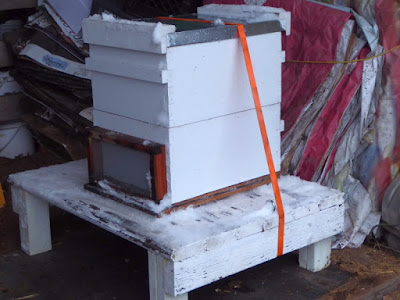 Last summer we had the hive in the garden on the other side of the pond. The only problem with that location is we couldn't keep an hourly watch on the bees; so when yellow jackets started viciously attacking, it was some time before we noticed the war. The wasps devastated one hive and severely injured the other. In desperation, we moved the one remaining hive in the middle of the night to a new location next to our log pile in the driveway, in clear view of the house. The location worked so well (we walk past the hive all the time) we decided to make the location permanent.

However we needed to protect it from the cows, since once in awhile we let animals loose in the driveway. So a couple weeks ago, Don set some poles in a corner of the pasture... 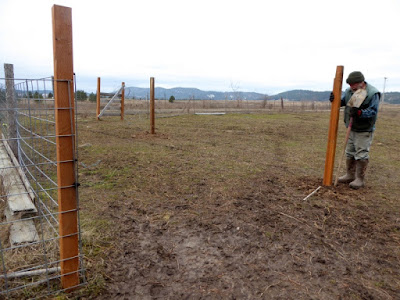 ...and we set up some cattle panels (some people call them hog panels) to make an enclosure. 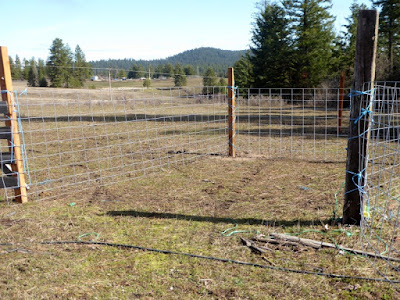 Then, so the cattle wouldn't be tempted to push the panels from the bottom in an attempt to get at grass (which, as you know, is always greener on the other side), we moved two heavy railroad ties... 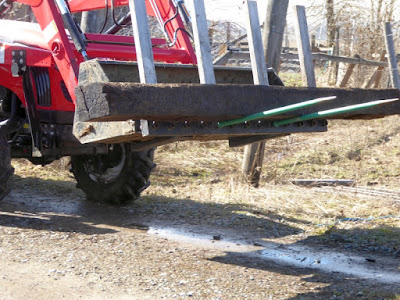 ...and used them to brace the panels at the bottom so they can't be pushed. 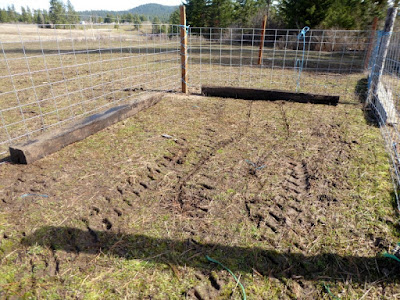 Don also hung up and baited about ten yellow-jacket traps in a wide circle around the bee yard in an effort to catch any early queens. 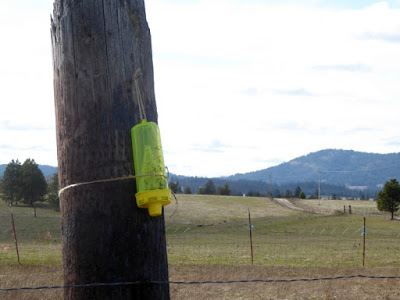 Moving day was chilly enough that the bees were not yet out and about, so we closed the lid, plugged the wasp guard opening with a cotton ball... 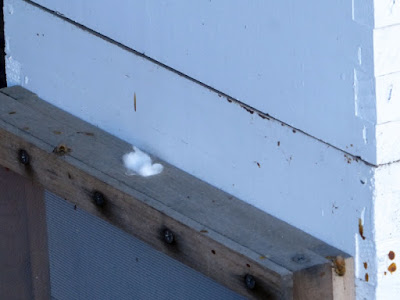 ...and strapped the hive to its base. Then we used the tractor to move the hive to the new bee yard. 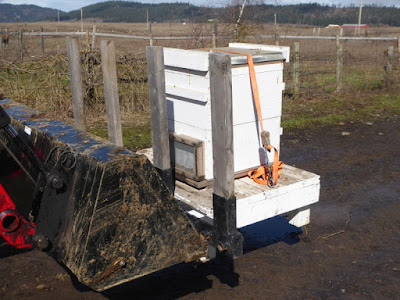 The yard is spacious enough to accommodate the new incomes nucs which should arrive sometime within the next few weeks. 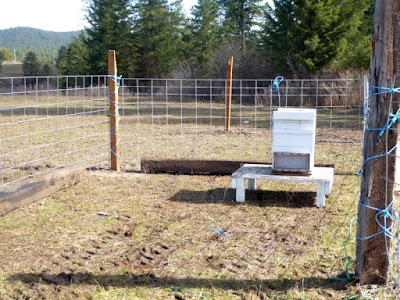 Anyway, as the weather reluctantly warms up, the bees can sometimes be seen outside their hive. 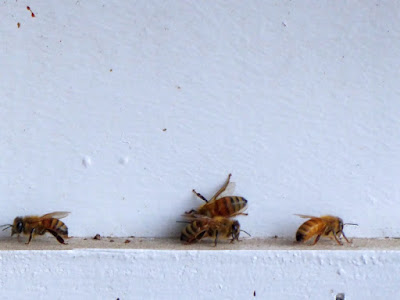 But because of the wet chilly spring we're having, we went to make sure the girls have enough to eat. So yesterday I mixed up a batch of sugar syrup and went out to fill the feeders. 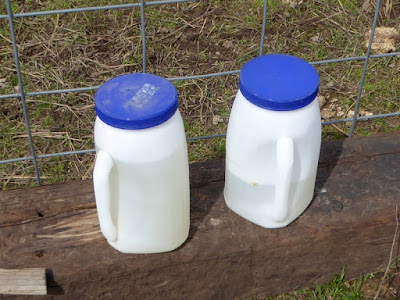 The first thing I discovered is the syrup was entirely unneeded. There was lots of activity at the feeders, but both feeders were still mostly full, meaning the bees are finding enough to eat on their own (or using their own honey stores). A good sign. 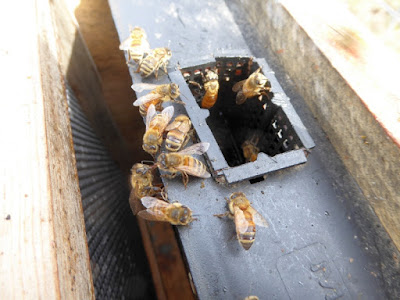 There was also lots of housecleaning going on. One lady (upper left) was struggling to drag the carcass of a dead sister outside the hive. 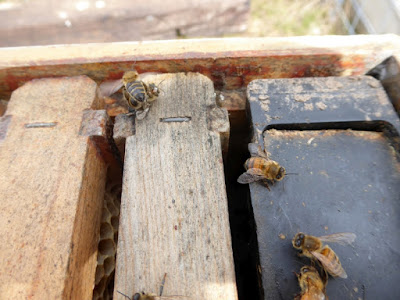 Lots of activity everywhere I looked, though these photos were taken in the relatively sparse upper frames. 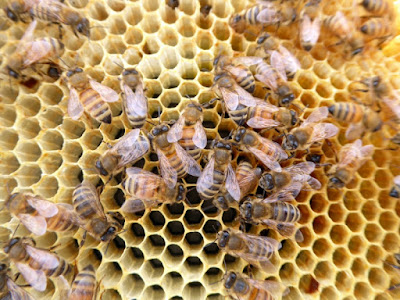 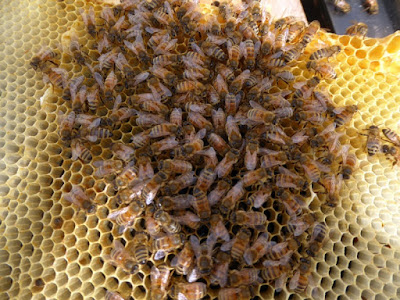 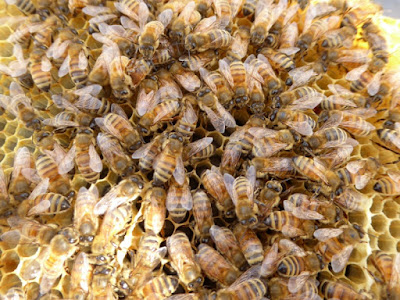 But most of the activity was taking place lower down, nearer the queen. I was tempted to disassemble the hive and look for the queen, but decided such an invasion wasn't necessary. Clearly she's doing her job. 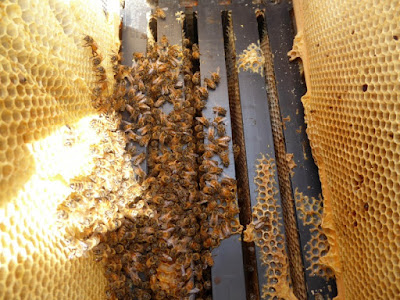 What pleased me immeasurably is the sight of many bees with full pollen baskets. 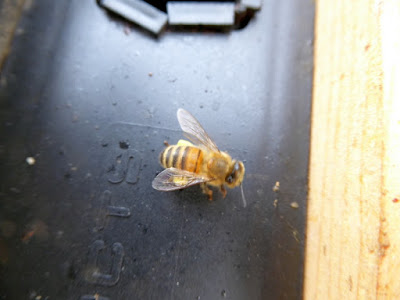 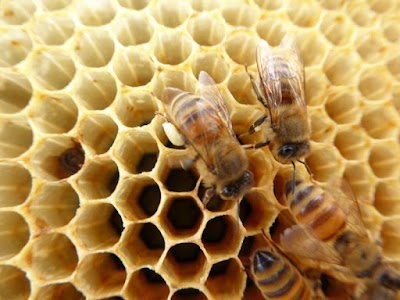 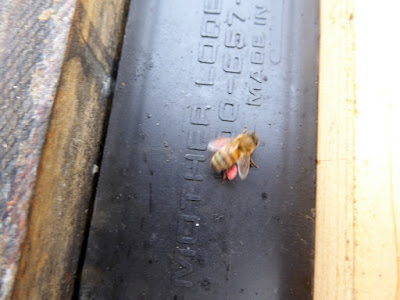 Then the question arose, where is the pollen coming from? Pickins' are still pretty slim this time of year, which is why we felt the bees still needed feeding. 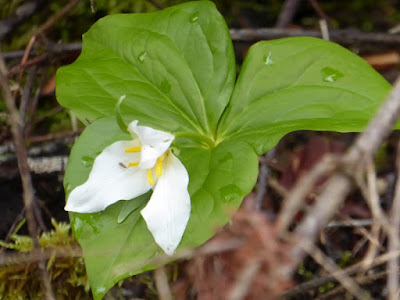 Here are buttercups and avalanche lilies: 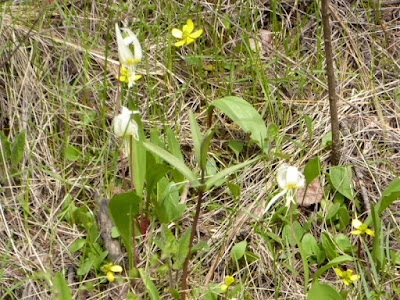