As many of you know, I'm an early bird. It's not unusual for me to be up and around by 3:30 am. It's just the way my internal clock ticks. (Just don't ask me to stay awake past 9 pm, however.)

A couple weeks ago, I was doing some work at my computer during the dark wee hours of pre-dawn when I heard a ruckus among the chickens. I grabbed a flashlight and dashed outside.

I should explain the poor chickens haven't had a chance to set foot outside in weeks because of the snow dump we've had this winter. We have multiple roosters who would fight if confined together, so some birds have chosen to spend the winter in one of the stalls adjacent to the coop. Since they're reasonably protected, and since a coyote would have to go through two fences, the corral, into the barn, and past two cows to get to the chickens, I never gave the situation much thought.

But several of the more wily hens preferred roosting in another less-protected part of the barn -- and it was among these hens that I heard the commotion. I made my way into the pen, fully expecting to catch a coyote in the act. Instead I saw -- a great horned owl. 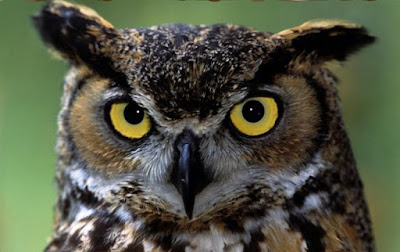 Great horned owls are silent and powerful predators. Take a look at their talons from this stock photo: 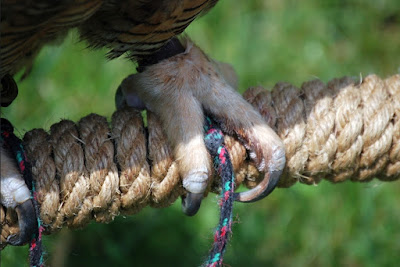 Additionally, this attack came about two weeks after a neighbor lost a goose -- a goose! -- to a great horned owl. The neighbor literally caught the owl in the act of ripping open the goose's neck (he actually got a photo of the culprit; if he sends me a copy I'll post it here).

Now, I'm an owl person. A serious owl-lover. I spent many years working as a field biologist surveying owls. I love 'em to pieces -- but NOT when they're killing our chickens, which this one assuredly was doing.

The poor hen lying at its feet was flopping in her death throes. Seeing me, the owl took off, brushing past my ear as it made its way out of the barn.

I picked up the hen. Her head lolled down, she was unconscious, and she wheezed and gurgled. I figured I'd put her in the washroom in the house to die in peace. I put a rag on top some laundry in a basket and bedded her down.

Then I went back outside to search for any stray hens. The owl was already back in the barn, but flew off when he saw me. I located a hen and put her inside the chicken coop, searched around for any others that I might have missed, and went back indoors.

Half an hour later, I heard more telltale squawking. Repeat story: grabbed a flashlight, dashed outside, caught the owl in the act. Evidently I had missed a hen in the dark (black hens in a black barn are hard to see), and this lady was convulsing and dying at the owl's feet. "Get the [insert really really bad expletive I would never utter under normal conditions] out of here!" I shouted. The owl took off.

The hen was doomed. I put a crate over her so she could die in peace, did a more thorough exam to see if I missed any more hens, and went back inside.

When Don woke up, I related the morning's adventures while berating myself for leaving the girls vulnerable to this phantom menace. "I put one of the hens in the washroom to die," I said, opening the washroom door to show him...

The hen looked over the top of the laundry basket at me. She was fine. Whoa. 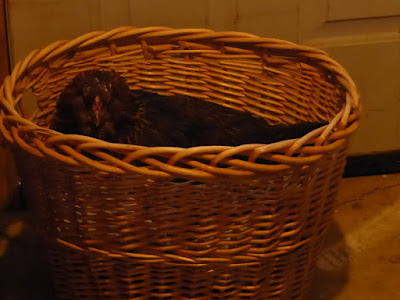 This lady was in such bad shape when I picked her up that I couldn't believe she'd made it. Relieved, I carried her outside and tucked her into one of the inner cages of the chicken coop with some young birds. Just in case she had any residual weakness or injury, I didn't want the older birds picking on her.

Then I went into the barn to fetch the body of the dead hen. Some other chickens were standing around the crate I'd placed over the dying bird... 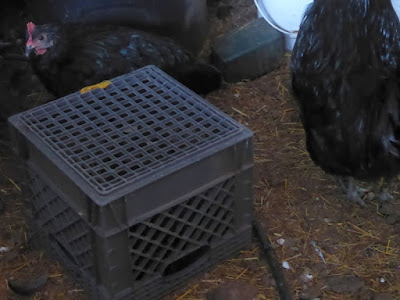 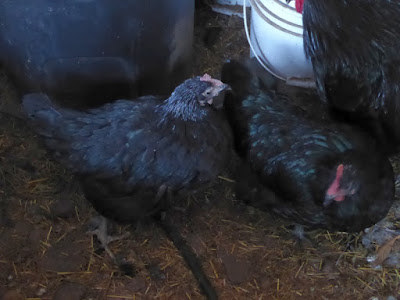 She was battered, bruised, and dazed, and had lost a lot of feathers -- but she was alive. She was also limping, so I tucked her into the same inner cage as the other hen to either recover or die. She recovered. (These are some tough hens!)

Clearly we couldn't risk leaving the chickens unprotected in the open barn anymore. But nor could we tuck the competing roosters in the same coop without any means of escape (deep snow, remember). But in looking over the pen where the "alternate" flock has been spending the winter, I realized all we had to do was block the gate from letting owls fly through, and the chickens should be fine. 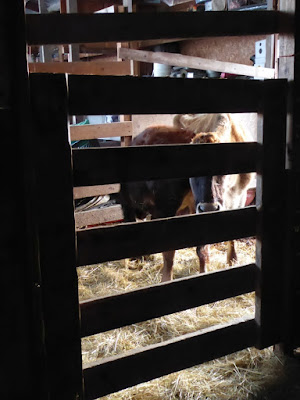 So I sacrificed one of our bed sheets and attached grommets at one end to cover the gate. Here Lydia is offering some canine assistance as I measure. 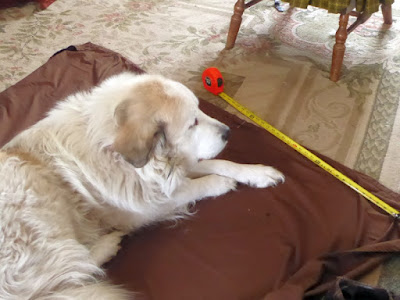 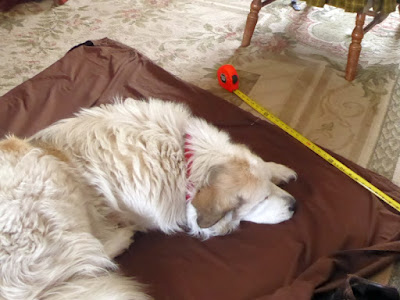 I hung the sheet from some hooks across the barn gate. 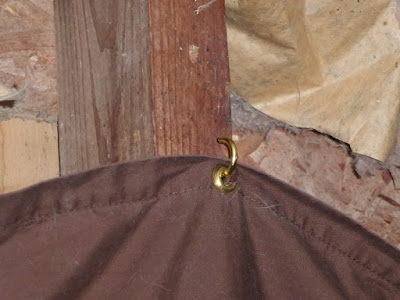 The result looks tacky, but it seems to be doing the trick. No owls have disturbed the birds in the past two weeks. 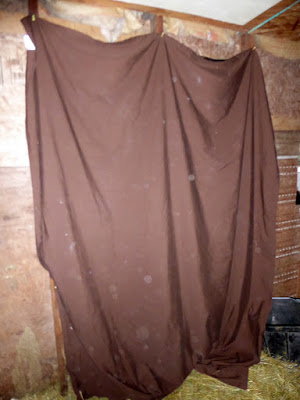 So now our new nightly routine is to pick up the one hen who persists in roosting each evening in the unprotected part of the barn, tucking her inside the pen, then hanging the sheet across the doorway.

Once the snow eases up and we can get some outdoor work done, we will be completely reconfiguring the chicken coop to accommodate competing roosters. Meanwhile, needs must when the devil drives, as the old saying goes.
Posted by Patrice Lewis at 8:58 AM