The importance of wish lists

I just finished and submitted a magazine article examining whether or not you should go into debt in order to become prepared (short answer: no). (The notable exception is a rural retreat and an affordable 15-year mortgage.) 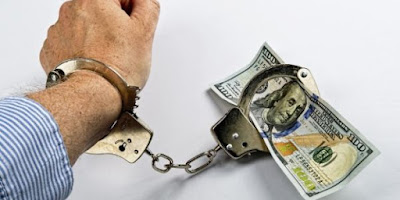 During the course of the article, I touched on something Don and I have found extraordinarily useful over the years when it came to setting and achieving goals for our homestead: the power of wish lists.

Wish lists are wonderful because they’re free and the sky’s the limit. Big or small, when you think of something you feel would be useful as a prepper, just add it to the list. Want a rural retreat? Put it on the list. A 1600-lumens flashlight? On the list. A milk cow? On the list.

This kind of list is surprisingly useful for setting goals. When we first moved to Idaho and thought about the many, many projects we wanted to do or things we wanted to purchase, we got overwhelmed. So what we did was to make an extensive list of everything we wanted to do, build, learn, or buy. We spent many days adding to this list, and it was huge. It didn't matter how absurd or how expensive it was; lists are free (and fun!). Items included both short-term and long-term wishes.

Then we divided that list into the As, the Bs, and the Cs. The A category had the highest priority, the C had the lowest. Here's a brief sample: 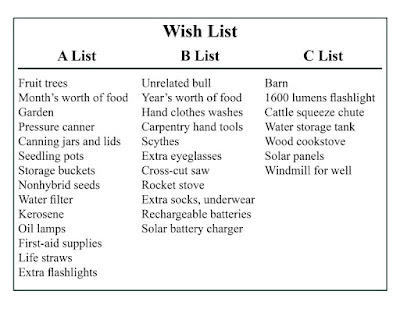 As you can see, our short-term list included things that were relatively inexpensive and could be done right away, such as stocking up on nonhybrid seeds. We put fruit trees on the A list since they would take awhile to mature. (In fact, we planted fruit trees -- twice -- shortly after moving to Idaho but they all died except for two pears.) Our C list included more expensive things such as the barn, or things that are low priority such as the 1600 lumens flashlight. Needless to say our early wish list was much longer than this, but this gives you some idea of how we organized it.

This wish list doesn’t just have to be things you want to buy. You can make a separate list for skills you want to acquire or projects you want to complete. Want to sew/weld/milk a cow/fix an engine/ knit socks/fence a garden/get chickens? Put it on the list, and be sure to include what tools or materials you’ll need to accomplish the task; then prioritize these in order of importance or do-ability. By having things laid out like this, you can examine your budget and prioritize the things you want to accomplish. Let your imagination soar. Here’s an example: 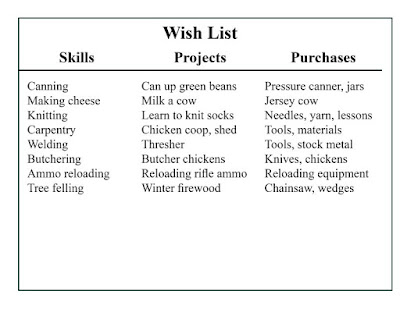 We were astonished how much this list helped us through the years. If we had a bit of extra money, we looked at the “A” list to see what we might be able to check off. When the A’s were nearly gone, we looked more attentively at the “B” list, while saving up for some items on the “C” list. The list was fluid; sometimes we would add things, or shift an item to a different category, or drop it as unnecessary. This master list allowed us to accomplish a great deal on our homestead over the years, and only two things required going into debt: building the barn, and buying the tractor (both of which are now paid off).

Sometimes at the end of the year, when either a lack of time or a lack of money meant we hardly accomplished anything, it helps to ask ourselves, "Did we move forward? Did we make progress?" Even if we've hardly tackled the list at all, if we can answer "Yes" to those questions, then we've done okay. Homesteading and self-sufficiency are achieved through incremental steps which add up.

I strongly urge you to do something similar with your prepping efforts. When you make the initial list, the sky’s the limit. Let your imagination soar. List a 40-acre rural homestead, if you want. Remember, lists are free! Then you can prioritize your lists into categories, in accordance with your time and income.
Posted by Patrice Lewis at 1:20 PM