We've had some grim moments this week.

A few days ago, Don shot our barn cat. This little lady adopted us shortly after we arrived in Idaho 13 years ago. At the time, she was presumably a young cat but of an unknown age, and for all these years she was Don's faithful companion in the shop. He's doctored her for a few things over the years, but advancing age and a lack of teeth meant it was almost impossible for her to get any nutrition, no matter how much Don tried to alter the consistency, presentation, and variety of food. Essentially she was starving.

When I suggested we take her into the vet to have her put down, he disagreed. She's lived virtually her whole life on the farm. To suddenly get bundled into a box and driven somewhere strange would be more traumatic than to take care of the matter himself. As he put it, sometimes it's the kindest thing you can do for an old friend. Choosing the right moment when the cat didn't see it coming, he put her out of her misery. Then he came back inside and wrapped me in a hug for a long, long time.

Then yesterday, our new neighbors (who inherited two horses with the property) called in alarm, asking which vet we could recommend. They were concerned one of the horses had a broken leg. Don first called another neighbor D., who is a horse expert. While waiting for D. to arrive, we walked over and looked at the horse, who was right at our fence line.

It was unmistakable. This beautiful animal clearly had a horribly broken right foreleg. She stood trembling and breathing heavily in her pain. No one saw how she had attained such an injury, but a horse with a broken leg is pretty hopeless.

When D. came over, he had a .45 strapped to his hip. He and Don went over to the neighbor's pasture and consulted with them, then gave the horse a fast checkup and confirmed she had broken her leg in three places. Calling a vet wasn't necessary.

D. haltered the other (healthy) horse and put her in the barn (out of sight). Then he asked the grieving neighbors to go into their house. Don stayed with D. because, as he told me later, he wanted to see how putting down a large animal humanely was done.

I came into the house and told Younger Daughter not to be surprised when she heard a gunshot, which came within minutes. 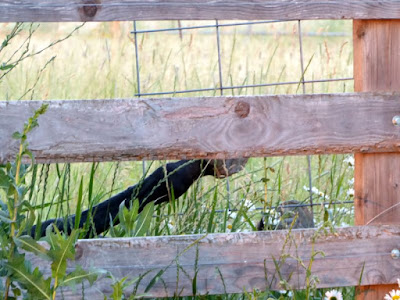 Meanwhile I called around until I found someone with a backhoe to dig a hole sufficiently large to bury the horse.

No need to call a vet in hopeless circumstances, especially when there are good men like Don and D. who unshirkingly do what must be done.
Posted by Patrice Lewis at 6:12 AM