There's something about the increasingly nice weather that pushes us outside to tackle projects and chores that have been stacking up. One such project was setting fire to a burn pile. 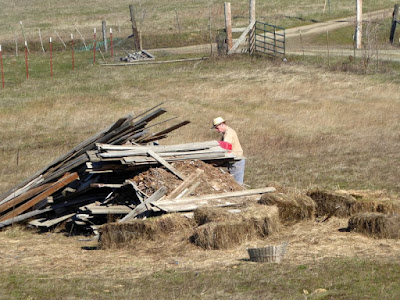 This pile was an agglomeration of burnable waste from the last year or so -- boards too ratty to use, old rotten hay bales, shop waste, even an old wicker laundry basket. We needed to time the burn so the materials were fairly dry, but the surrounding ground was still wet enough the fire wouldn't spread. We also (duh!) chose a calm day, which can be tricky as wind is common around here.

Don poured some diesel around the pile, and lit a match. 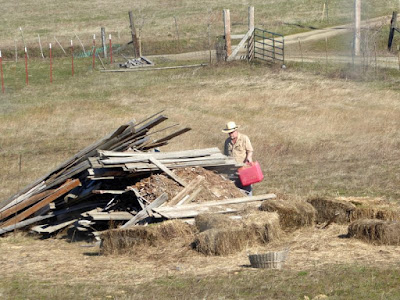 In no time at all, flames were roaring. 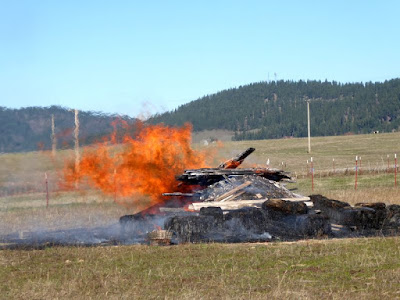 Within a few hours, the burn pile was reduced to a pile of ashes, with the exception of the rotten hay bales, which were still too wet to properly catch fire. (No biggee, they can be composted.) 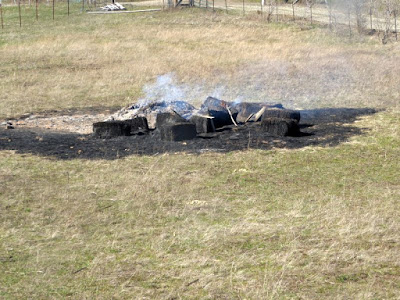 The next morning, things were still smouldering. 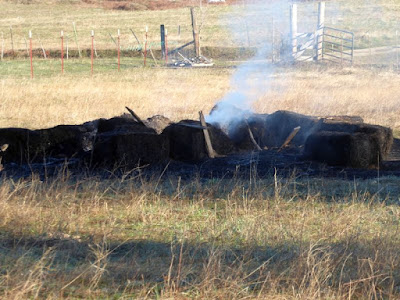 While the fire burned, Don worked hard at cleaning up the adjacent log yard. This is where we stack the pulp logs we purchase by the truck-load, and which we use for firewood. 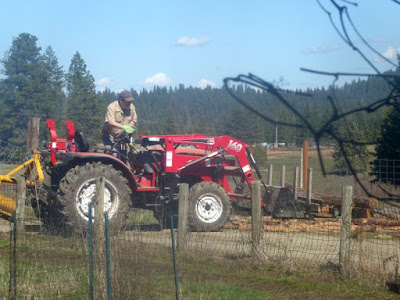 The reason for all this cleanup is we were nearly out of firewood, and had ordered a new truck-load of logs which was arriving shortly. The weather is warming up, but we still use the cookstove in the morning to take the chill off the house. 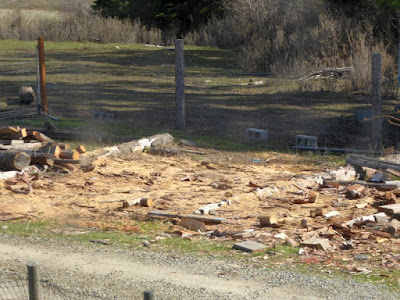 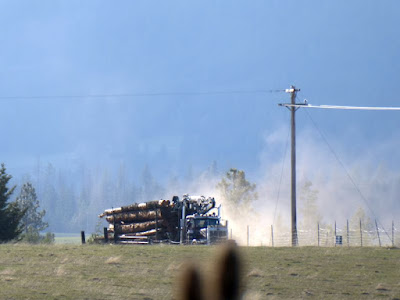 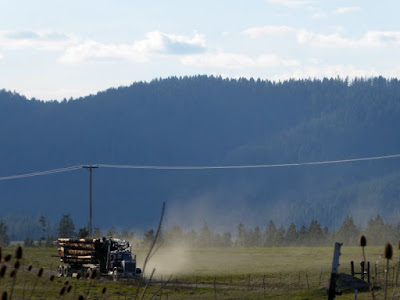 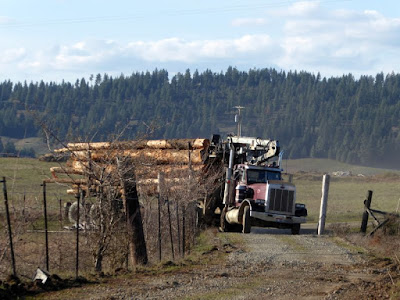 Mike, the affable trucker, parked in front of the log yard and put down the braces to keep the truck from tipping as he offloaded. These logging trucks are absolutely massive, impossible to appreciate until you're close up to one. 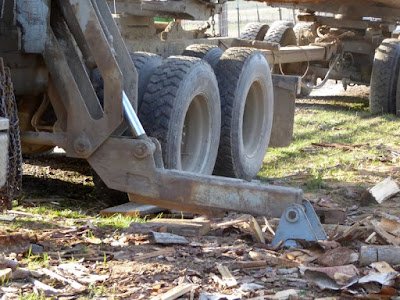 Then he climbed into the seat of the loader and started removing logs. 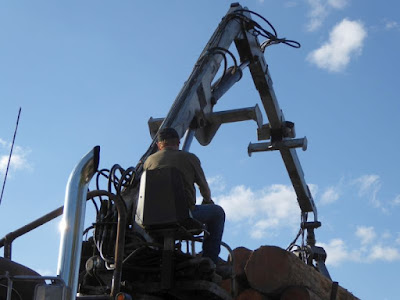 This fellow is a master of controlling the huge arm. He is able to perform amazingly delicate tasks along with the big stuff. 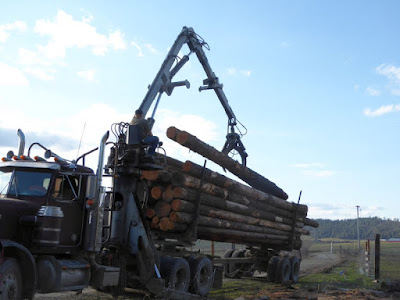 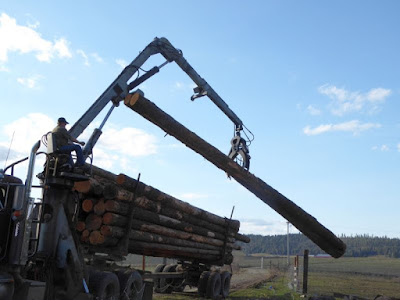 One by one, he stacked the logs. 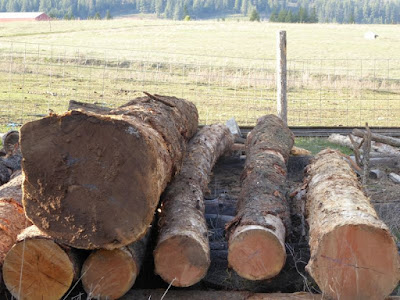 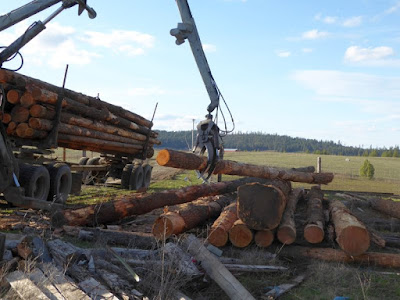 These are logs that are too cracked, warped, rotten, or otherwise unsuitable for cutting into boards. However they're perfect for firewood. The entire load was red fir. 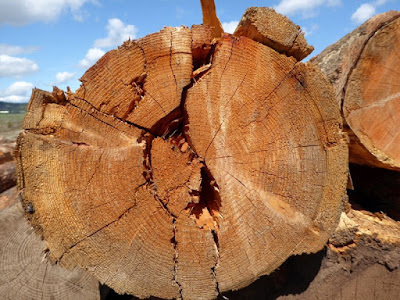 It only took him about half an hour to offload all the logs. Then he lifted the back end of the truck and piggybacked it onto the front end, standard procedure for empty logging trucks. 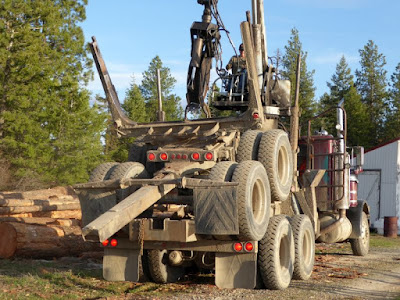 He did a beautiful job of neatly lining up the log ends one side of the yard... 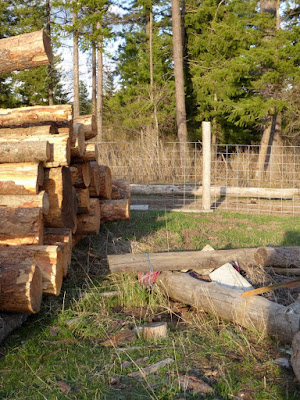 ...which left the jagged ends on the other side. 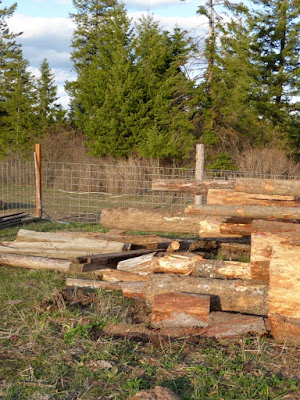 Then he backed himself out of the driveway amidst a flurry of thanks and a pocketful of cash. Great guy, Mike. We've bought logs from him before and he's just the nicest fellow. 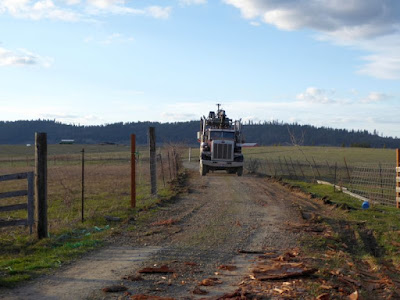 In the past, using our inefficient parlor stove, this amount of firewood would last us about two years. However with our new, much more efficient cookstove, we're hoping to get three or four years' worth of heat from this load. 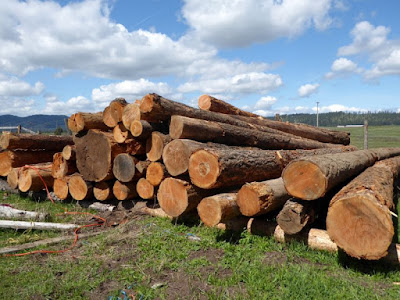 If we can afford it, we may even purchase another truck-load of logs in the fall.

Posted by Patrice Lewis at 6:44 AM