Because we had such a hot dry summer, we had to start feeding the cattle in August of last year, rather than October as usual. This meant we ran out of hay a lot sooner than we otherwise would have.

We got a few more bales a couple months ago, and it turned out to be lousy stuff -- practically blond in color, and if the cows' reactions were anything to go by, not especially tasty either. 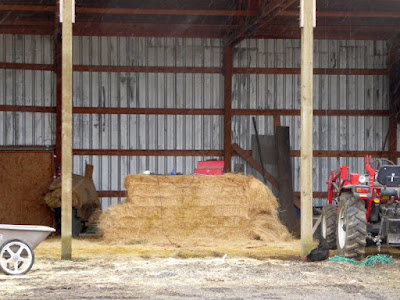 Not wanting to waste it, however, we've been mixing it half-and-half with our remaining good hay, and giving the animals a hay salad. They've accepted this and have been eating everything up, but it's a laborious process to shred and mix the hay twice a day.

But the "good" hay was nearly gone, so this week Don borrowed a trailer from a neighbor and went in search of something better. He came home with two tons of grass hay. (He paid for six and will go back for the other four tons shortly.) 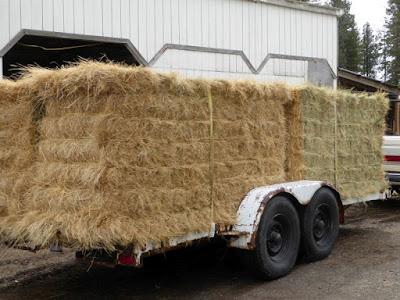 He shoved it into the barn with the tractor. 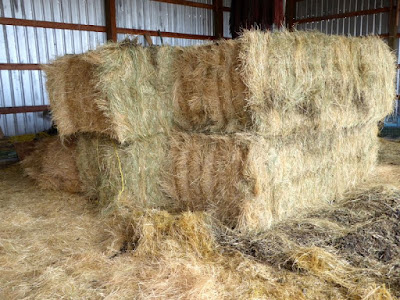 When we broke open a bale, it turned out to be beautiful stuff. The cattle snorted it up like candy. We're still mixing it with the blond hay so we can use it up, but I told Don I wouldn't mind getting another 30 tons of this grass hay and stuffing the barn full. 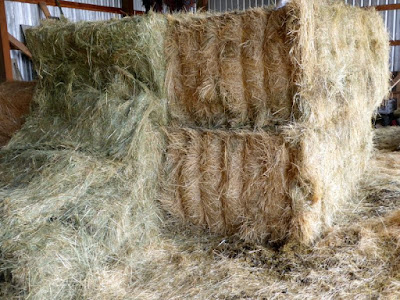 The price this farmer was selling it is right, and the quality is good. If he has more available (he said a good amount of what he had left is spoken for), we can fill our barn now, then round it out in the late summer with this year's crop at what will no doubt be a higher price.
Posted by Patrice Lewis at 8:01 AM