It's the little things in life

Today was beautiful. Bright sunshine, warm temps (it got up to 53F!) -- there was no way I was going to stay in the house. 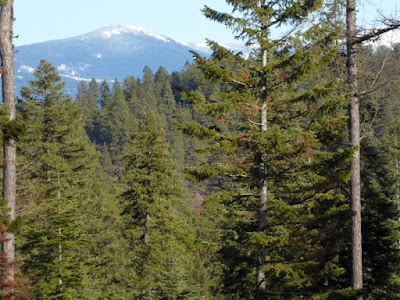 The chickens spread out in the sunshine and soaked up the rays. 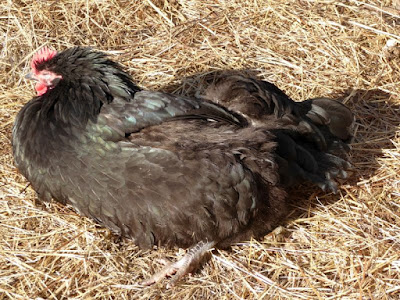 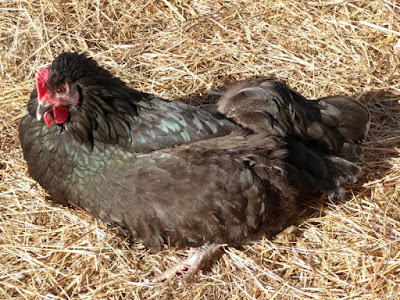 As did the cows. 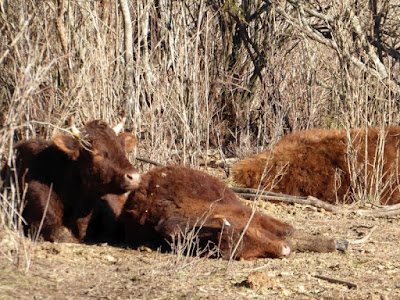 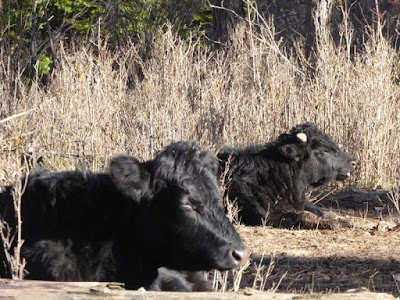 Robins have returned with a vengeance. 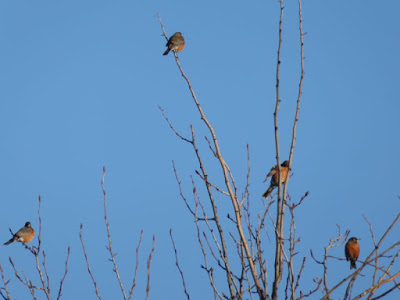 I put on my visor, grabbed work gloves and a pitchfork, and headed for the garden. I wasn't sure what I was going to do in the garden, mind you. I just wanted to be outside.

After looking around for a few minutes, I settled on a project. This strip of weed-infested dirt right next to one of the strawberry beds didn't have the benefit of tarps and gravel for weed control. During the summer, it was so overgrown as to discourage me from weeding the strawberry bed. So -- time to fix it. 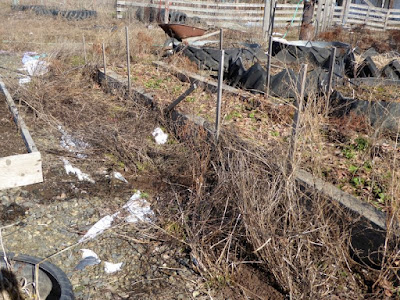 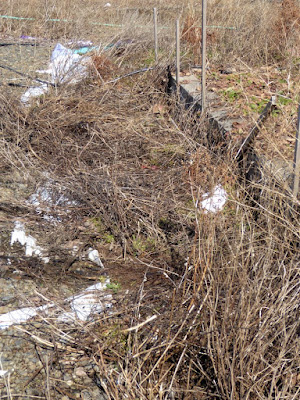 Besides, new growth was already starting. Time to get rid of it before it grew to enormous size. 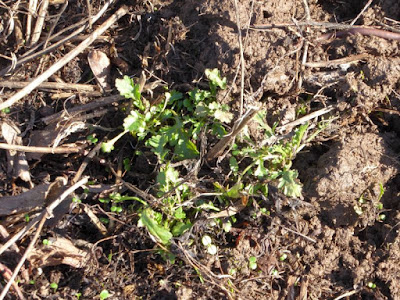 Wanting to share the day, I let Lydia into the garden, where she explored all over. 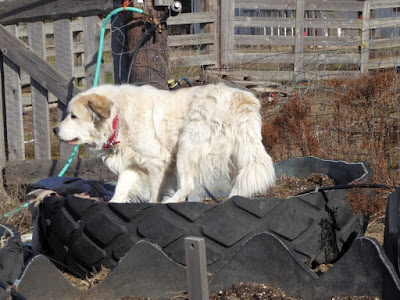 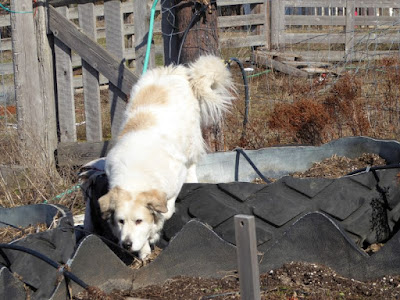 I started by raking the debris off the strip of ground. 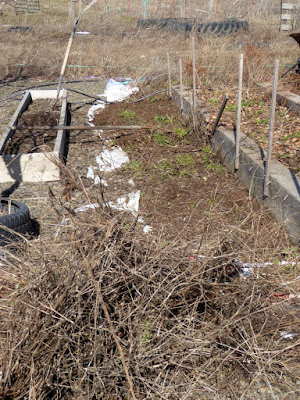 Then I dug out some of the bigger clumps of new growth, particularly those right next to the strawberry bed so they wouldn't grow around the edge of the tarp. 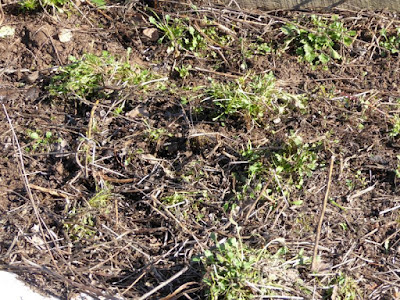 There were several volunteer strawberry plants which had rooted from runners. These I dug up and transplanted into the strawberry bed. 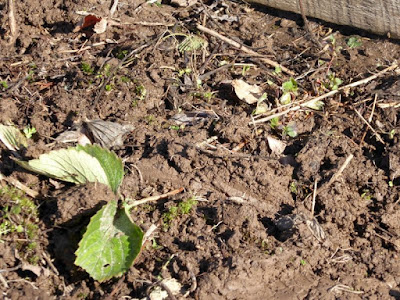 Then I spread out a tarp and cut off a wide strip, wide enough to cover the bare bit of ground with a generous overlap with the existing tarped area. 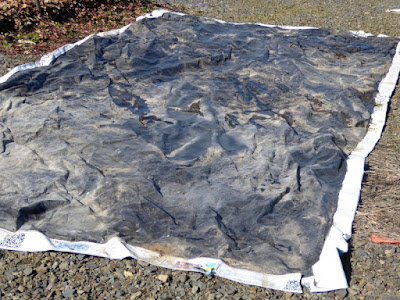 Meantime, I was disturbing voles. Voles galore. Lydia soon started to dig after one. She was in an untarped unfinished part of the garden, so I let her dig. 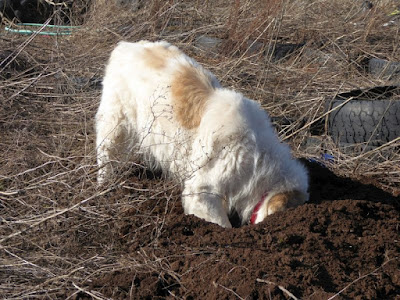 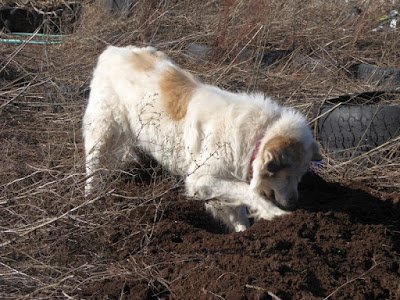 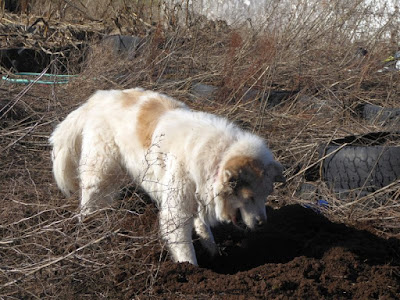 She never did catch the vole, but my goodness she had fun trying. Can you see her grin? 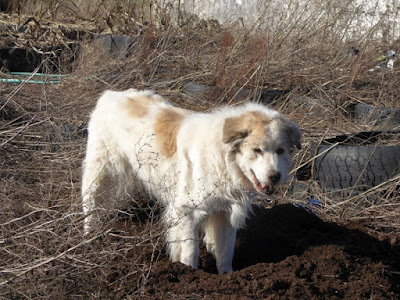 Anyway, back to the tarp. I laid the strip of tarp over the bare ground. 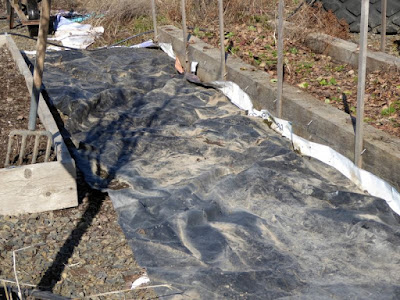 Time to transport some gravel. I used an ancient wheelbarrow we inherited from some friends, which has a body so rusted through it looks like lace. Yet it's still a surprisingly strong and useful tool. To transport gravel, however, I laid a piece of hardware cloth inside so the rocks wouldn't fall through. 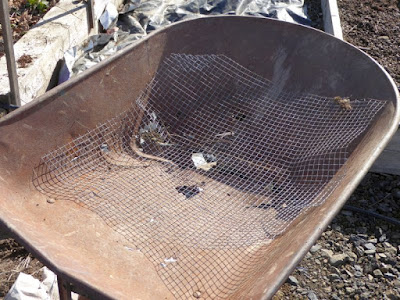 Moving gravel, one barrow-ful at a time. 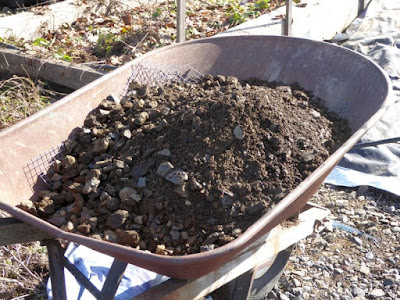 Six wheelbarrows later, the strip is covered with gravel. Never again will the weeds prevent me from walking through this section and attending the strawberry bed. 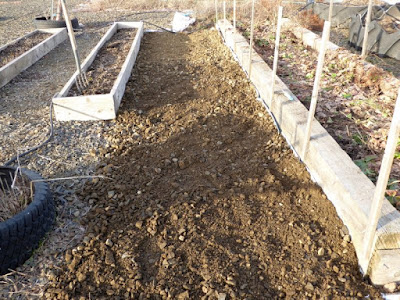 I'm absurdly pleased about this. It was a nice short-term project for a lovely day. By the end of it, I was filthy and sweaty (and I still had to clean the barn); but it also left me just plain happy. It was good to get outside and accomplish something in the garden.

It's the little things in life, y'know?

Posted by Patrice Lewis at 9:07 PM