This is our pasture fence. 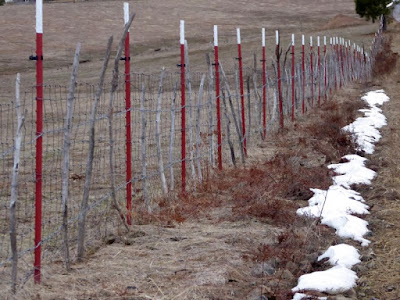 It follows the dirt road leading to our house. 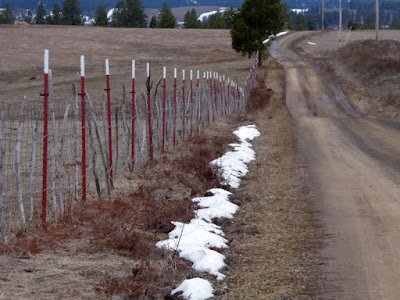 Originally this fence was just a triple strand of barbed wire, which (we learned) was pretty useless to keep cows in. Later we reinforced it with sticks, which helped a great deal; but still, calves could slip through. So later, after salvaging some field fence, we reinforced the fence line and made it cow-tight. 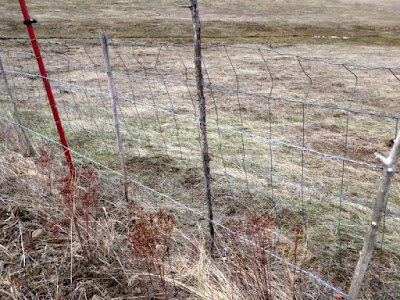 On Tuesday afternoon Don and I took Lydia for a walk down the dirt road, following the fence line. After we got home, I jumped into the shower. When I emerged fifteen minutes later, Don said, "We have a dead deer in the pasture."

What? But we just walked past the pasture. It was empty.

It seems a lot happened in the fifteen minutes it took me to wash my hair. A neighbor called in tears. She was driving down the road in broad daylight (average speed on our road is about 10 mph) when a deer in our pasture decided to bolt in front of her. (This is a common habit with deer. I have no idea why they do it.) But it never made it to the road. Apparently it didn't see the fence at all -- despite the sticks and T-posts -- and crashed full-speed into it, bounced off, and lay struggling on the ground with a broken neck.

When the neighbor called, Don grabbed a firearm, jumped in the car, and raced over to put the poor animal out of its misery. Before he got there, however, the deer expired. So he came home. All this happened while I was in the shower.

I saw the deer the next morning, lying there with a pitifully twisted neck. By this point no one was inclined to harvest it for meat; so later in the afternoon, while I was in the city doing errands, Don took the tractor, chained up the deer, transported it to a remote spot, and left it for scavengers. We didn't want to leave it in our pasture lest it attract predators.

By the time I got back from the city (fully intending to take pictures of the animal), the only thing left were some bloodstained tufts of fur. 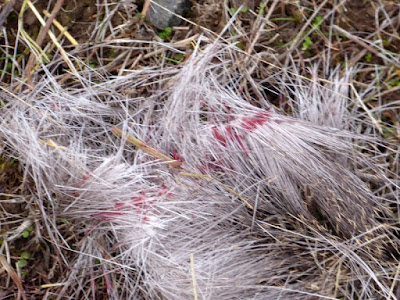 (Maybe it was a good thing I didn't get pictures.)

The damage to the fence is grimly impressive. It's hard to see in this photo, but there's an enormous bulge. 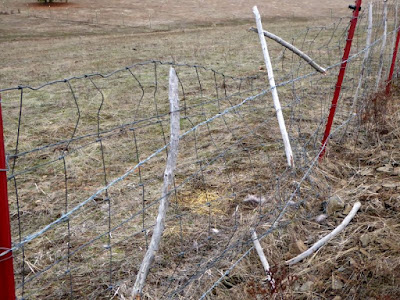 Here Lydia's sniffing at the ground in front of the fence. You can see the bulge a little better, in front of her. 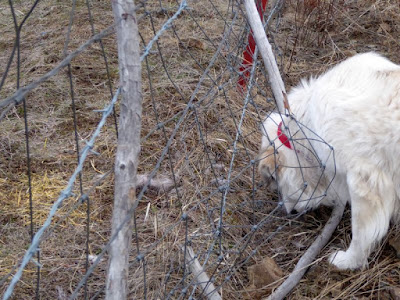 The impact snapped the sticks in multiple places. 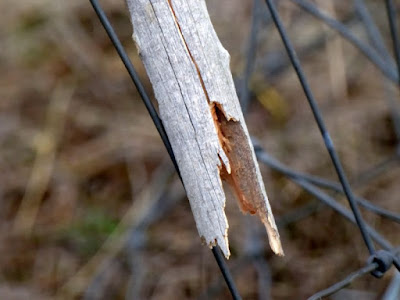 Why deer bolt in front of vehicles is anyone's guess. I suppose it was concentrating on crossing the road and simply didn't see the fence in its way. At any rate, it was a big, fatal OOPS -- but at least it was a quick death.