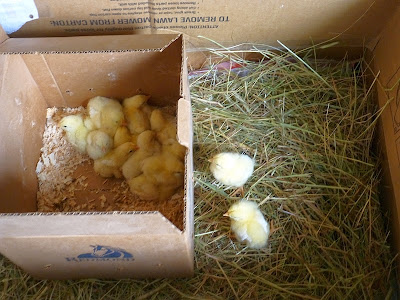 These are Cornish-Cross chicks, a hybrid chicken that gains weight with a speed and seriousness awesome to behold. They're darling little balls of fluff right now, but in eight weeks (literally) they'll be grotesquely huge and ready to butcher. 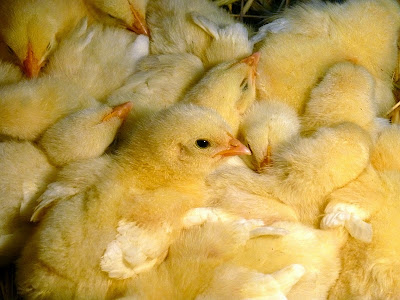 This breed is the standard meat breed of chicken you'll find in grocery stores across the country... but they can't be bred true because they won't live long enough to reproduce. As they get older, they get so heavy their hearts give out, and their legs give out. It's kinda freaky, really.

While many other breeds of chickens are "dual purpose" (eggs and meat), Cornish crosses are single-purpose: meat only. Other common chicken breeds are fine to eat, but don't produce the lovely huge roasting chicken-size birds.

Don and I started wondering -- can we breed Cornish Crosses? Turns out they have a rather complicated tangle of genetics that precludes the home breeder from duplicating the exact lineage that produces these dedicated fast-growing birds.

So instead we're going to take a different approach. At some point in the future we're going to start a parallel flock of birds ("parallel" meaning we'll try to keep the flocks separate to discourage cross-breeding) of Jersey Giant chickens. These are a true breed which is considered "heritage" (rare). The males reach about 14 lbs., the hens about 10 lbs., extremely respectable sizes for butchering.

Besides their size, Jerseys are known for two additional characteristics: their dependability for laying during winter months (when many other chicken breeds fall off) and their sweetness of disposition. And their bodies won't fall apart like the bodies of Cornish Crosses, so we can keep a breeding flock indefinitely. Apparently the hens are so heavy, however, that they've been known to break eggs as they brood them, so we'll have to incubate eggs to get chicks (not a problem for us).

Jersey Giants come in three colors: white, black, and "blue." The blacks are larger, so we'll start with blacks with maybe a few blues thrown in for fun. 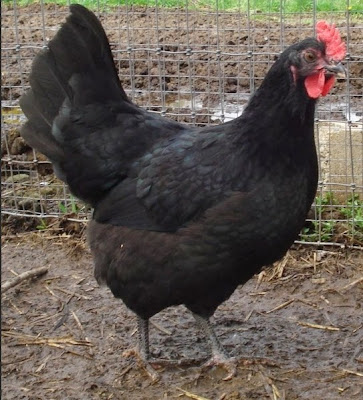 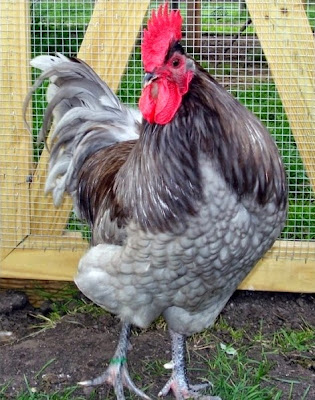 Half the fun of a homestead is experimenting with new things. I'm looking forward to when we can build the facilities to house our parallel flock and order some Jersey Giants!
Posted by Patrice Lewis at 5:40 AM