Poking fun at the tinfoil hats

Recently CNNMoney featured an article entitled What I saw at the Doomsday Prepper Convention. The article begins sensibly:

More and more Americans are spending money to get ready for an uncertain future -- gathering food, water, tools, and skills to help them weather anything from a hurricane to a pandemic. Contrary to images of deluded or gun-obsessed "lone wolves," many preppers are average consumers reacting to concrete worries, and their way of thinking is spreading, fueling an emerging lifestyle trend.

The reporter seems a little surprised (and maybe just a wee bit disappointed) that the attendees of this convention were so… well, normal. I think he was hoping to see a bunch of tinfoil-hat-wearing crackpots wandering around. (To his satisfaction, he finally did find a couple.)

Instead, the reporter was informed by the show producers that the “core audience is 40-75 years old. Eighty percent have college degrees. Twenty percent of those have advanced degrees.”

Ouch. So preppers are educated, normal people. Where’s the fun in that? How can we poke fun at college-educated middle class folks with the good sense to look to their future?

Critics of the prepper crowd have yet to be able to adequately explain why being prepared is a bad idea. What's going to go through their mind when a hurricane is roaring down upon them? Are they thinking how stupid their neighbor was to have what he needed in advance? Or is he thinking how likely his neighbor might be to share the necessities of life with him when the power goes out for three weeks?

People like to think that because we live in modern times, complete with instant communication, electronic marvels, and superb medical knowledge, that we are immune from the economic, political, and natural forces that have shaped history again and again and again. The arrogance of that assumption is breathtaking. As Don is fond of pointing out, the greatest arrogance of mankind is “It can’t happen to me.”

In nature, animals are constantly on the alert to danger. They’ve learned to trust their instincts and react accordingly. But in humans, we’ve lost that ability. We ignore red flags, disregard the signs of impending doom, and ignorantly assume “It can’t happen to me.” We expect others to provide for our needs if hard times come, rather than preparing for those needs ourselves, to the best of our ability.

Despite admitting that the conference focused on learning and products rather than conspiracy-laden stuff, the reporter couldn't help but highlight the few nutjobs he did meet. He concludes by writing, “While normalcy and centrism may be the goal for businesspeople like [the show producers], it seems the preparedness lifestyle hasn't completely shaken loose its extremists and kooks.”

Hmmm. Mr. Reporter, has it occurred to you that you're actively looking for the "extremists and kooks," while ignoring the regular folks with legitimate concerns? Why are you so determined to focus on the extremists at these events? I realize that extremism is the lifeblood of news ("If it bleeds, it leads"), but why are reporters so reluctant to admit that when smart educated people – doctors, lawyers, accountants, etc. – join the rest of the "tin foil hat wearing club," maybe it's because THERE'S A DARNED GOOD REASON FOR IT?

So I ask the rhetorical question – if “ordinary people” see something worth preparing for, why are you still trying to paint them with the broad brush of conspiracy-laden idiots?

What it boils down to is these reporters still can’t admit that there are unimaginably evil things going on in the upper echelons of government. Can anyone look at America’s debt and doubt that it is unsustainable? Can anyone look at Shadowstats and see the REAL unemployment rates, and compare them to the Great Depression? 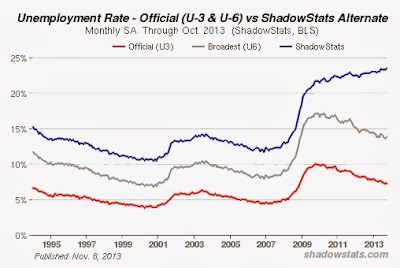 Perhaps someday these types of reporters who attend preparedness conventions will understand that the concerns of most preppers stem from a solid understanding of economics, political history, and the potential for natural disasters.

Posted by Patrice Lewis at 6:45 AM