A different answer to the economic downturn

A few weeks ago I read an article entitled Living on $5,000 a year, on purpose: Meet America's 'intentional poor.' It discussed those individuals who saw fit to withdraw from the consumer culture and live on very little money.

The idea of paring down to virtually nothing has, I confess, always fascinated me, even as I handle the day-to-day commitments endemic with a farmstead. 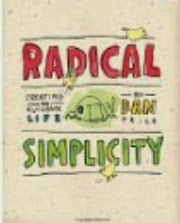 The article quoted Dan Price, who wrote a book entitled Radical Simplicity, which I purchased a few years ago. His ideas are indeed radical, but I can't argue with some of his logic. To quote the article: "I like being able to do what want to do. I don't believe in houses or mortgages. Who in their right mind would spend their lifetime paying for a building they never get to spend time in because they are always working?"

While this is sound logic, I can't agree with one aspect of Mr. Price's lifestyle choice: to live apart from the woman with whom he sired two children, because he couldn't hack civilization. Not good.

But judgment aside, this new crop of "intentionally poor" seem just as idealistic as the intentionally-poor hippies two generations before them. Like the hippies, participants in this movement look for other means to define themselves besides a career or a fancy house or an expensive car.

Yet many can't make it on their own; most are involved in mooching to some degree off others. "We saw how mortgage companies screwed people," says a young fellow who calls himself Banjo. "The economy is a joke. We travel all over, and people help us out." Banjo also admits that he can return to his childhood bedroom. (In other words, his parents help him out.)

I dunno, somehow it seems intellectually dishonest to bolster one's "intentionally poor" lifestyle by mooching. At least Dan Price earns his money, rather than sponging off others.

The distinction between the "intentionally poor" and the truly poor is, clearly, one of choice. "[N]o matter how bad the job market is," notes the article, "there are clear distinctions between those who have the privilege to opt for poverty and those who are poor through no choice of their own.

I suppose there's something to admire about those who decide to live with so little. Even their sponging is, presumably, mooched from volunteers. (My admiration ends when their decision to take public assistance begins.)

Whatever your views on this intentional poverty, one thing is fairly clear: if/when this country experiences a REAL nasty unpleasant downturn, these people will at least have the street-smarts to survive.
Posted by Patrice Lewis at 6:07 PM