Now that the weather has cleared and Snoqualmie Pass is passable (on a dependent basis, that is), Older Daughter is progressing toward obtaining a nanny position in the Seattle area. Yesterday she had a phone interview with a respectable placement agency, which termed her résumé "impressive" and basically said she could have any job she wished. Next week, she'll likely be heading west to interview in person with both the agency and with a prospective employer.

In the midst of these plans and arrangements, Don found a hilarious "help wanted" ad for a nanny profiled on The Chive. (Warning: Some inappropriate language.)

It seems a single female CEO with twin ten-year-olds is in need of some household help. At first the requirements seem fairly straightforward. 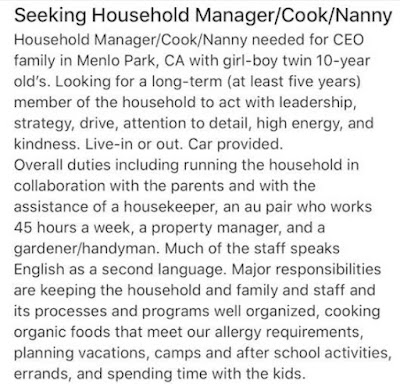 But as the old saying goes, "But wait -- there's more!" Dig deeper into the requirements and they get weirder and weirder, bordering on creepy. ("Has room in their heart to love the kids and the mom" "willing to work out together in the home gym with the mom...") 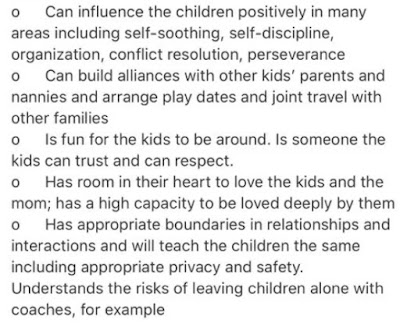 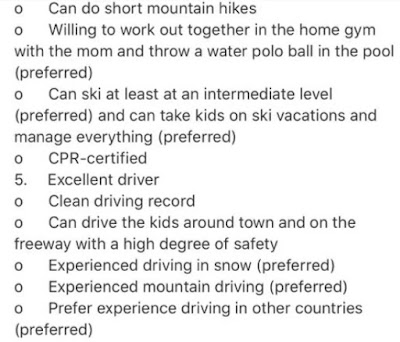 Go read the entire job description. It's jaw-dropping. Essentially the nanny must be an Olympic athlete in several different sports, a computer whiz, a vegan gourmet chef, a college professor, a CPA, an in-house Human Resources manager, a Ph.D. in psychology, fluent in several languages, and be "civil-rights oriented." Oh, and she has to like kids too.

Of course a single female CEO with ten-year-old twins is going to need some household help. I get that. But I genuinely wish her the very best of luck finding a suitable candidate. To me, this sounds like Mission: Impossible.

Posted by Patrice Lewis at 8:21 AM