We interrupt your boring, humdrum lives to bring you a slice of Rich'n'Famous ridiculousness.

Recently Daily Mail UK profiled a "gigamansion" being built in Los Angeles which will have "20 bedrooms, 30 bathrooms, a 30-car garage, a two-story waterfall and a 40-seat home theater." Oh, and don't forget five (five!) swimming pools, "a temperature-controlled room for storing fresh flowers and a sitting room surrounded by jellyfish tanks instead of walls." The price is a trifling $500 million. Half a billion bucks. 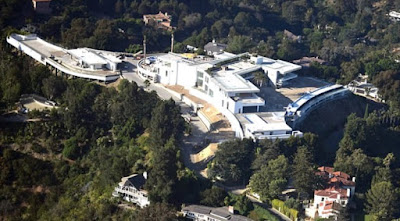 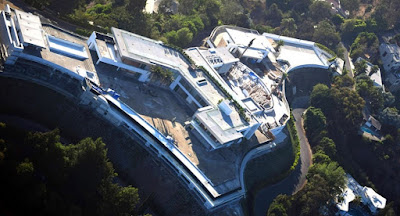 (Aniston is no slouch in the Rich'n'Famous ridiculousness category. Apparently her husband "admitted that his wife had so many outfits that they had to renovate one part of the garage area into a 2,000 sq ft wardrobe at an estimated $60,000 cost. 'We made an extension on our house. We found more room to sort of create a better bathroom and a closet,' he says.")

Far be it for me to ever find common ground with the likes of Jennifer Aniston, but I do find myself sympathetic in this case. At 100,000 square feet, it's like having a mall built right next door.

I found myself particularly struck by the five swimming pools. Why five? Is there a different pool for each day of the week? For different moods? Why just five? Why not, say, eighteen? Are the potential buyers of this gigamansion such avid swimmers that they require five pools to meet their needs? 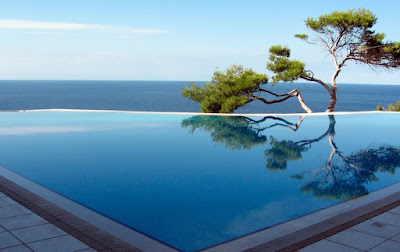 These kinds of "gigamansions" are almost comical in that the developers seem to run out of ideas for new luxurious amenities to include, so instead they fall back on building multiples of stuff, like swimming pools. I guess there comes a point -- when the size is off the scale -- that architects just don't know what else to add. "I know -- we'll add another pool and push the house's square footage up another 10,000 feet!"

The developer himself admits most of what he's building is for show. The glass-walled library will have a double-height ceiling and be surrounded on three sides by water, but it's not a place for reading. "Nobody really reads books," the developer says, "so I'm just going to fill the shelves with white books, for looks." 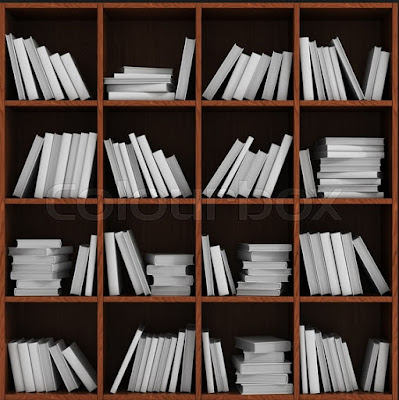 (Bonus question: If "nobody really reads books" anymore, why did you include a library?)

The house is being built on spec. "We have a very specific client in mind," says the developer. "Someone who already has a $100 million yacht and seven houses all over the world, in London and Dubai and whatever. To be able to say that the biggest, most expensive house in the world is here, that will really be good for LA."

GQ Magazine notes something funny about these enormous homes: They're not really homes "in the usual sense of the word. Most buyers live on other continents and visit these properties for only a week or two each year, using them mainly as places to park their wealth." (In other words, it's the world's most expensive hotel.)

As it turns out, there is another gigamansion already built in Los Angeles, this one a paltry $250 million and a modest 38,000 square feet. By gigamansion standards, its amenities are lowly: 12 bedrooms, 21 bathrooms, three kitchens, six bars, a massage room and spa, fitness center, two wine-champagne cellars, two commercial elevators (lined in alligator skin), the "most advanced home theater in any U.S. home," and an 85-foot infinity pool. 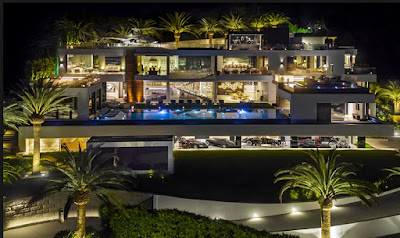 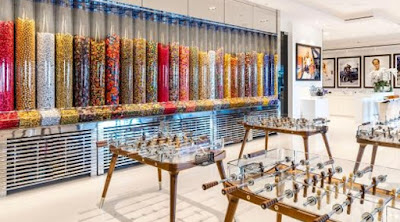 It comes pre-furnished with $30 million worth of cars, millions in fine art, and six-figure Roberto Cavalli table settings, thus saving the busy billionaire valuable time and energy in selecting his possessions himself.

Forget owning such a place. I think the very best position to be in would be the live-in staff.

This has been your glimpse into the lifestyle of Rich'n'Famous ridiculousness. You may now return to your regularly scheduled boring, humdrum lives.
Posted by Patrice Lewis at 10:03 AM