Two is one, one is none

I wear glasses. I've worn them since I was ten years old. Without them, I am comically blind.

I wore contacts for many years, but as I've gotten older I got tired of fussing with them, so I reverted to wearing glasses exclusively.

About three years ago, I decided it was time to get my eyes checked (first time in well over ten years) as well as select some new frames at Costco. I was pleased to find my eyes hadn't gotten any worse since my last exam. Despite the expense, I decided to order three identical pairs of glasses.

Why three? Because we're preppers. Two is one, one is none. I put the two spare pairs aside and wore the third pair exclusively.

A few weeks ago, while working outside, I ran face-first into a head-high board I didn't see because my visor blocked it. Thankfully the visor squished down and protected my glasses, although it did splay them out a bit.

In fact, it splayed them enough that they were subsequently very loose on my face and kept sliding down or even falling off if I turned my head too fast. I decided next time I was in Costco I would see if they could be adjusted.

Then last night, in a moment of idleness, I thought perhaps I could tweak them back myself. I gently bent the frame -- and it snapped cleanly in half. "Aaack!" I shrieked. 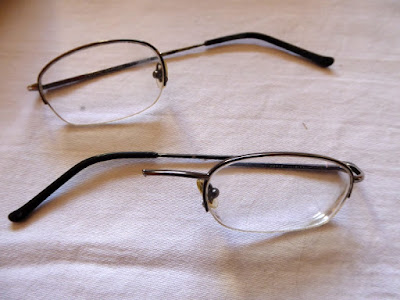 Groping blindly upstairs to our bedroom, I fetched one of the spare pairs of glasses, and could see once again. 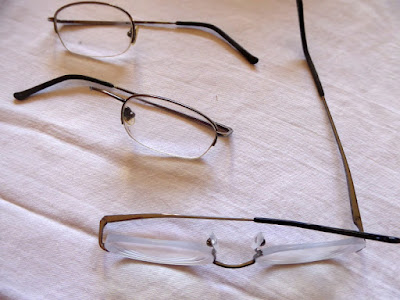 I'll take my broken pair back to Costco and see if they can be repaired, but I doubt it. Nor do I have hope they can simply slip my lenses into a new frame, since I'm sure the frames I got are now passé.

But I don't like being down to merely one spare pair of glasses ("one is none"), not for something as absolutely vital as my sight.

If, like me, you are utterly dependent on eyeglasses, keep this rule in mind: Two is one, one is none.
Posted by Patrice Lewis at 10:52 AM