Some startling footage emerged yesterday from a news helicopter covering traffic in Los Angeles: what might possibly be the worst traffic jam in America.

According to the article, "If these motorists thought setting off early would help them beat the Thanksgiving getaway rush, it appears a few others had the same idea. ... The news channel’s helicopter captured the 'complete gridlock' on the 405 motorway, one of the busiest and most congested routes in the United States."

The short video embedded in the article starts out bad enough: 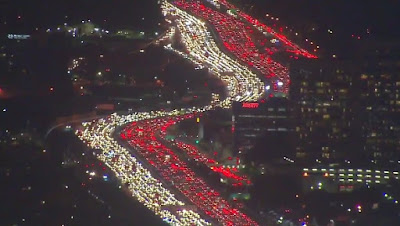 Then it pans back and gets even worse: 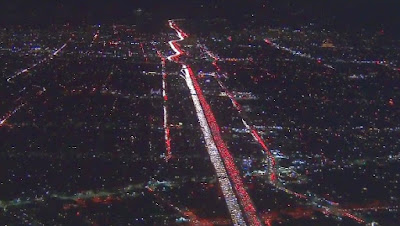 "It's like the red and white blood cells flowing through the major arteries of the city," wrote on person. "Pretty, [but] wouldn't want to be in it."

This is a level of gridlock unfathomable in this area. To all my dear readers in Southern California, please be safe this holiday.
Posted by Patrice Lewis at 8:15 AM