The joys of Flyover Country

Yesterday we butchered four animals. These ladies were two troublesome mother/daughter pairs, three of whom were horned, and they routinely caused problems either by escaping fences or attacking other animals.

So when the region’s most revered mobile butchers, Potlatch Pack, rolled in yesterday morning, we had the herd down in the pasture and well away from the four targeted animals, which we kept in the rocky driveway area where mud and other complicating factors were minimized. 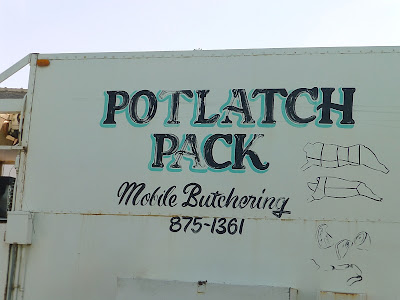 Don stayed outside to watch one of the butchers, a fellow named Chance, do his magic. I stand in absolute awe of Chance’s sharpshooting skills: one single clean shot in one of two preferred locations (either between the eyes, or better yet, a spot between the eye and ear). On this particular occasion, he peeked around the corner of the house and dropped all four animals within 15 seconds of each other. They literally didn’t know what hit them; they didn’t panic; they didn’t even realize their fellow herdsmates were down. The animals didn’t even kick or struggle. They just – dropped.

Chance and his helper had the animals processed (gutted, skinned, quartered) within a few hours, then with a cheerful wave they were on their way. The carcasses will be hung in a cooler for about ten days, then cut, wrapped, and frozen.

Whenever I read about someone in their ivory tower complaining about the backward rednecks in Flyover Country, I think about the wonderful, humane, efficient people working for Potlatch Pack. I know the type of people among whom I prefer to spend my life. Give me the “backward rednecks” like the Potlatch Pack folks any day.
Posted by Patrice Lewis at 8:10 AM