Battening down the hatches

For some time now, we've been anticipating the first significant snowfall. We had a dusting a while back, but nothing big. But yesterday's weather called for a dump of the white stuff.

And although it threatened here and there to make that dump imminent...

...it didn't really start snowing until about midnight.

So yesterday I took the opportunity to do some cleanup around the driveway area. We know from past experience how annoying it is to have the ground covered in snow for six months, then after it melts find missing tools, assorting boards, and all the other flotsam and jetsam around a farm.

I started by scrubbing out the cows' water tank. This had gotten overgrown with muck sliming the sides and bottom. 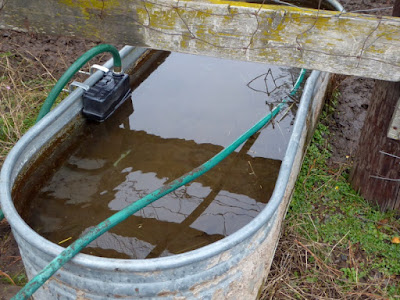 This tank had a float valve on it all summer and fall, a handy device that keeps the tank perpetually full. But we can't use it in the winter because the hose connecting to the water tap will freeze. 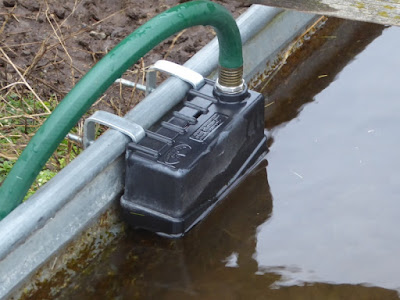 I drained the tank and gave it a good scrubbing... 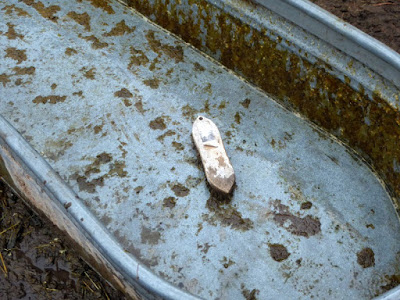 ...then filled it with fresh clean water. We'll also put in a tank heater to keep it from freezing. 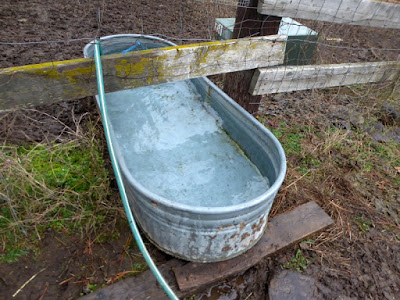 I went around the area picking up random assorted debris. Some if this is trash, some goes on a burn pile, and some gets piled near the shop so we can chop it into burnable lengths for the woodstove. 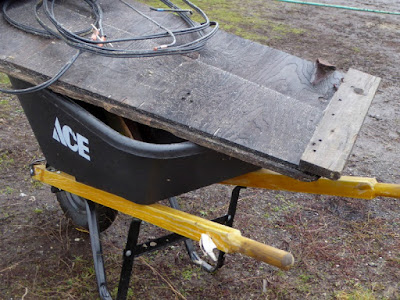 This is stuff for the burn pile. We'll burn next spring. 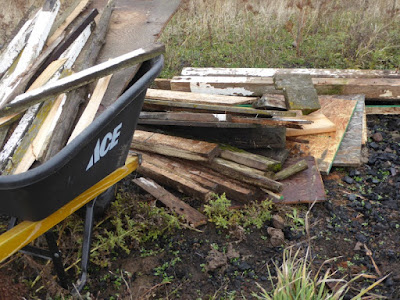 This old rotten hay bale probably weight 150 lbs from all the water it had absorbed. It got pitched on the burn pile too. 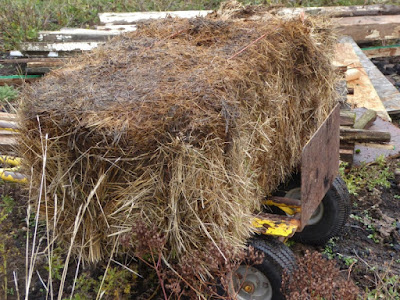 I anchored things that could get flipped in the wind with heavier objects. 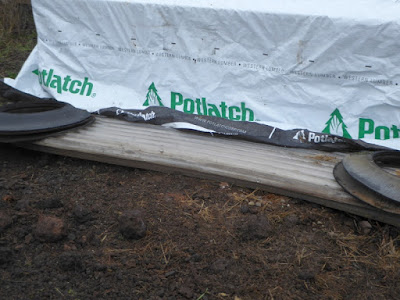 I drained and coiled all the hoses, and stacked them in the barn. Don and I also folded and put away assorted tarps. 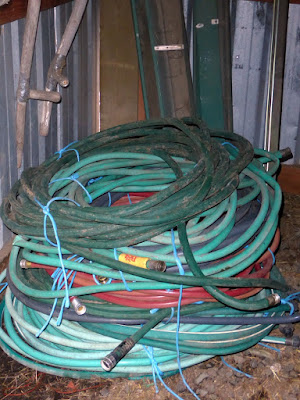 Despite a freezing wind, I also went out and picked the peas that were ripe. 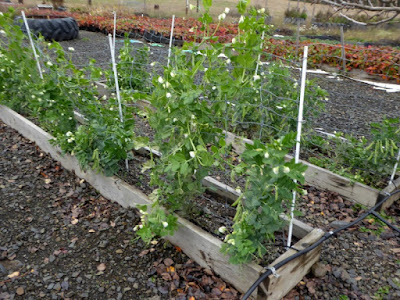 Yes, these amazing peas were still clinging on. I just had to accept the fact that they weren't going to ripen any further. 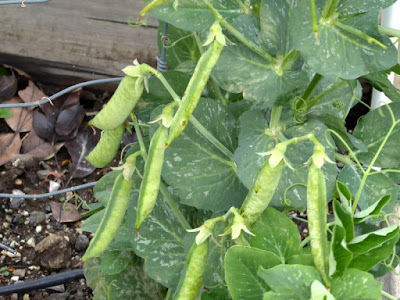 It was a fairly small haul for a second planting, but hey, it was an experiment. I'm happy to get any. 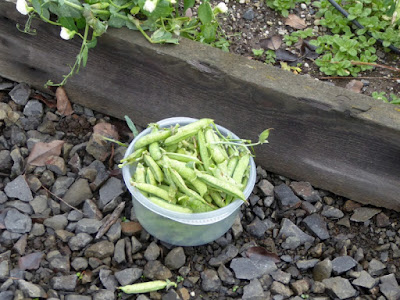 This morning we found it had snowed about four inches. For Younger Daughter, who is working in Coeur d'Alene, it was her first time driving in snow. She left when it was barely light. 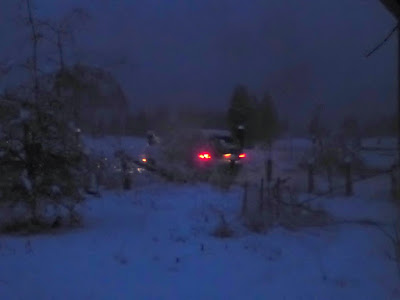 As is typical, the chickens didn't know what to make of all that white stuff on the ground. The half-grown birds, particularly, had never seen snow before. They refused to leave the coop. 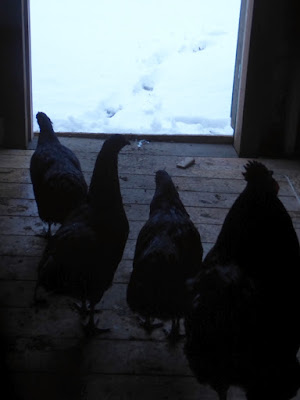 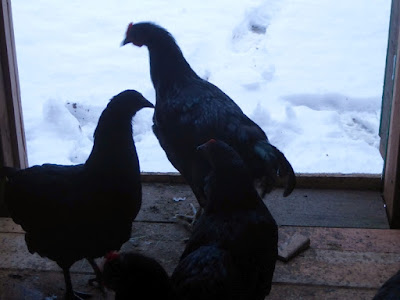 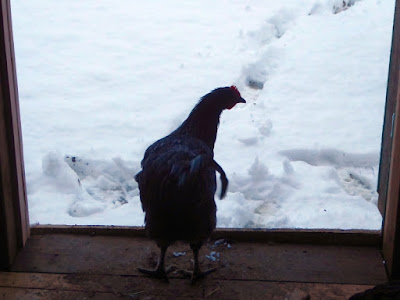 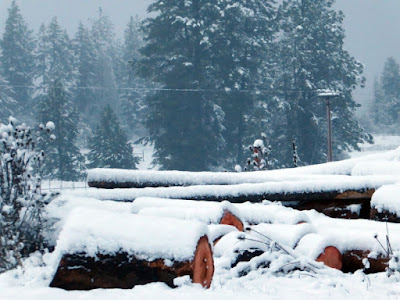 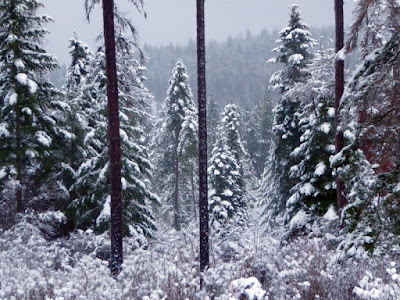 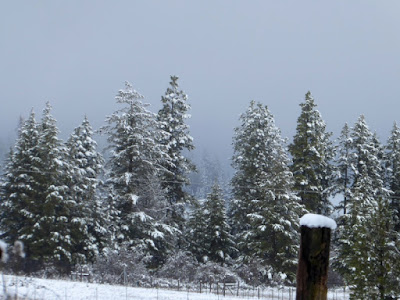 The snow is quiet and pretty and peaceful. Yesterday's cleanup efforts seem far away and even unnecessary (though I'm glad they're done). Until the snow melts, we'll enjoy the transformed world around us. 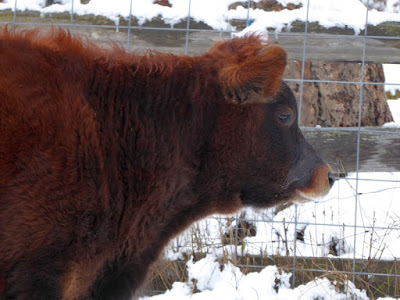