We butchered four animals last Monday, so I was tasked with cleaning out one of the chest freezers in anticipation of the estimated 1400 lbs. of meat which will be returning (and which, fortunately, we're not all keeping).

One of the items to clean out was the bags of frozen tomato purée I had saved up from the garden's bounty over the summer. 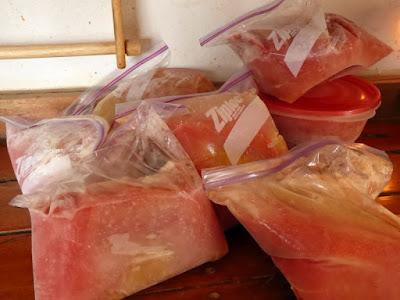 I wanted to turn the tomato purée into tomato sauce. I'd never done this before (mostly because prior to this I'd never had such beautiful purée, thanks to the use of a food strainer), so this was new territory for me.

The basic premise in making tomato sauce is to get rid of a lot of the water which occurs naturally in the purée by cooking it off (some people "bake" it out by baking purée in an oven at low temps). Since we had the wood cookstove going anyway, I simply nested two large pots and set them on the stove. I fit about half the frozen purée into the inside pot. 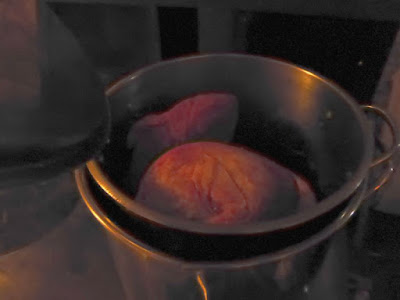 The idea behind nesting the pots is to make a double boiler. The outer pot is filled with enough water to surround the inner pot, up to the level of the contents. The water boils, which heats the contents of the inner pot but doesn't burn it. I've burned enough stuff in my career to welcome the gentle, consistent heat of a double boiler setup. 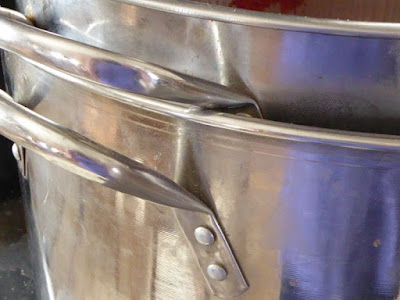 The rest of the frozen purée I put in large bowls on the table to defrost. 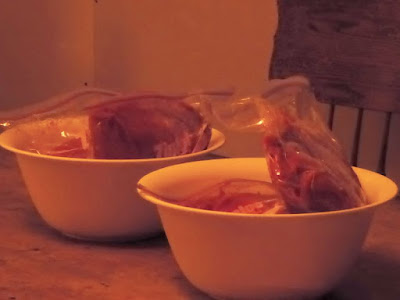 All night long the purée sat on the cookstove, slowly defrosting and then heating. It stayed thin and runny and I despaired of ever making sauce. 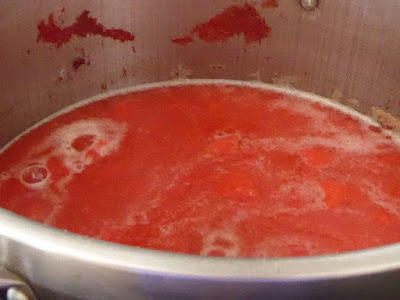 In fact, it stayed on the cookstove for three days (as in, 72 straight hours). Periodically I added water to the outer pot (so it wouldn't boil dry) and wondered if I was wasting my time.

And then something magical happened: it cooked down into the most beautiful smooth tomato sauce you ever saw. Somehow I couldn't believe it, but it was true.

Meanwhile, the frozen bagged purée I had put in bowls to defrost had one beneficial side effect I hadn't anticipated: a lot of the watery portions leaked out of the bags, leaving the more solid portions inside. I simply poured off the watery leakage. 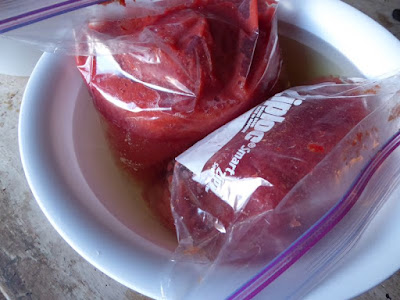 When it came time to take the first batch off the stove and put this second batch on, it cooked down much faster. I'll do this with all of it next time. Live and learn!

By the time I was done, the sauce was magnificent. 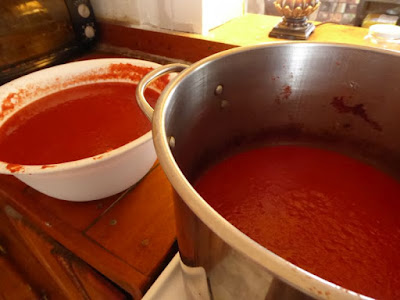 At this point I could have flavored the sauce any number of ways, but I didn't for two reasons: One, I wanted the sauce to be suitable as a foundation for any number of dishes, so bland is best; and two, adding additional ingredients (onions, peppers, mushrooms, etc.) would mean I would have to pressure-can it instead of water-bath can it. So I kept it plain. 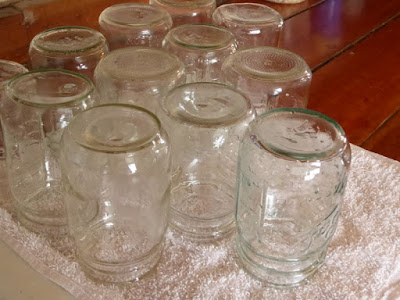 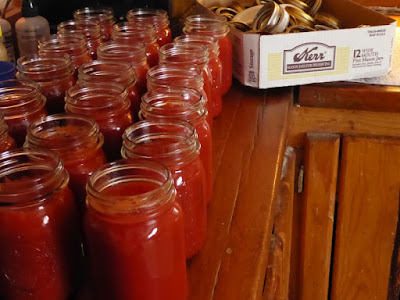 See how beautiful it is? Like jars of rubies. I'm always tickled when a new project works. 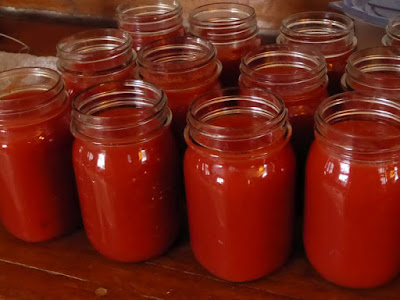 Before canning the sauce, I added a tablespoon of vinegar to each jar as an acidifier. Modern tomatoes, even "heirloom" or non-hybrid, have a lot less acid than their ancestral forebears. It never hurts to add a bit more acid just to play it safe. 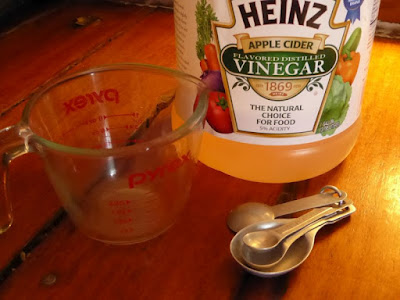 I was too cowardly, however, to do the actual canning on the wood cookstove (another frontier I will have to conquer at some point). I canned it on the propane stove.

Now that I understand how to make sauce from purée, I will probably sauce the vast majority of tomatoes I get in the garden next year. Nothing beats having sauce on hand for any number of pasta dishes, casseroles, soups, etc.
Posted by Patrice Lewis at 9:51 PM