Another one bites the dust

Remember the old song by Queen, "Another one bites the dust"...?

Well, that's what we're experiencing with vehicles. They keep biting the dust.

Anyway, that meant we were down to one vehicle, our Dodge Durango. It's been giving us some trouble, but after pouring $1200 into it in early January, we were confident it would last a while.

It lasted until Tuesday.

On that day, I was driving back from Coeur d'Alene after a day of errands. About halfway home, I suddenly heard BANG clunk clunk clunk clunk clunk etc. This happened on a bridge, so I slowed down, limped off the bridge, and parked on the side of the highway.

An hour later, the tow truck driver arrived and loaded the sad heap of the Durango onto his flatbed. He peered underneath the vehicle. "The transfer case cracked in half," he remarked. "I'll bet that made a helluva loud noise." Yep, it did. 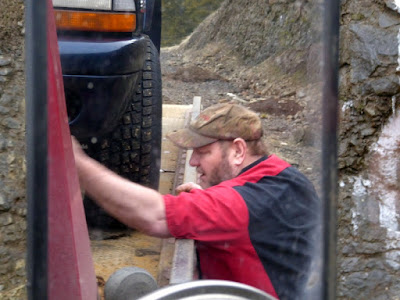 With the Durango on the flatbed, the driver headed down the highway toward home. 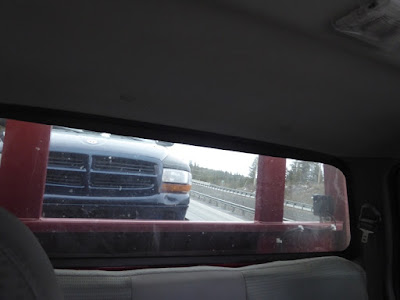 Here Don watches as the vehicle is offloaded. Now it, too, has a date with the Union Gospel Mission in the near future. 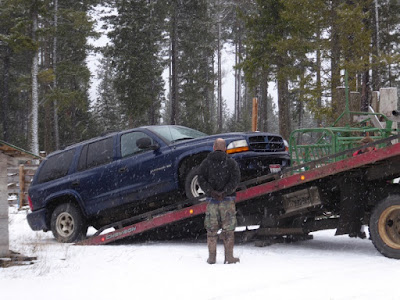 But meanwhile we were car-less. So this morning we borrowed a neighbor's vehicle and took ourselves into Spokane to go car-shopping. 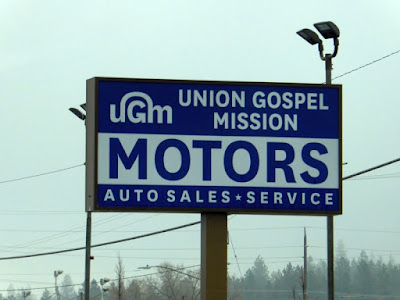 We had perused the car lot's inventory the night before and narrowed the selection down to two possibilities: a 2004 Jeep Liberty (with 130K miles) and a 2005 GMC Yukon (with 175K miles). After looking over both vehicles carefully, examining their service records and CarFax histories, and test-driving both, we decided the Yukon was just too big (not to mention $1300 more expensive), so we purchased the Jeep Liberty. 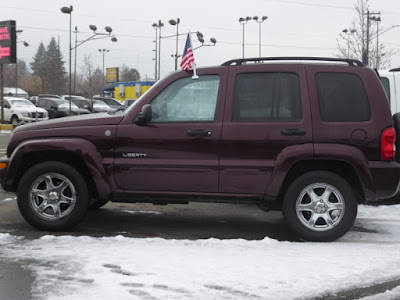 While doing the paperwork for the purchase with the salesman, we noticed another salesman whose desk was behind us had an open Bible (Isaiah) on his desk. What a nice sight. It's the kind of place the Union Gospel Mission is.

This vehicle was comically described as "Deep molten red," though I'd say it's more of a plum color. Don drove it home while I drove our neighbor's borrowed vehicle, and he is quite pleased with our purchase.

So there you go. With a little luck (and maintenance), our tidy plum Jeep will last many years and won't be "biting the dust" anytime soon.
Posted by Patrice Lewis at 6:19 PM

Email ThisBlogThis!Share to TwitterShare to FacebookShare to Pinterest
Labels: car